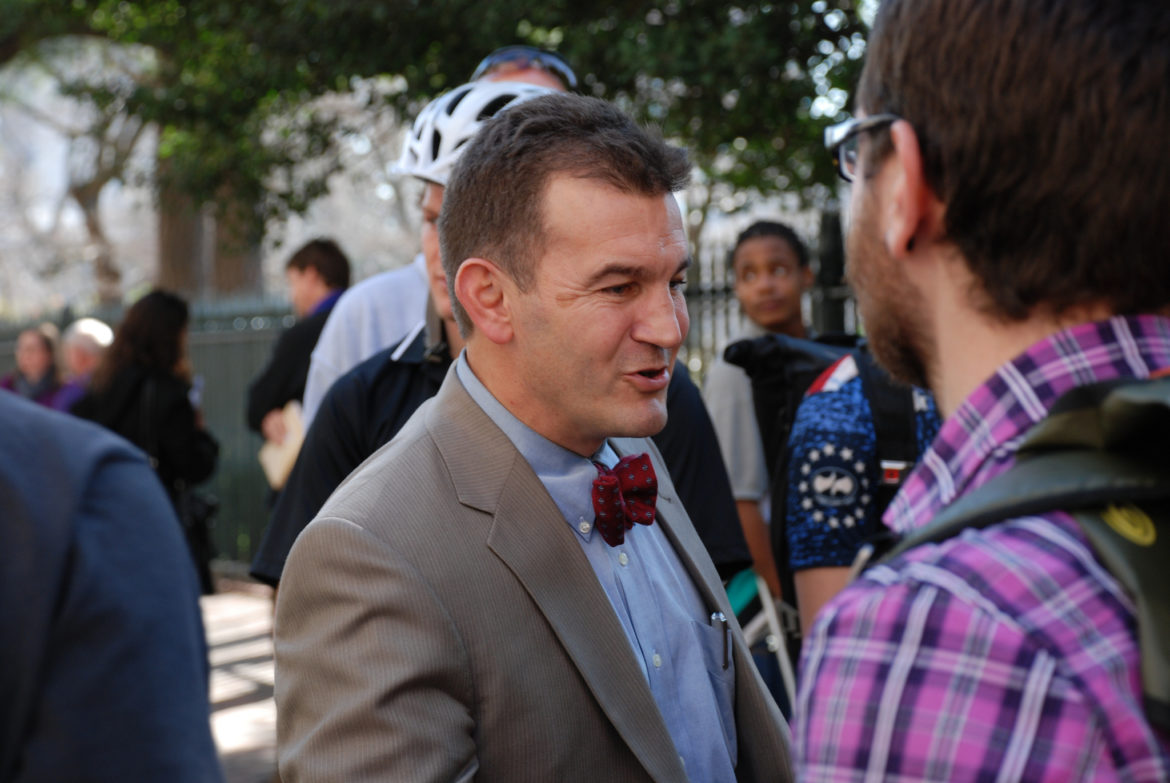 Virginia state Sen. J. “Chap” Petersen, who represents much of the state’s most populous county – Fairfax County – is challenging Dominion Virginia Power over the outsized influence he says it has with policymakers and a controversial provision of a law that became effective in 2015.

That law, which originated as Senate Bill 1349 and is being challenged in the state Supreme Court, prohibits prudency reviews by regulators of ratepayer charges by Dominion Virginia Power while also freezing “base rates,” but not “Rate Adjustment Clauses,” through 2019. It was billed as a way to shield ratepayers from costs to comply with the Clean Power Plan which the Trump administration is trying to reverse.

Dominion stands behind the merits of the bill regardless of what happens to the Clean Power Plan. Oral arguments at the Supreme Court are slated for April 21.

Sen. Petersen said he will continue trying to revoke the law and has stated he will no longer accept campaign donations from Dominion. He’s urging other lawmakers to do the same.

He recently spoke with Southeast Energy News about the controversy.

Southeast Energy News: Your outspokenness about Dominion Virginia Power, the utility bills you and other customers pay and the widely-perceived influence it has as the largest corporate contributor to lawmakers and candidates in Virginia is drawing more attention each month. What motivated you to take this stand?

Petersen: For too many years Virginians have seen the largest corporations get their way in our political system. It’s time to change. A single move by the governor could save more than a billion dollars for ordinary Virginians by restoring a longstanding Virginia policy of requiring refunds when public utilities earn excessive profits.

Initially styled in 2015 as a “rate freeze” for its Virginia consumers, the Dominion-sponsored boondoggle was (and is) just the opposite. While “base rates” are frozen, there is no value to ordinary consumers, since power bills are locked in above-market base rates.

Meanwhile, utilities can increase costs through rate adjustment clauses, or RACs, which add additional fees to consumer bills. Those add-ons currently constitute about 40 percent of a monthly bill, and that figure will increase as the 2017 Assembly adds new riders for costly hydroelectric and nuclear power facilities, as well as for [burying] existing utility lines.”

Why do you think Gov. Terry McAuliffe declined to delete that freeze on base rate and rate review portion of Senate Bill 1349 from the 2015 General Assembly during this month’s veto session wrapping up the 2017 General Assembly?

I think there have been times he’s crept around it but he’s said that I need to go find the votes [for a repeal]. I’m one of 140 members of the legislature. I’m not a lobbyist. I represent my constituents. The governor is the one with the staff to prepare [for a repeal]. If he sent down a bill, the Democratic caucus would support it, as would Republicans, especially in the rural parts of the state. He can simply repeal that section of SB 1349. Take the code book and rip that page out. This issue keeps growing. People are tired of big corporations dictating state laws.

How might this become an issue in this year’s race increasingly competitive race for Governor, beginning with party primaries on June 13?

You’re already seeing it. Ed Gillespie came out last (in late March) on the John Frederick radio show (heard throughout much of the state) saying if the Clean Power Plan were repealed, he would support the repeal of SB 1349. He’s on the record. Perriello has walked around it. He’s complimented me on fighting Dominion on this issue. Most candidates are watching and waiting. Now that the Clean Power Plan is being withdrawn, it makes this issue all the more pressing. They’ll have to take a position.”

In light of his responsibility to defend the state laws – which SB 1349 has been since 2015 — what do you make of Attorney General Mark Herring’s unwillingness to advocate clearly for ratepayers on this issue since then?

He was on the right side of this issue. I wish he would have come out stronger. There are some issues where you need to go speak to people.

Why don’t many Virginia help ratepayers understand the difference between the base rate portion of their utility bills and the total amount due every month, which includes rate adjustments that drive up what they have to pay?

Rate adjustment clauses can be a much as 40% of the bill. That’s why it’s a fallacy to compare Dominion’s rates to other utilities because that’s not what consumers pay. I have to tell people all the time, including fellow Democrats, that we don’t have the lowest bills among utilities on the East Coast. Dominion’s bills are 10th highest in the nation, according to (former Attorney General Ken) Cuccinelli’s amicus brief filed with the Virginia Supreme Court.

Who, or what organization, could educate consumers statewide about the distinction between base rates and the total amount due they pay each month?

This issue was completely off the radar until January. When I filed my bill it crept on to the radar. Then it started getting attention. This is becoming a public policy issue. People don’t know the details but they know Dominion is making more money than they should. This is what you get the way Dominion spreads donations to lawmaker like manure in a farm yard.

In early February, the Richmond Times-Dispatch published an opinion article by Dominion’s Senior Vice President of Corporate Affairs, Mark Webb, defending the company’s rates and its service record as a monopoly provider of electricity in its service territory. What are the points in that piece that you feel deserve to be refuted?

Again, the Op-Ed from Dominion in defending their legislation talked about “lowest rates.” For the reasons I’ve discussed, that is a fallacy – and fails to recognize the role of RAC’s in increasing the net cost to consumers. It also ignored the point that Dominion as a for-profit entity pushed for the current “freeze.” It was not raised by consumer advocates. In fact, they opposed it.

Should Dominion Virginia Power be authorized to build — and charge ratepayers for continuing to study whether to build — its 5th nuclear reactor at an estimated, record-high, cost of $19 billion using an untested technology on top of what is now a proven earthquake zone? RACs paying for that study are among those responsible for the amounts owed on utility bills.

At this point, I’m voting against any additional projects which will be RAC’s to the consumer, until the 2015 law is repealed. So from my perspective, the answer is “no.” At this point, I’m the only Senator on record opposing that study and extra charge.  I’m not convinced that we need it, and we certainly don’t need it if Dominion is allowed to earn excess profits on its current portfolio.

What are your plans on these fronts going forward? Realistically, what can result if your position about Dominion Virginia Power gains more support?

I’m talking to consumer and environmental advocates about a bipartisan program to introduce in the 2018 session, which would reduce the political influence of Dominion and increase the influence of consumers. There are a lot of ways to do this, under the current state Constitution. Once we change the power status, you’ll see lower electric prices and a greater emphasis on renewables. It’s that simple.