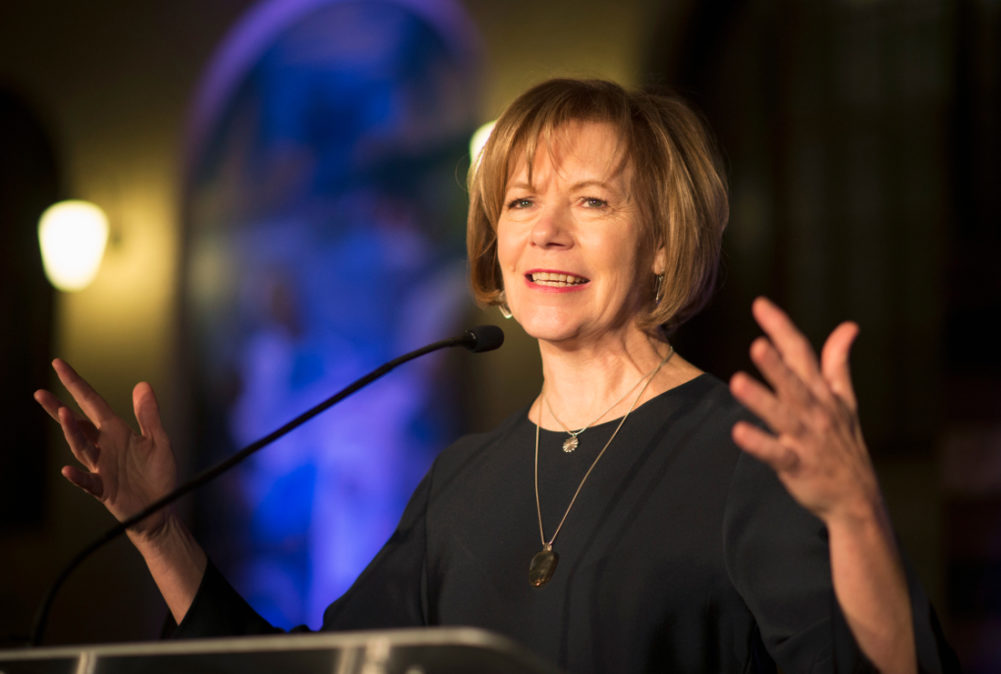 In Minnesota, Lt. Gov. Tina Smith has emerged as the Democratic party’s most outspoken proponent for clean energy.

As the second in command under Gov. Mark Dayton, Smith has spoken frequently about the environment and clean energy. She recently penned an op-ed calling for Minnesota to increase its renewable energy standard from 25 percent by 2025 to 50 percent by 2030.

It’s not unreasonable, Smith believes, since the state generates 21 percent of its energy now from renewables and will reach the 2025 target years ahead of schedule.

But the measure faces an uphill fight, despite bipartisan support. Clean energy and environmental regulations are under attack by some of Minnesota’s Republican legislators.

Bills have been introduced to abolish a renewable energy fund, impose restrictions and change the composition of the Public Utilities Commission, weaken state building codes and cut the budget of the Commerce Department, which oversees energy-related programs.

Smith spoke to Midwest Energy News recently about clean energy, the session and the challenge posed by the Trump administration’s policies. The interview has been edited for space and clarity.

Midwest Energy News: What benefits do you think the current renewable energy standard will bring businesses in Minnesota?

Smith: Ten years ago, the legislature came together – Republicans and Democrats – in a bipartisan effort to an advance renewable standard (as part of the Next Generation Energy Act of 2007). We’re almost a decade ahead of schedule. It galvanized the imagination of a lot of people in thinking we can do big things when we put our minds to it. What we have seen over these last 10 years is not only have improvements in Minnesota using more renewable energy but a great impact on the state’s economy.

We estimate there are now 15,000 jobs in the clean energy sector and $1 billion (annually) in economic activity. This goes to show that what’s good for our economy, environment and health, is clean energy. It seems to us, given the challenges we face and the opportunities that are before us, that we ought to continue to push forward on this. This why we’ve advanced the 50 by ’30 goal.

When you travel the state what are you telling people about clean energy?

I’m telling them you don’t have to choose between renewable energy and reliable energy. This is a really big issue, particularly for people whose businesses and jobs are reliant on the heavy industry and manufacturing. They’re worried we’ll have to make a choice between reliable energy and clean energy. But that’s a decision we won’t have to make because of improvements to the grid and the progress we’re making around energy storage.

Does cost come up?

Yes, they’re worried that renewable energy is going to cost more, and that’s not true at all. The cost curve for renewables, including solar and wind, has been going down substantially and they are very competitive with carbon-based fuels. When people hear about it in those terms they are very, very supportive. And they understand this is the direction the whole world is moving and Minnesota can either be at the forefront or we can be left behind.

When we adopted the 25 by 25 standard 10 years ago we were in the forefront. But other parts of the country are clearly moving ahead of us. California has adopted a much higher standard. What that means is innovation around clean energy is going to move to those places rather than Minnesota – and that’s a missed opportunity for us in terms of economic opportunity as well as cleaner air.

Legislative bills being proposed mainly by Republicans seem almost like an attack on clean energy. What will be the result?

I think it is incredibly short-sighted that they are making short term actions that are going to harm the economy of the state long-term. A lot of the proposals they’ve put forward are specifically to take away executive authority from the executive branch and the governor. I see that as a purely partisan attack on executive authority.

What’s the thinking behind the bills?

When our agencies implement rules to move forward they’re making decisions based on science. A lot of these efforts seemed to be geared toward taking science out of the equation and putting in its place the political ideas of politicians.

Will the governor be using the power of the veto?

The governor is quite clear that he is strongly opposed to laws that preempt executive authority and preempt the opportunity for local governments to set higher standards. A lot of these proposals actually slow down the permitting process rather than making it more efficient, which is what business interests want. We’re pretty far apart.

What’s your opinion of the Trump Administration?

We live in a world where we have a President of the United States and a head of the Environmental Protection Agency who appear to be denying climate change is even an issue that affects us…and that really is shocking.

The federal government set broad standards and leaves it to the states to implement and execute those policy goals. On the federal level (a budget reduction) can have a significant impact on our ability to protect air and water quality. If they pull back on the basics of environment protection it’s going to have a big impact.

Have you become the de facto spokeswoman for clean energy, at least on the Democratic side of the aisle?

I think that people in the Democratic Party are playing defense on a lot of fronts. They are trying to protect people’s access to health care and funding for schools, among many issues. They have a lot of things on their plate.

Is there any reason for optimism?

When I become lieutenant governor I had a chance to visit a lot of college campuses and I talked to so many students from all over the state. They wondered how can it be that the people in power right now are turning their back on this issue and saying it’s not a big deal when clearly it is a big deal. I feel a real responsibility to move clean energy forward.