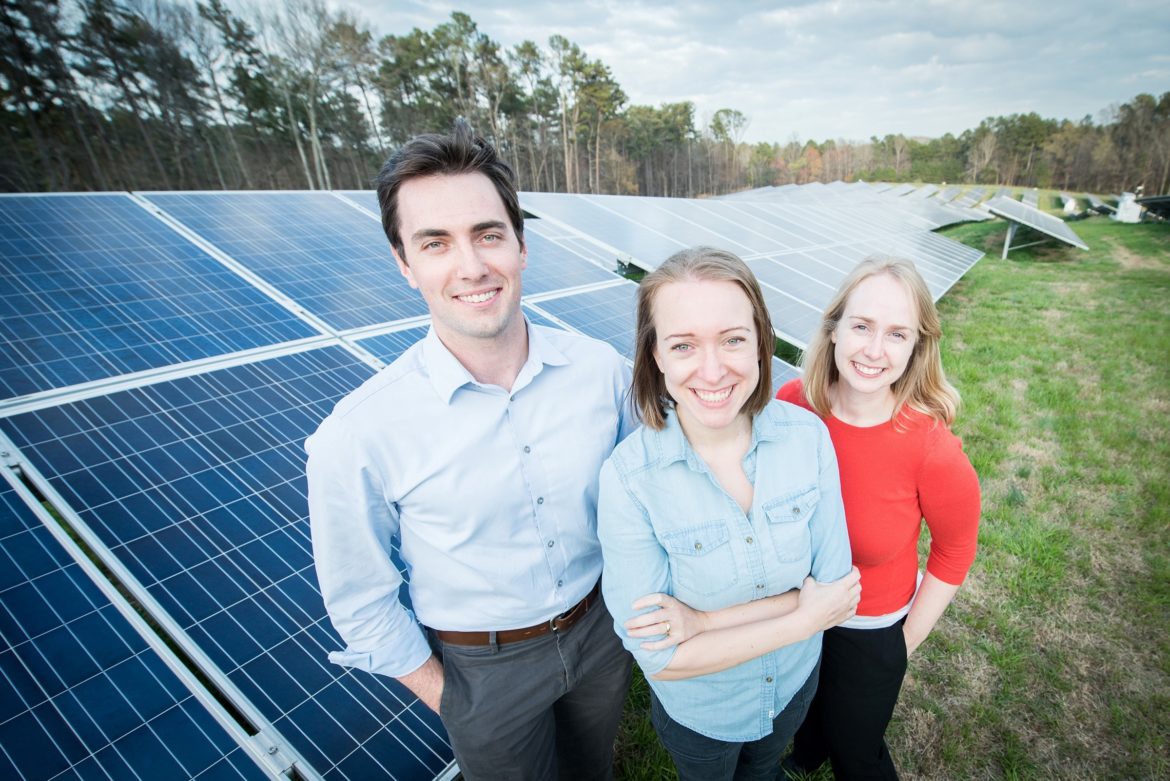 As environmental groups look to the courts to defend clean energy policy under a presidential administration hostile to regulations and climate commitments, a Southeast advocacy group may provide a template.

Over the past 30 years, the Southern Environmental Law Center has helped advance clean energy policy and fight pollution in deeply conservative states through a litigation strategy developed by its founder, Rick Middleton.

While Middleton was working mostly amid adversarial circumstances with the Sierra Club’s Legal Defense Fund in Washington, DC in the mid-1980s, he lamented the absence of a proactive force for clean energy and environmental protection in his boyhood home in Alabama and other Southeast states.

Today, clean energy advocates agree SELC and its band of about 70 attorneys has become a legal and advocacy force to be reckoned with in courts and state capitals.

Middleton, who shuns the spotlight and declined to be interviewed, first spelled out his vision to the W. Alton Jones Foundation and they responded with enough money to begin work and establish a headquarters in Charlottesville, Virginia.

Middleton’s first target, according to board member Jeff Gleason (one of Middleton’s first attorney hires and SELC’s first Deputy Director) was promoting energy efficiency as a demand-side resource alternative to new power plants in Georgia. He took some lessons learned from what the Natural Resources Defense Council and Environmental Defense Fund were accomplishing in California and what the Conservation Law Foundation was achieving in New England.

But his strategy clearly needed to be fine-tuned for the Southeast, where utilities and their holding companies exercised outsized influence over policymakers.

This meant, Gleason said, “finding ways to work with utilities, getting involved with (public utility) commission proceedings and ultimately getting the commissions to order collaboratives where utilities provided the funding for neutral experts . . . in the design of utility efficiency programs.”

Steve O’Day, another early board member, recalled how Middleton and Gleason “very carefully and professionally began developing relationships” with both key utility executives and policymakers and their senior staff.

O’Day and Gleason agreed this is what helped put SELC on the map. Its first collaboration was with Georgia Power’s now CEO, Paul Bowers, to find common ground on demand-side management initiatives.

“Georgia Power was experimenting with residential programs largely to capture market share from gas utilities as opposed to pure energy efficiency, but there was still some good work being done. We worked with the utility but we were fighting them too.”

“When the IRP rules passed, that was the moment, for me at least, that I realized hey, we could really do something,” Gleason said. With that, Middleton later succeeded in securing funding from the Turner Foundation to open an office in Atlanta.

“SELC and other advocacy groups play a role in public policy,” Georgia Power spokesman Craig Bell said. “Through our regulatory process and open dialogue, we have found common ground on energy efficiency and other matters.”

After the agreement with Georgia Power, SELC struggled to find issues it could make a significant impact on as states dove into proposals to deregulate the electric utility industry in the late 1990s and early 2000s. That wasn’t SELC’s forte.

“We were pretty much back to ground zero and had to start again making the same arguments” for cleaner energy options,” Gleason said.

That is until George W. Bush, as president, elected not to pursue a highly-visible push by President Bill Clinton to impose, under “New Source Review” amendments to the Clean Air Act, stricter emission limits on power plants whose life was being extended by utilities.

The litigation, which made its way to the Supreme Court, and which the administration lawyers tried to circumvent, resulted in a rare 9-0 vote in 2006 in favor of requiring utilities to get pollution controls on “new” sources of generation.

“That was definitely the highlight of our energy work up until then,” O’Day said.

That work, O’Day said, “kind of sets a precedent for what we’re looking at right now … with the new administration vowing to cut back on environmental regulation and enforcement.”

Perhaps the SELC’s biggest win has come with its ground-breaking litigation and the public awareness that is coming with revelations about the threats posed by leaking coal ash disposal ponds or lagoons throughout the Southeast.

Middleton set up shop in Chapel Hill, North Carolina to help tackle those challenges. With O’Day’s help, they hired Frank Holleman, a private attorney in Greenville, South Carolina, in 2011 to dive into emerging developments there.

Holleman got to work quickly bringing enforcement actions against South Carolina Electric & Gas and Santee Cooper, a wholesale power cooperative. Even though several years had passed since a massive 2008 coal ash spill in Tennessee, the SELC’s action represented the first proactive maneuver to deal with coal ash and not leave it to utilities and their consultants to manage out of the public eye.

“We thought we might have an opportunity to have an impact on by enforcing the law at one or two sites,” Holleman said. Things developed entirely differently because once we started looking at it, we discovered the problem throughout our region.”

Enforcement actions in South Carolina, which South Carolina Electric & Gas and Santee Cooper signed on to, ended up serving as a model of sorts for what Holleman and his growing team of lawyers would seek in other states: mainly to move the ash out of unprotected pits and into lined landfills away from waterways. Alternatively, the ash could be sold as raw material to concrete makers.

“In both instances, we were able to settle with the utilities,” Holleman said. They agreed not only to excavate the particular sites but they also adopted a corporate-wide policy of excavating every site in their system.”

But the collaborative model didn’t stand up against Duke Energy in North Carolina, which had a much larger ash liability on its hands than utilities in South Carolina.

“We ran into a hornet’s nest of opposition,” Holleman said. “Duke and regulators were joined at the hip. As soon as they tried enforcing the law, Duke’s lobbyists met with the state agency and they were determined to do in citizen law enforcement against Duke’s coal ash.”

Paige Sheehan, who handles media queries about Duke Energy’s coal ash, challenged SELC for “asking courts to overrule technical expertise at the state and EPA and order the most extreme closure option which may do more harm to the environment than good.”

Sheehan also takes issue with SELC’s actions seemingly regardless of the dollar cost of excavating ash from ponds versus capping them in place. “Based on TVA’s review of their sites, excavation is generally two to 10 times more expensive,” she said.

Holleman said despite the pushback, the work so far has elevated the issue – along with a 2014 spill of toxic wastewater from a Duke Energy ash site along the Dan River.

“We’ve gone from a situation where the public and the utilities were largely unaware of the damage these lagoons were doing in their communities and the risks became widely known,” Holleman said.

“Utility executives are willingly, or unwillingly, facing up to those risks by moving beyond this primitive process and move it away from waterways, out of groundwater, and storing it safely in dry-lined landfills or recycled for concrete,” he added.

Frank Rambo, who heads SELC’s teams of 20 energy attorneys, explained a key tenet of its success over its first 30-plus years this way:

“There is still a bedrock of feeling and belief that SELC was founded on that holds true, that if policies are going to endanger clean drinking water, places to fish; if they’re going to try to change that, they’re going to get a lot of resistance,” Rambo added.

Katie Ottenweller, who heads SELC’s solar energy advocacy, says the legacy Middleton is building is unique not just for the impact of its achievements in courts and before utility commissions, but also as an exciting and challenging place to work.

The moment everything “clicked” for Ottenweller is when in developing testimonials about solar’s benefits from a wide variety of southerners, she found Chuck Jay, a former coal miner in Alabama-turned solar owner and installer who has built about 40 residential rooftop systems and three large solar farms for clients since 2009.

“It’s not like he’s against coal, for his community,” Ottenweller said. “It made me really see the impact our work can have on folks regardless of what news channel they watch or what side of the political aisle they are on.”

Looking back and into the future of SELC, Cale Jaffe, a former staff attorney and now Director of the University of Virginia’s Environmental and Regulatory Law Clinic, said Middleton focused on building a sustaining organization that will live beyond his time. “He is a keen strategic thinker and recognizes the care and planning to be effective … where the rubber meets the road.”