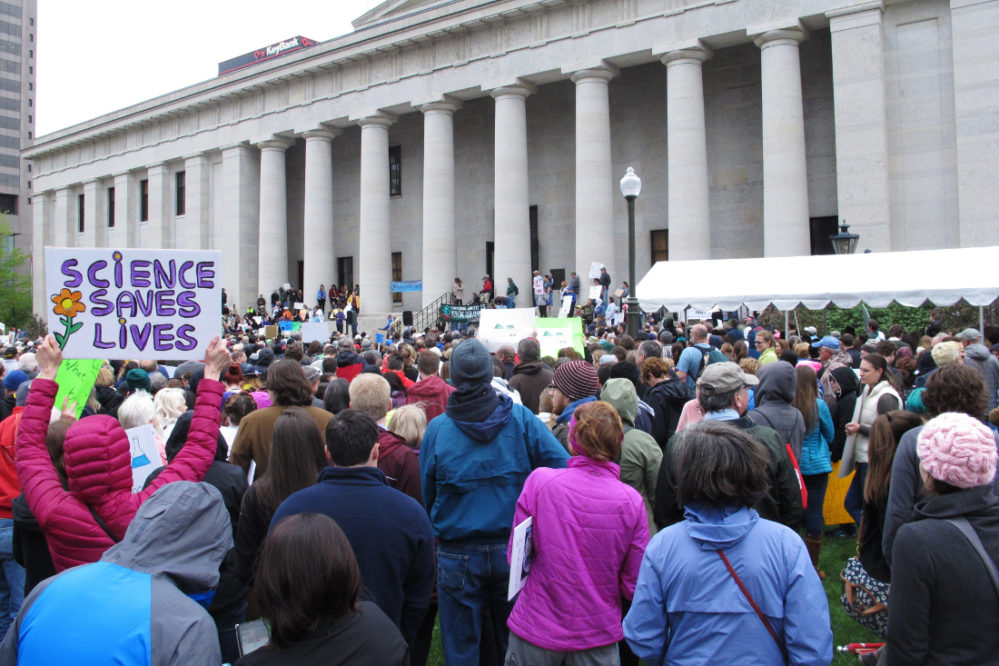 Hundreds of people gather at the Ohio Statehouse to defend science research at a time advocates say attacks on the validity of science are mounting, on Saturday, April 22, 2017, in Columbus, Ohio.

As pro-science demonstrations continue this weekend in Washington D.C., advocates want to emphasize that the issue is not just academic.

Last weekend’s March for Science called for energy policies based on sound science and evidence, opposed proposed cuts in federal funding for research and technology, and supported continuing access to the widest possible talent pool through policies that promote diversity and open borders. Those issues directly affect Ohio, advocates stressed.

The science-themed Earth Day rallies and marches took place April 22 in Washington, Chicago, Cleveland, Columbus and about 600 other cities across the United States and around the world. While based on a broad, general agenda, signs reflected many people’s concerns about climate change, health and the environment.

People from Ohio and around the county will also be participating in the People’s Climate March on Saturday.

“I strongly support the marches for science…around the country,” said chemistry professor Robert Thompson of Oberlin College. “The issue of energy arises in relationship to climate science and research into renewables.”

Thompson participated as an individual because Oberlin College, like Ohio State University and some other institutions, did not take a formal position. Other colleges and universities did expressly support the event, including Cleveland State University and Ursuline College in Pepper Pike.

Among other things, members of Donald Trump’s administration have rejected mainstream science on climate change and moved to roll back substantive rules aimed at reducing pollution from power plants, mining and other sources.

Trump’s budget proposal aims to cut funding for the Department of Energy’s Office of Science by 18 percent and the Environmental Protection Agency by 31 percent. The National Institutes of Health would also suffer deep budget cuts, along with the National Oceanic and Atmospheric Administration’s Sea Grant Program.

“Continued support and funding are crucial to work toward a sustainable present and future,” Thompson said.

“Federal funding is very important to Ohio’s success in the fuel cell industry, especially with respect to research and development at the university level,” said Pat Valente, executive director of the Ohio Fuel Cell Coalition. “This funding also provides for opportunities for academic and private business partnerships to advance the industry, which have been very successful.”

Examples include an LG Fuel Cell Systems job training program at Stark State College in North Canton and research at the University of Akron, Kent State University and The Ohio State University. Research at Ohio State and federal funding from the Department of Defense also helped get a new high-velocity metal forming facility built and running in Lima. The facility cuts tooling design time by up to 88 percent at ten percent of previous tooling costs and just one percent of traditional stamping costs, Valente noted.

Thanks to a Department of Energy grant, the Ohio Fuel Cell Coalition also functions as one of four regional technical exchange centers to collect nationwide data on fuel cell integrators, suppliers, components and systems.

“We need to start piloting these [technology innovations] and get these out so Congress can see all the benefits from all the R&D dollars that are invested, so that we can reduce the costs of electricity,” Conrad said as he spoke about his group’s work on March 31.

“Given the various research institutions in Ohio, as well as agencies such as NASA Glenn and the Wright Patterson Air Force Base, federal support for science and technology within the energy field has been significant,” said Alexis Abramson, director of the Great Lakes Energy Institute at Case Western Reserve University in Cleveland. “Such funding is driving clean energy development, leading to the commercialization of technologies, and creating jobs.”

Over the past eight years, federal funding provided roughly $60 million for the Great Lakes Energy Institute’s faculty, students and partners. Projects have included an iron-based flow battery for energy storage, work on solar energy, work on virtual energy audits for buildings, improving energy efficiency for titanium production, and a building-to-grid program to maximize renewable energy use and boost grid stability. “I could go on!” Abramson said.

Basic science is “important to keep that technology pipeline going” for medicine, energy and a host of other fields, said American Association for the Advancement of Science President Barbara Schaal at that organization’s annual meeting in February. Schaal also advocated strongly for immigration rules that continue to foster international cooperation.

“The ability to access scientists and engineers from other countries is very important,” Valente said, noting that U.S.-born students aren’t choosing science, technology, engineering and mathematics (STEM) fields at the same rate as students abroad. “At The Ohio State University, approximately 40 percent of graduate and Ph.D. level students in these programs are international students,” he observed.

EPA funding cuts also raise concerns. “Funding of the EPA and its outreach to our region is critical for the health of the water, soil, air, flora, fauna, and people of the Great Lakes and the Great Lakes basin,” Thompson said. “I am frightened to hear about the threats of closing of EPA offices and removing funding for pure water resources. Science provides the measures of the extent of pollution and provides the solutions to identified problems.”

Proposed cuts could also hamper the Ohio Environmental Protection Agency. Ohio EPA has responsibility for running a variety of federal and state environmental programs and gets roughly one-fifth of its funds from the federal government.

Rescission and reconsideration of science-based rules by the Trump administration present additional worries. Those regulations include the Clean Power Plan, a streamwater protection rule to guard against damage from coal mining and other rules adopted during the Obama administration.

Within the ten days leading up to the March for Science, Trump and Scott Pruitt’s EPA also announced its intent to reconsider rules dealing with mercury emissions and wastewater discharges from power plants.

Environmental advocates have also objected to versions of the so-called HONEST Act and EPA Science Advisory Board Reform Act.

“Both bills/riders impact the process by which the EPA would be able to obtain scientific information and use it to protect Ohioans from pollution,” explained Yogin Kothari at the Union for Concerned Scientists. “A rider similar to the HONEST Act would make it harder for EPA to use the best available science to protect Ohioans from public health and environmental risks, including things such as lead in drinking water…. The EPA Science Advisory Board Reform Act would make it more difficult for experts (say from Ohio’s great universities) to serve on the scientific panel if they receive any grants from the EPA.”

Climate change was also a core theme at last weekend’s March for Science, with protesters holding signs such as “There is no Planet B” and “The oceans are rising, and so are we.”

“We hope this march will trigger investment into science programs and studies that will help further environmental endeavors,” said David Miller at the Ohio Environmental Council.  “We feel these marches are a crucial way for folks to get involved in advocacy for issues that they care about.”