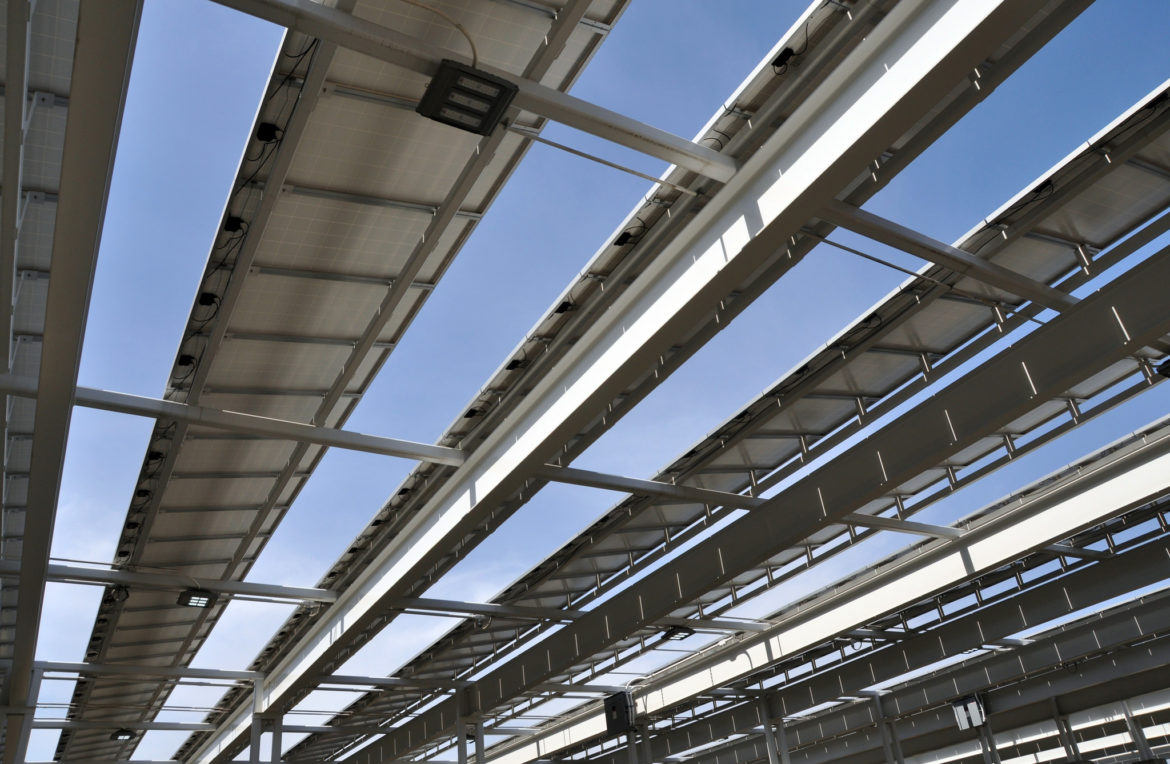 Solar panels above a parking lot in Raleigh.

A bill in the North Carolina legislature backed by Duke Energy could slow the state’s solar boom to a crawl, advocates warn.

As Duke has urged for months, House Bill 909 would drive nearly all future independent clean energy projects out from under the federal Public Utilities Regulatory Policies Act (PURPA), and into a bidding process the utility manages, with a ceiling of 400 megawatts for each of the next five years, and no floor.

Without the legislation, the industry predicts it could build upwards of 1,500 megawatts of independent renewable projects each year, mostly solar, over the same period.

Only biogas captured from hog waste is spared from the bill’s cuts.

“This bill would crush renewables in every sense, except perhaps in agriculture,” said Chris Carmody, the executive director of the North Carolina Clean Energy Business Alliance, a trade association. “[It] would allow Duke to eliminate all competition.”

The proposal comes as the utility wages a high-profile, high-stakes battle over the cost and length of contracts it must sign with small renewable energy projects – a fight whose outcome experts say will determine the future of solar power in the state.

Rep. Dean Arp (R-Union) offered his bill in part because negotiations between Duke, solar companies, clean energy advocates and other stakeholders over PURPA and other policies have ground to a virtual halt.

“Everybody’s been frustrated by the stagnation of the process. What’s not acceptable is no action,” Arp said.

But many involved in the stalled talks – conducted at the behest of House Republican leaders – blame Duke for the impasse, heightening dismay at what many lobbyists dubbed “the Duke bill.”

“In February we were very near to an agreement to support a [competitive bidding] process,” said Carmody. “Literally in the eleventh hour, Duke withdrew its offer from the table.”

Duke spokesman Randy Wheeless objected to House Bill 909 being called the “Duke bill,” but acknowledged his company supported it. “These PURPA fixes are our number one issue,” he said.

House leaders have assigned the measure to three different committees, a move veterans of the legislative process say is a death knell. But critics view the bill as a troubling sign in the standoff between Duke and solar developers. And they say it’s just the latest move by the utility to retain control in an increasingly competitive clean energy landscape.

A once-obscure law at center of dispute

Much of that competition has been enabled by PURPA, the once-obscure federal law whose implementation in North Carolina is at the heart of the dispute between Duke and the solar industry.

The company is quick to note that 60 percent of all the renewable projects nationwide facilitated by PURPA are in North Carolina, a figure it suggests is problematic. Clean energy advocates, however, say the statistic simply reflects the policy’s intent: to spur solar and other clean energy sources in a regulated market.

“North Carolina has implemented PURPA in a reasonable way,” said Steve Levitas, counsel for Cypress Creek Renewables, one of the nation’s largest solar developers. “Other states have utilized other policy mechanisms to promote renewables development.”

The 1978 law requires publicly-regulated utilities to purchase power from small independent producers at the same rate it would expend to produce the electricity itself – a figure called “avoided cost.”

For decades, electricity produced from renewable sources was much costlier than that from fossil fuels. Even with PURPA, a small solar project in North Carolina simply couldn’t turn a profit at the avoided cost rate.

But that calculus has been upended in recent years, as the cost of solar has plummeted thanks to technological advances, tax incentives, and other policies that have helped expand the market.

In North Carolina, the “standard offer” required under PURPA applies to any renewable energy project of five megawatts or less, which is entitled to a 15-year contract at the avoided cost rate.

Like getting pre-approved for a long-term, fixed-interest-rate mortgage before shopping for a new house, the standard offer gives developers certainty as they navigate other variables. It also gives them crucial leverage with their only potential customer.

“The importance of the standard offer contract is not to protect the utility,” said John Wilson with the Southern Alliance for Clean Energy. “It’s to protect the seller of the product from a utility that doesn’t negotiate in good faith.”

PURPA’s terms in North Carolina have aided sustained growth in small solar projects, which proponents say have brought jobs and tax dollars to many rural areas of the state that need it most.

“Without having those policies in place,” said Lauren Bowen, attorney with the Southern Environmental Law Center, “it’s unlikely we’d have anywhere near the amount of investment in clean renewable power that we’ve seen in North Carolina.”

Duke calls this investment “haphazard,” straining reliability of the electric grid. It sees a “gold rush” by solar companies it claims are overcharging ratepayers.

Citing this logic, Duke has acted unilaterally to limit new PURPA projects in the last year, steps solar developers have challenged as illegal. Last summer the company stopped connecting most small PURPA-facilitated solar projects to the grid; many remain in limbo. It began agreeing to only five-year contracts for larger renewable projects, a chilling signal to investors.

Meanwhile, the company wants the North Carolina Utilities Commission to loosen PURPA’s terms in the state — shrinking the size of facilities that can qualify for a standard offer to one megawatt, reducing the length of the standard contract, and cutting the avoided cost rate from about 5.5 cents per kilowatt hour to 3.5 cents.

The PURPA revisions represented in House Bill 909 are more extreme. Only the smallest possible projects, 100 kilowatts in size, could qualify for a standard offer, and the length of the standard contract would be “up to” 10 years.

“What Duke is trying to do is not reform PURPA in a way that takes us forward, but reconstruct it as a barrier to participation in energy generation by independent companies,” said Wilson, of the Southern Alliance for Clean Energy.

Like many solar developers, Hollister has some empathy with the localized difficulties Duke may face as more clean energy projects are added to the grid.

“Duke has done an amazing job of managing the grid in North Carolina. They do a fabulous job in that,” he said. As for maintaining that performance: “I don’t want to imply that there aren’t some challenges out there.”

But on balance, solar remains a miniscule portion of Duke’s overall mix. And a study commissioned by Duke itself shows the state is far from producing enough renewable energy to require large scale upgrades to the grid.

That’s why advocates say the solution is more nuanced than the one Duke has proposed.

“They’re taking a sledgehammer approach when they should be taking a scalpel approach,” said Peter Ledford, regulatory counsel at the North Carolina Sustainable Energy Association. “There are a lot of ways to handle this issue, short of trying to shut down the market for [independent power producers].”

And though solar developers reject the implication they’re fleecing ratepayers, they’re eager to work out a competitive bidding process with Duke they view as fair and transparent, which could bring costs down further.

“We’re very open to Duke’s suggestion that moving to a competitive solicitation regime would be good for future solar development, and [good] for Duke as an operator of the grid,” said Cypress Creek’s Levitas.

“Duke is our only partner within their service territory, which covers much of the state,” said Carson Harkrader, the director of project development at Durham-based Carolina Solar Energy. “We want things to be worked out with them.”

But, according to Harkrader and many others, a competitive bidding process can only work if North Carolina retains meaningful PURPA rules. “PURPA is needed because we have a regulated monopoly,” she said.

Despite House Bill 909, advocates say a “narrow window” remains open for achieving legislation most everyone can support.

If no new law is passed, the Utilities Commission – which recently held four days of hearings extensively reported in the Charlotte Business Journal – could resolve many points of contention around the end of June.

But for Sundance’s Hollister, the policy discussions ultimately need to rise above PURPA’s minute details.

“It is in our best interest to make sure we implement solar as quickly and as rapidly as we can as a society. It’s going to create a more stable, less expensive future, with less risk,” said Hollister.

“Until we start acknowledging all the benefits that come from this technology, and start accounting for all the negatives that come from the dirty fuels industry, we are not going to be able to overcome this problem. We have to change the conversation.”