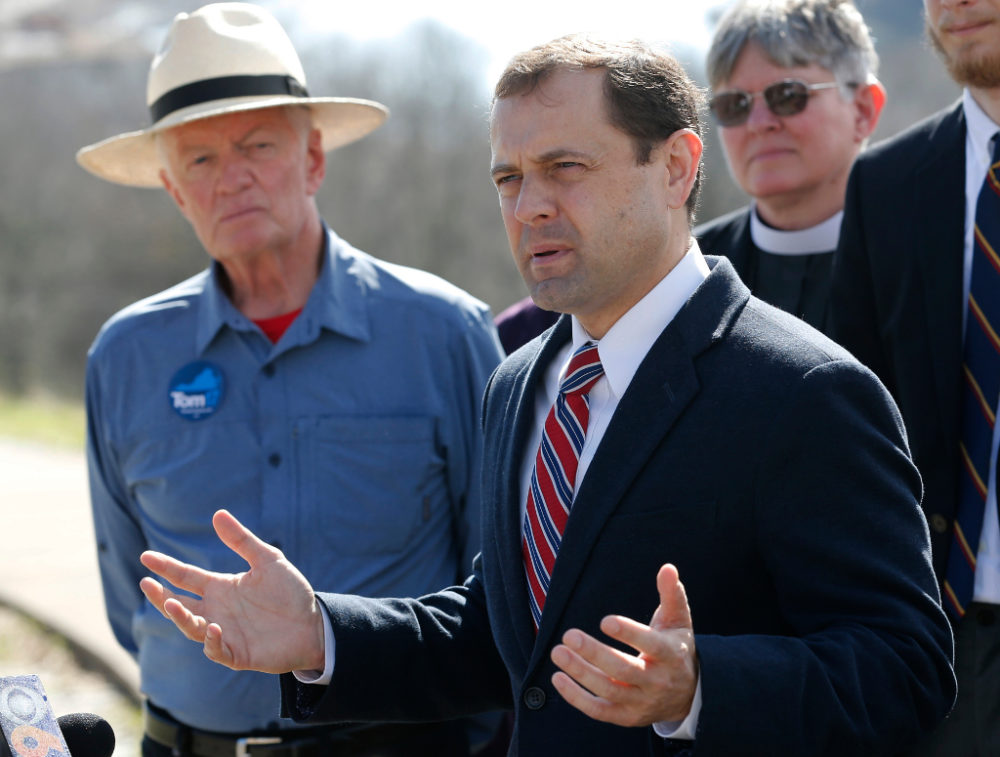 Democratic candidate for governor of Virginia, former congressman Tom Perriello, has made the Atlantic Coast Pipeline a central issue in the campaign. (AP Photo/Steve Helber)

Opponents contesting the Atlantic Coast Pipeline’s proposed route through Virginia are rolling out fresh arguments against the controversial projects which are becoming flashpoints dividing Democratic candidates running for governor there.

The next administration, which would serve from 2018 through 2021, may have the state’s final say in whether the pipeline is built. Current Gov. Terry McAuliffe backs the pipeline, as does Lt. Gov. Ralph Northam, who is running for governor.

If new challenges directed to Dominion and state regulators from the non-profit Dominion Pipeline Monitoring Coalition and Northam’s opponent, former U.S. House Rep. Tom Perriello, are not answered to their satisfaction, the coalition says it will go to state court and possibly federal court to block further consideration of the pipeline.

“We are working with multiple public-interest law firms, and will certainly mount legal challenges,” said Rick Webb, Executive Director of the coalition.

The Federal Energy Regulatory Commission is expected to issue its final Environmental Impact Statement in June.

The coalition’s success may hinge in part on whether Perriello, who has been a vocal opponent of pipeline projects, prevails in the June 13 primary against Northam. He is also pushing other candidates in 2017 and 2018 to refuse, as he has, contributions from Dominion Energy – the Atlantic Coast pipeline’s developer – and its sister utility, Dominion Virginia Power.

Perriello says Virginia is “the product of a regulatory environment that has failed to adapt to a new energy economy and that actively discourages new investments in renewables like solar and wind. We have to do better.”

“That’s why I oppose,” Perriello says, “the construction of the Atlantic Coast and Mountain Valley pipelines, which would bind Virginia to an unsustainable and environmentally costly energy source while infringing on the land and heritage of thousands of Virginians.”

Northam had been quiet on the proposed pipelines until a debate Saturday night. Perriello asked if Northam had any conversations with Dominion over stepped-up reviews of water quality risks along the pipeline’s proposed route. Northam disclosed he issued a letter in April stating his support for site-specific reviews rather than a blanket review process.

“I’ve had a lot of different discussions with a lot of different people,” Northam said. “I’m not going stand here on the witness stand and respond to what those discussions entailed. I have had a working with relationship (with Dominion) …. We want the pipeline to be built with science and transparency. Also we need new jobs in the commonwealth of Virginia. It’s not a yes or no, or us versus them. We all sit down at the table and discuss.”

Ed Gillespie, the leading candidate for the GOP nomination,, said he “will work with the Trump Administration and our Republican majorities in Congress to expand the production of safe, reliable and affordable energy in the Commonwealth.”

‘A lot of risks that haven’t been addressed’

The claims and questions about the ACP raised by the pipeline coalition and its allies, which neither Dominion nor the state’s Department of Environmental Quality (DEQ) have commented on, include:

The DEQ has acknowledged some of the shortcomings and has agreed to hold a fresh round of public hearings alongside the site-specific reviews, which Dominion has agreed to. But it remains to be seen how DEQ’s technical expertise may be acted on or effectively overridden by Gov. McAuliffe or his successor.

“There are a lot of risks that haven’t been addressed,” said David Sligh, an attorney and consultant to the Dominion Pipeline Monitoring Coalition, who has worked in and out of state agencies on water quality and pipeline permitting issues for 35 years.

“Specifically the analyses done about Karst terrain underlying the limestone and other porous materials that are easily dissolved, and large caves and crevasses that water can move through quickly, are ridiculously inadequate,” Sligh said. “There is great potential for contamination and problems … beginning with digging and blasting the size of a trench.”

Webb claims “FERC is clearly not in compliance with NEPA, having issued a DEIS (Draft Environmental Impact Statement) that relies on future analyses (emphasis added) of significant problems and future development of mitigation strategies.”

Also, the Chesapeake Climate Action Network (CCAN) held a press conference April 27 in coordination with the coalition and the Allegheny-Blue Ridge Alliance, Friends of Nelson and Appalachian Mountain Advocates, claiming their new research of the Draft Environmental Impact Statement by FERC and Dominion’s filings at FERC raises fresh questions about how it will clear the way for the pipeline in Virginia’s Blue Ridge and Appalachian mountains and what it will do with the excess soil and rock.

CCAN said Dominion would require several mountaintops in heavily forested areas to be “reduced” by 10 to 60 feet along the proposed route of the pipeline. “Furthermore, Dominion has yet to reveal how it intends to dispose of at least 247,000 dump-truck-loads of excess rock and soil—known as “overburden”—that would accumulate from the construction along just these 38 miles of ridgetops.”

Dominion spokesman Aaron Ruby pushed back against the assertion that the project would require “mountaintop removal,” a term usually applied to strip mining for coal and other minerals.

“These groups have grossly exaggerated what our construction activity is going to look like on ridgetops,” Ruby told the Richmond Times-Dispatch. “They deliberately use loaded terms like ‘mountaintop removal’ to mislead the public about what we’re doing.”

While FERC is widely assumed to have the final permitting authority on interstate pipelines, Sligh said the state could still block the projects.

At least three states have rejected, or blocked development of, interstate pipeline projects by ensuring enforcement under the Clean Water Act:

Slight said FERC’s role “in no way lessens the state’s ability to stop these destructive projects if they would damage our water quality. Congress explicitly gave states a veto power over federal projects that could degrade their waters.”