Photo By
Business Alliance to Protect the Atlantic Coast 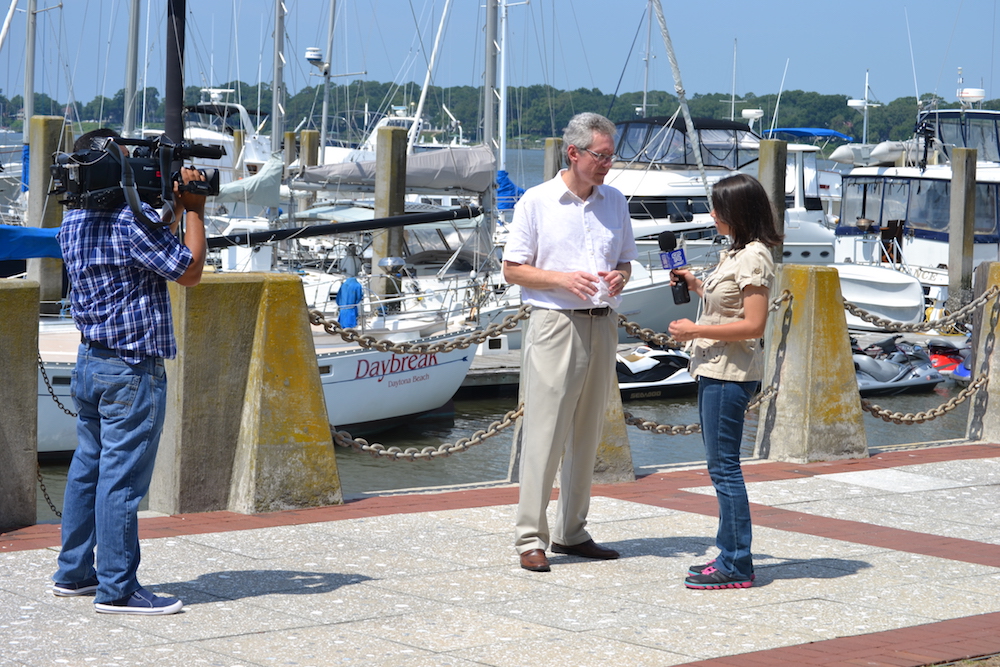 Frank Knapp (center), head of the Business Alliance for Protecting the Atlantic Coast, talks with a reporter in Beaufort, South Carolina.

Commercial fisheries, vacation rental companies and other coastal businesses were hardly shocked last week when President Trump issued his executive order to begin opening the Atlantic Ocean to oil and gas drilling. In fact, they say the president may be the one who’s now a bit surprised.

“We did expect it,” said Frank Knapp, who heads the Business Alliance for Protecting the Atlantic Coast, representing businesses from Maine to Florida. “But I don’t know that the Trump administration expected to have this much violent pushback. They have lit the candle, and for people along the coast, businesses along the coast, the local governments along the coast, it’s game on.”

Business voices — along with coastal communities, conservation organizations and the military — helped convince the Obama administration to keep the south Atlantic Ocean out of the current oil and gas leasing plan, which ends in 2022.

Trump’s order is the first step in redoing that plan, directing Interior Secretary Ryan Zinke “to give full consideration of revising the schedule” of oil and gas leases in the Gulf of Mexico, the Arctic Ocean, and an area of the Atlantic Ocean stretching from Delaware to Florida’s Cocoa Beach.

But the order isn’t limited to these specified areas, raising alarm bells for drilling foes from California to Maine to Miami. And it tells Zinke to “expedite” permitting for seismic testing, the oil exploration technique that uses loud blasts of sound that can harm marine life.

Southeast Energy News spoke with Knapp about his concerns with Trump’s order and why he has “a glimmer of hope” in his fight against it.

Knapp: Well, let’s take [those claims] one at a time. Would drilling for oil and industrializing part of the East Coast create jobs? Sure, it would. But they would be offset by losses of tens of thousands of jobs. We have 1.4 million jobs along the coast directly related to a healthy ocean, in tourism, recreation, commercial fishing. Nobody wants to be industrialized. That’s why you have over 120 municipalities up and down the Atlantic Coast opposing offshore drilling and seismic testing.

[As for energy independence], the big fear is the Middle East. This is 2012 data, but less than 5 percent of our imported oil comes from Middle Eastern countries other than [U.S. ally] Saudi Arabia. So, the argument that we have to be independent from our enemies? We already are.

[On environmental safety]: We should not be telling the Atlantic Coast a spill “is not going to happen.” It happens all the time. It’s inherent in the process. A report out just last week said there are still nine spills happening in the Gulf every week. There’s no technology that can make it 100 percent safe.

It looks like the order could result in drilling in the South Atlantic, not far from Mar-a-Lago.

You really have to scratch your head. Does President Trump want oil washing up on the beaches of Mar-a-Lago? Really? But because they did put [the South Atlantic] in there, that’s why we have the Miami Beach Chamber of Commerce, that’s why we’re going to go after every chamber of commerce on the Florida Atlantic Coast. There is going to be one, giant unified business voice from Maine to Key West opposing this.

Why do you all care about expedited permitting for seismic testing?

Seismic testing is almost as bad as drilling. It is a hideous, old technology that blasts extremely loud sounds down toward the bottom of the ocean. It has been documented that it will reduce catches of commercial fishermen by over 40 percent. It is documented to harm marine mammals. Seismic testing will damage the economy of the Atlantic Coast. We should not make it easier to do.

The Obama administration in January denied six seismic testing permits [for the mid and southern Atlantic]. There is a process that the Bureau of Ocean and Energy Management goes through. That process should stay the same as it always has been.

In fact, [we’ve applied] to intervene in the appeals that those seismic testing companies have made. Our supporters would be directly economically impacted by seismic testing, especially the commercial fishing folk. We strongly believe we have standing to intervene to support the January 6 denial of those permits.

What other plans do you have moving forward?

The Business Alliance for Protecting the Atlantic Coast is growing in numbers. With the addition of the Miami Beach Chamber of Commerce last week, we’re now over 41,000 small businesses, and over 500,000 commercial fishing families. We’re continuing to build on that. We’re going to go to Washington to meet with [the administration], as we have done before, and we will be bringing more business voices there to argue that this is not what anybody on the Atlantic coast wants.

Is there any reason to believe Secretary Zinke or someone else in the administration might be sympathetic to your arguments?

Secretary Zinke has made two comments that offer a glimmer of hope. Back in March, he [said], “I approach this job in the same way that Boy Scouts taught me so long ago: ‘leave the campsite in better condition than I found it.’” By simply not allowing offshore drilling or seismic testing [on the Atlantic Coast], he can achieve that Boy Scouts motto.

The second thing he said, just last week: “There’s no set goal, but if there’s areas that are acceptable, that have resources, and local communities are for it and states are for it we could include it in next five-year plan.”

There’s another glimmer of hope. No community on the Atlantic coast wants it. Most states don’t want it, the elected officials along the coast, for the most part, don’t want it. Certainly the [coastal] towns and cities have all voted against it. The business community is rising up against it.

So, if Secretary Zinke allows the professionals to go through the process, to do their job as they did last time, to look at the same criteria they looked at last year, they will arrive at the same conclusion: no drilling in the Atlantic.

President Trump’s order has drawn opposition across the political spectrum. Is that also cause for hope?

Of course, it is. These communities that are along the coast, most of them are nonpartisan elections, [but they are] very red areas. This is not partisan at all. These are people and elected officials who do not want to destroy the Atlantic Coast economy and the way of life. They are not despondent. They’re going to fight like hell to keep the Atlantic Coast that we know today for generations and generations to come.

Correction: An earlier version of this story incorrectly identified the name of the business advocacy group. It is the Business Alliance for Protecting the Atlantic Coast.