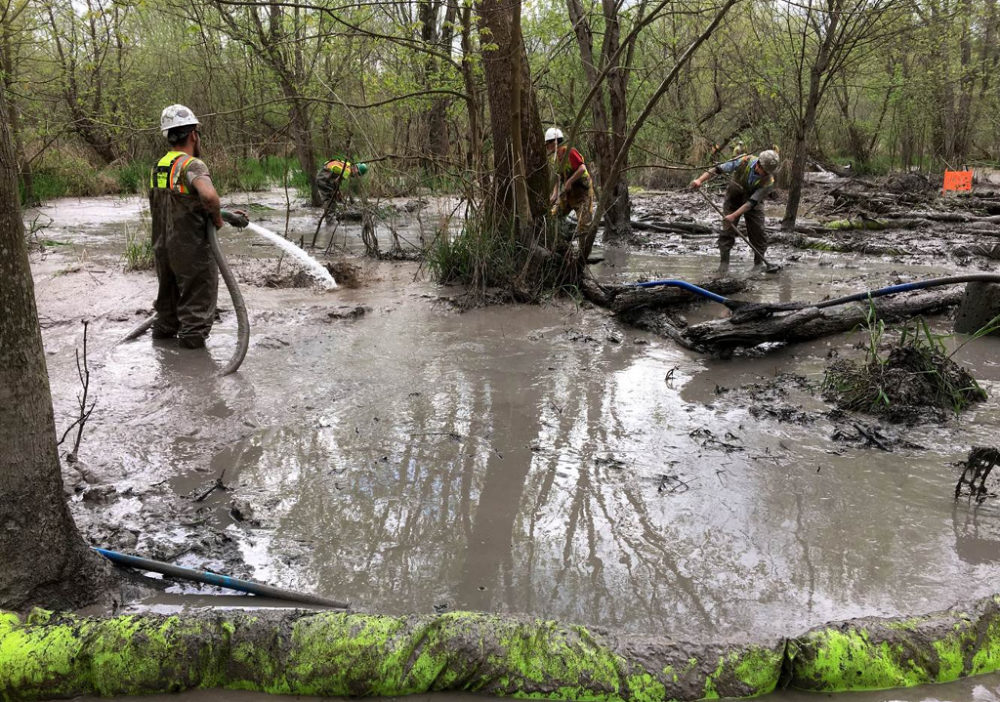 This image distributed by the Ohio EPA shows the site of an April incident involving the Rover Pipeline.

Releases of more than two million gallons of drilling mud triggered federal and state agency actions against the developer of Ohio’s Rover Pipeline this month, and advocates suggest those incidents may be part of a bigger problem in the rush to develop Ohio’s shale oil and gas.

“I suspect this is just the tip of the iceberg,” said Ted Auch at FracTracker Alliance, with many other problems, he and others suspect, going undetected. “How many little spills are there?”

In April, construction activities for the Rover Pipeline led to “inadvertent” releases of a total of more than two million gallons of drilling fluid at and near Ohio rivers and wetlands. Now a May 5 enforcement letter from the Ohio Environmental Protection Agency seeks $431,000 and other actions from Texas-based Energy Transfer Partners for alleged violations of Ohio laws.

“We are significant proponents of shale oil and gas development in Ohio… but the governor would say you have to do it right,” said Ohio Environmental Protection Agency Director Craig Butler. Enforcing the state’s environmental laws in this case is “important to Ohio. It’s important for water quality, drinking water quality, and just the quality of life for Ohio.”

On May 10, the Federal Energy Regulatory Commission told Energy Transfer Partners to add more environmental review and delay construction at several spots where work has not yet begun.

‘A significant pattern of violations’

Horizontal directional drilling uses water, clay and other materials to help push metal pipe through the earth. “When they’re doing directional drilling, obviously you have to lubricate for this large diameter pipe,” explained Jimmy Stewart, president of the Ohio Gas Association.

Usually drilling mud comes back up and the driller logs its return. For nearly three weeks, however, Rover Pipeline logs showed some returns were absent or intermittent, according to FERC’s May 10 letter. In April drilling mud leaked into wetlands in six counties, Ohio EPA’s proposed order said.

“Due to the subsurface conditions and other environmental conditions of the locations, the drilling mud was able to migrate through naturally occurring fractures in the soils and reach the surface,” said Energy Transfer Partners spokesperson Alexis Daniel.

The largest release of approximately two million gallons covered roughly 500,000 square feet of a sensitive Ohio wetland near the Tuscarawas River in Stark County. Estimated volumes for other releases ranged from 200 gallons to 50,000 gallons. All discharges are described as “inadvertent.” Storm water violations and an open burning violation are also alleged by Ohio EPA.

Although inadvertent releases and other violations happen with other projects from time to time, “we don’t see patterns like this,” Butler said. “This is a significant pattern of violations of various water quality issues.”

On Wednesday, FERC followed up with its own action. Until certain requirements are met, the company should delay construction at eight spots where horizontal directional drilling work has not yet begun, FERC’s letter said. Those locations are near the Ohio River, Portage River, Captina Creek and Middle Island Creek.

FERC also wants Energy Transfer Partners to have a third-party contractor review all actions throughout the drill effort in the Tuscarawas River area “and ending with the development and initiation of the plan for restoring the wetland,” the agency’s letter said.

“We take these releases seriously,” said Daniel. But, she stressed, the drilling mud used in the Rover Pipeline project “is a mixture of naturally occurring bentonite clay and water and is safe for the environment.”

Stewart concurred. “I mean, really?” Stewart said. “If this stuff is as toxic as they say, why is it used to line people’s fishing ponds?”

“Bentonite is also commonly used in a variety of household products that we use every day, such as beer and wine, sugar, honey, creams and lotions, baby powders, laundry detergents and hand soaps,” Daniel said. “Specifically, it is also used in the salt mixture that states such as Ohio use on their roads in the winter to melt ice.”

Releases of drilling mud are “not an unusual occurrence” for directional drilling of pipelines, Daniels said. “We do not believe that there will be an impact to the environment,” she added.

“This is absolutely not routine,” Butler countered. And despite the company’s comparison to benign household products, the releases cause harm, he said.

The Tuscarawas River wetland in Stark County, for example, is among the highest functioning wetland areas of Ohio, he noted. Letting millions of gallons of drilling mud into that kind of environment “has a pretty catastrophic effect,” Butler said. “It will smother the plant life, as well as any other life” in that area.

“The clay in effect smothers plant and animal life in the wetland,” agreed Cheryl Johncox of the Sierra Club. “This is a critical time for our wetlands since plants are emerging for the year, and it is during amphibian and other wildlife breeding cycles.”

“Too much of anything in one spot can be a problem, obviously,” Stewart conceded. “But they’re cleaning it up.”

Yet using high-pressure water, vacuum hoses and scrubbers is also “extremely destructive to sensitive wetland areas,” Johncox noted. And it’s not the end of the story.

“What you have is a massive cleanup and a very long, very expensive restoration that will have to take place.” Butler said.

The actions by Energy Transfer Partners were “all permitted activity by FERC,” Daniel stressed. “We are not out of compliance with any of our permits.”

That doesn’t deprive Ohio EPA of its enforcement authority or excuse Energy Transfer Partners’ actions, Johncox said. “They’re basically just thumbing their noses at the state of Ohio and our environmental protection agency,” she said.

Butler dismissed any challenge to Ohio EPA’s jurisdiction. The agency has full authority to enforce state and federal laws dealing with water and air pollution in Ohio, he said.

“FERC tells us that we’ve got all the authority we need to hold them accountable,” Butler said.

“From its onset, the Rover Pipeline project has been a disaster for Ohio’s fragile wetland ecosystems,” said Heather Taylor-Miesle of the Ohio Environmental Council. In her view, the company’s spills “demonstrate a lack of respect for both Ohio’s environment and the people who live here.”

‘Not just about the Rover Pipeline’

Haste could have contributed to the Rover Pipeline violations, Butler suggested. “We think it’s because they’re rushing so fast and so hard to get the pipeline into production that they’re cutting corners and not making sure that they’re complying with Ohio environmental law,” he said.

Wholesale prices for natural gas in Ohio are currently low, due to oversupply in the state’s Utica shale play. The Rover Pipeline and other projects aim to move natural gas into other markets, where it can command higher prices.

The flurry of activity could open the door to more problems and leave regulators “outgunned,” Auch said. “This is not just about the Rover Pipeline spills,” he stressed.

On May 2, the Ohio Environmental Council, Sierra Club and two other groups sued in federal court to block plans to allow drilling in parts of the Wayne National Forest in southeastern Ohio.

“The Wayne National Forest offers a critical habitat for many of Ohio’s rare, threatened or endangered species, such as the Indiana bat, bobcat, and eastern box turtle, among others,” said Nathan Johnson at the Ohio Environmental Council “Like all forests in Ohio, the Wayne is still quite young, and recovering from a legacy of over-exploitation…. Allowing large-scale fracking and the infrastructure required to support it would be a huge setback for the forest.”