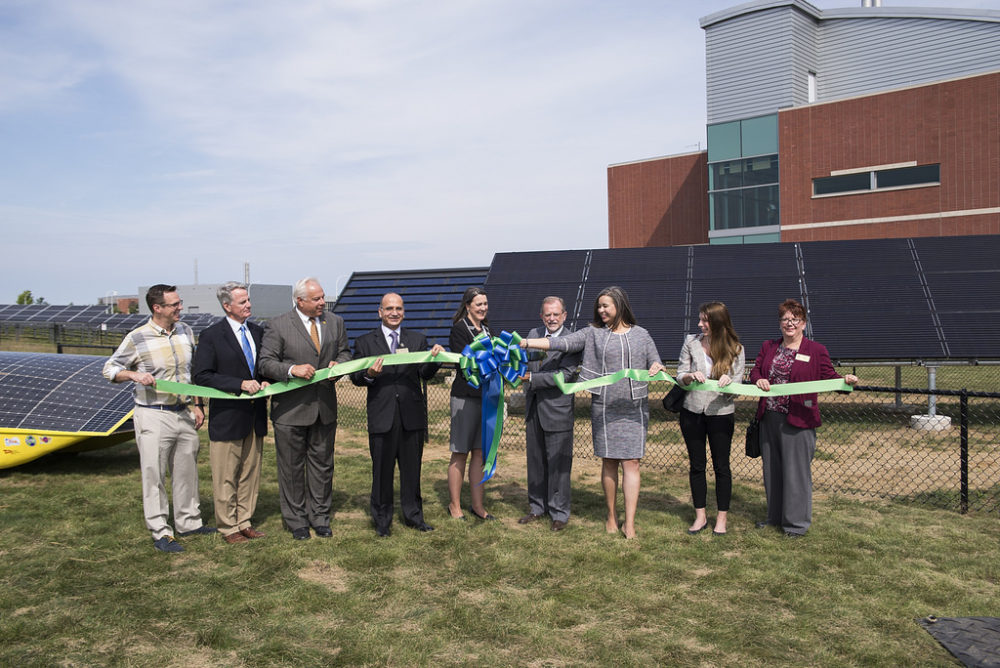 Dedication of a Consumers Energy solar project at Western Michigan University in 2016.

Michigan’s two largest utilities announced separate plans this week to increase their commitments to renewable energy based on the continued transition away from coal and in response to customer demand.

On Tuesday, DTE Energy committed to cutting carbon emissions 80 percent by 2050, which includes adding 6,000 megawatts of renewable energy from wind and solar. DTE plans to retire all of its coal power plants by roughly 2040, when 60 percent of its portfolio will come from wind, solar and nuclear. The utility plans to add 3,500 megawatts of natural gas generation in that time, rounding out the remaining 40 percent of its portfolio.

Taken together, the plans reflect a broader shift utilities are making toward clean energy based on economics and interest from their customers, said Dan Scripps, senior advisor with the Michigan Energy Innovation Business Council.

“It reflects where the industry is going with or without the Clean Power Plan,” Scripps said. “Utilities are making decisions by looking at what ratepayers want, what shareholders are seeking and what their largest (customers) are seeking and positioning themselves to respond.”

In a statement, DTE chairman and CEO Gerry Anderson said not only are the 2050 targets achievable, but also “affordable and reliable.”

Anderson also said the new targets align with what “scientists broadly have identified as necessary to help address climate change.”

“The transformation of the way we produce power is in full swing,” he said. “Like all big transformations, this one won’t happen overnight. It needs to be planned carefully and will entail big investments, but that can absolutely be done. We are committed to accomplishing this within the timeframe scientists have laid out, and in a way that works for Michigan’s economy, homeowners and businesses.”

“A public commitment to system-wide carbon reductions of this magnitude is significant,” Gwen Ruta, senior vice president of the Environmental Defense Fund’s Climate and Energy Program, said in a statement. “DTE Energy deserves credit for its leadership to move away from coal, and expand investment in renewable energy and energy efficiency.”

Chris Kolb, president of the Michigan Environmental Council, called it a “transformative plan.”

“We applaud DTE for shifting away from fossil fuels and leading the way toward a 21st century energy system in Michigan, and look forward to seeing this plan become a reality,” Kolb said.

“With the cost of natural gas and declining cost of renewables, it’s a good time to lay out a vision for the future,” Corbett said.

Meanwhile, Consumers Energy filed plans Friday with the Michigan Public Service Commission requesting approval of a three-year pilot program that allows customers with at least 1 megawatt of demand to contract for renewable energy.

In a conference call with reporters this week, a Consumers official said the program is in response to corporations’ demanding a greater supply of renewable energy generation — and that which comes from new projects, not by simply trading renewable energy credits.

“This will allow customers to have 100 percent renewable energy or any increment in between,” said Garrick Rochow, Consumers Energy’s senior vice president for distribution and customer operations. “These will be new green energy assets for the state, for our customers and to encourage economic development.”

According to filings with the MPSC, Consumers conducted a survey of its large customers based on the Corporate Renewable Energy Buyers’ Principals.

Consumers worked closely on the tariff with Switch Communications Group LLC, a Nevada-based company opening a data center near Grand Rapids that had said access to renewables was one of the requisites for locating here.

The “additionality” was “key in developing the tariff with Consumers Energy and to help support the construction of new renewable energy projects,” said Adam Kramer, Switch’s executive vice president of strategy. “Our relationship with Consumers serves as a model for how utilities can work with companies going forward.”

Under the proposed tariff, corporations would pay for their portion of the additional generation, with the rest borne by ratepayers.

Switch currently powers its operations through credits from existing wind energy projects. Once completed, Consumers’ expanded Cross Winds Energy Park will supply the data center, though both companies declined to say how much energy would be needed. Future phases of the Cross Winds project call for 44 megawatts by the end of 2017 and potentially 76 more megawatts by 2020.

Rochow said 20 to 30 large-scale companies in Michigan have expressed interest in participating in the program, and “we expect additional interest going forward.”

Scripps noted that the proposed $0.045-per-kilowatt-hour subscription charge is also far lower than the charge associated with a similar program offered by DTE Energy last year.

“What (Consumers) came up with probably goes further than anything we’ve seen in this state in terms of a voluntary renewable energy purchasing program to date,” Scripps said. “I think this is certainly in the right direction.”

While it remains to be seen how much additional renewable generation may come from Consumers’ program, Scripps said corporate demand is emerging as a key factor in growing states’ renewable portfolios.

“What we’re hearing from companies is that they aren’t interested in simply purchasing (renewable energy credits) or the internal reallocation of existing resources,” he said. “They want identified, additional projects developed.”