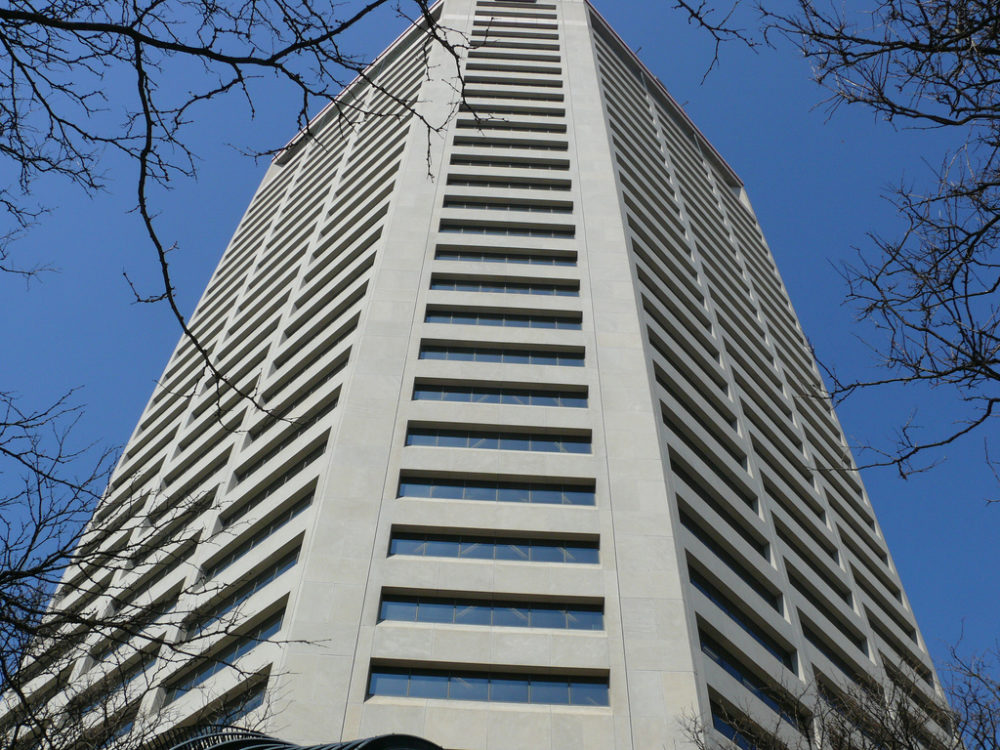 The AEP building in Columbus, Ohio.

At issue is AEP’s proposal to increase fixed charges for its Ohio utility customers by more than twice the current rate—from $8.40 per month to $18.40 per month by 2018. An evidentiary hearing in the case is currently set to start on June 6.

“Increases in the fixed charge will be accompanied by reductions in other charges,” AEP spokesperson Scott Blake said. “Some customers will see their bill decrease while others may see a modest increase, but the average customer will see an increase of a couple of dollars per month.”

The shift means residential customers will see less savings from distributed energy generation, such as rooftop solar, and from energy efficiency investments or other steps to conserve electricity.

“If you create a rate recovery structure for the utility that disincentivizes or disempowers the customer, then we don’t think that’s the right way to go,” said Trish Demeter at the Ohio Environmental Council.

Although the electricity generation market in Ohio was deregulated in 1999, utilities continue to operate as regulated monopolies for the distribution of electric power. The distribution portion of each residential customer’s bill covers a range of costs associated with the delivery of electricity through the grid. (Utility bills include multiple riders for other charges as well.)

Distribution charges for the delivery of electricity include expenses for the wires, poles, substations and other equipment associated with the grid, plus costs for metering, billing and so forth. Utilities have generally charged for some of those costs based on the volume of electricity delivered to a customer through the grid, while other charges have been recovered through fixed fees.

Now AEP wants to shift the mix, loading more costs into the fixed portion of the bill.

“The cost to build and maintain the distribution system does not generally change based on the amount of energy customers use,” Blake said. “Shifting from a variable rate to a fixed charge better reflects the costs associated with serving each customer.”

“This messaging is all from the utility playbook—and it doesn’t hold up,” countered Natural Resources Defense Counsel attorney Samantha Williams. “Just because costs are technically fixed doesn’t mean they belong in a ‘fixed’ charge.”

“And even that theory of what is fixed is suspect,” Williams continued. “Economic theory dictates that, in the long-run, all utility costs (including…transmission lines and distribution facilities) are variable or ‘marginal’ with respect to loads. So those costs the utility says it wants to recover? They should actually go in the per/kWh energy charge, not in the fixed charge.”

“The majority of a customer’s bill will still be based on how much energy they use,” Blake stressed. “Customers who take steps to improve efficiency or generate their own electricity will be able to reduce their overall bill. And if and when their generation resource isn’t providing all of their power needs, our infrastructure will be able to serve them.”

Yet the big question is how much savings customers would still see on their bills by saving energy, Williams said.

“Will customers still be able to have some control over their energy bills even with a higher fixed charge? Sure, to some degree,” she said. “But the more the utility loads up those upfront fees even if it’s just on one side of the bill, the harder it’s going to be for customers to see real, tangible savings from their energy efficiency and rooftop solar investments.”

“AEP’s own data show that the majority of their residential customers will pay more per month with the increase, with about 40% paying an extra $5 per month,” Williams continued. “At a time when moving toward cleaner energy sources is more important than ever, why would we want to do anything to push customers off that path?”

Conversely, if AEP’s plan is adopted, each extra unit of electricity used by a residential customer would result in a smaller increase in bottom-line charges than under the present rate structure.

As a result, the proposed rate changes would “unreasonably dampen energy price signals, discourage conservation by residential customers, and increase energy consumption,” utility analyst Paul Cernick said in testimony filed on behalf of the NRDC on May 2. “It would also unjustly result in subsidization of high-usage customers by low-usage customers and increase monthly bills for the vast majority of AEP Ohio’s residential customers.”

Impacts on the grid

As critics see it, the wrong price signal would hamper adoption of technologies that can benefit the grid.

“Customers are becoming much more central to the way that we’re delivering and using electricity,” Demeter said. “There’s just so many really cool things that are giving people much more power to be informed about their energy usage, to understand what things cost, and to really have a lot more transparency in how they are impacting the environment because of how they’re using electricity.”

For example, smart meters can reduce peak demand by letting customers run appliances for lower rates at certain times of day. Smart thermostats and remote control technologies can lower demand for heating and cooling while customers are away. Innovations in electric vehicle charging could vary when cars charge, depending on whether the system needs to shave peak demand or offload excess renewable generation.

In critics’ view, a jump in fixed charges would discourage those kinds of innovations, as well as distributed generation, such as rooftop solar.

If anything, however, the rate structure should encourage more of those types of investments, Williams said.

“Designing rates that encourage energy efficiency and distributed generation benefits the overall energy grid in a ton of ways,” Williams explained. “It reduces bills for everyone by putting downward pressure on energy rates. It reduces demand for energy and thereby cuts CO2 and other power plant emissions that drive climate change and harm public health. It helps bolster grid reliability and keep the lights on [by using] diverse energy resources and reducing demand for electricity at the most congested parts of the day.”

“That’s important in Ohio because we still have about 60 percent of our electricity coming from coal-fired power plants, which are just churning out unlimited amounts of carbon dioxide emissions and other air pollution that causes asthma and other health problems,” Demeter said. “If we have the tools in the tool box to reduce the reliance on those coal-fired power plants, then we should do it.