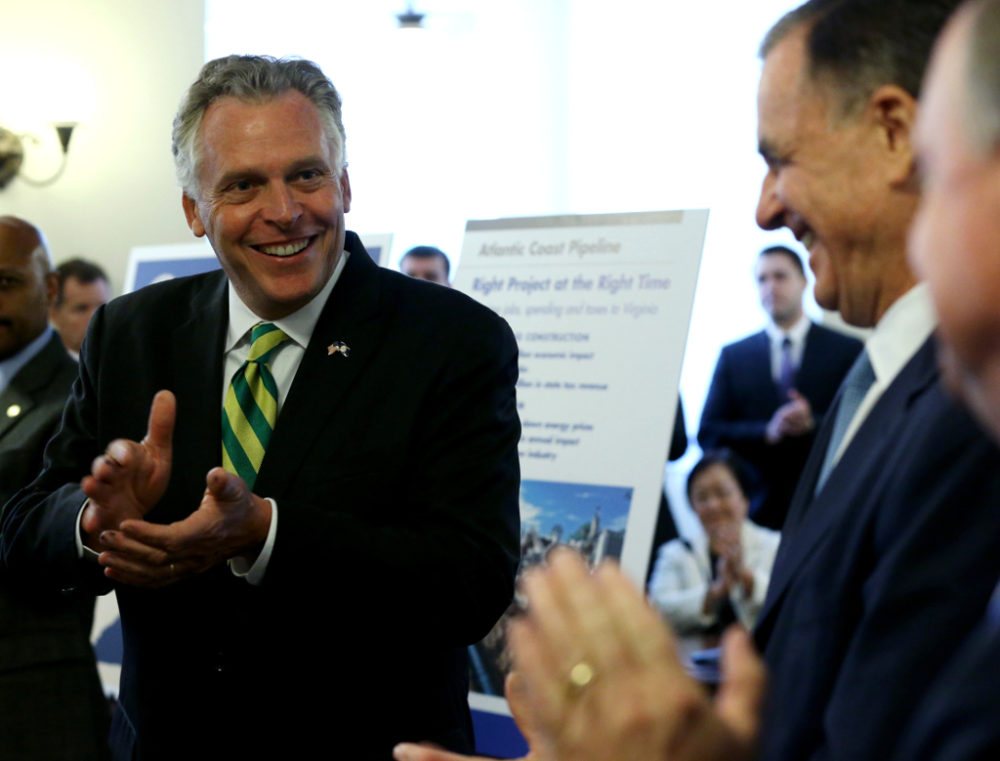 Dominion CEO Tom Farrell, right, applauds along with Virginia Gov. Terry McAuliffe at the announcement of the Atlantic Coast Pipeline at the state capitol in 2014.

A report released this morning by a public accountability non-profit details the interlocking relationships, campaign donations and potential conflicts of interest that Dominion Resources is deploying to secure approval of its Atlantic Coast Pipeline.

The nonpartisan Public Accountability Initiative outlined potential conflicts of interest with state and federal regulatory agencies, donations to campaigns and foundations and efforts by CEO Tom Farrell and a revolving door of lobbyists to influence key decision-makers. Farrell and Dominion are guided in part by Farrell’s brother-in-law, Richard Cullen, who chairs the influential McGuireWoods law firm based across the street from Dominion’s headquarters in downtown Richmond.

“The report does not allege that Dominion is breaking any law or violating even the loose ethics codes that politicians are required to abide by,” said the report’s lead author, Derek Seidman. “Rather the goal of this report is to bring transparency to the powers behind the Atlantic Coast Pipeline (ACP). It’s important for ordinary citizens who stand to be impacted by the pipeline, those whose environment will be affected and the public to know what’s happening” to secure its approval.

“Dominion Energy has stacked the deck and tilted the playing field with its deep pockets, political influence, staff revolving doors with government agencies, and campaign donations to candidates of both parties,” said Kirk Bowers of the Sierra Club’s Virginia chapter.

“Dominion Energy is the third political party in the state,” Bowers continued. “With an army of lobbyists, Dominion manipulates the political system to pass laws that insure profits to their shareholders regardless of the costs to the public.”

A spokesperson for Dominion Energy had not yet seen a copy of the report and declined to comment.

The report cited specific examples of how influential Dominion — now a $40 billion energy conglomerate and the state’s largest donor to political campaigns — has become:

A decision by Virginia’s DEQ to approve or demand more from Dominion may stretch into 2018, in which case the next governor could influence the outcome. The report by Public-Accountability did not delve into Dominion’s hefty investments in this year’s gubernatorial race. But the Daily Progress last month included an independent tally of how much Dominion’s executives, lobbyists, board members and PAC have given to Ralph Northam, a candidate for the Democratic nomination, and his PAC: $109,283 through the most recent reporting period. The likely GOP nominee Gillespie and his PAC received $43,125 from those same donors during that period.