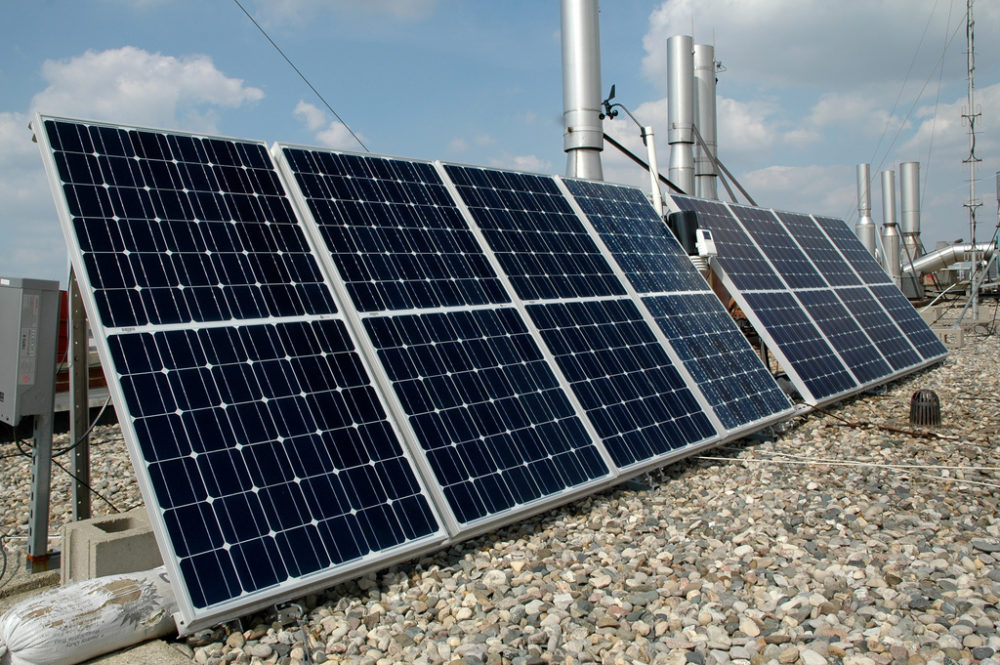 Venture capital invested in clean tech is shrinking, and the capital that is being spent is concentrated on the East and West coasts, not the Midwest, according to a recent study by the Brookings Institution.

A related Brookings study also notes that the number of clean tech patents, a sign of innovation, dropped nine percent between 2014 and 2016 after a decade-long spike.

The study offers some bright spots, however, highlighting the potential for venture capital investment particularly in transportation and energy storage sectors and Michigan’s potential leading role in the transportation sector along with Chicago’s prominence in battery storage.

Meanwhile, clean tech startup advocates and investors say that while they’ve seen the trends Brookings documents first-hand, they are confident that clean tech business, technology and innovation has become so essential to our modern economy that progress will be supported by other funding sources — including the government, corporations, foundations and family offices — regardless of venture capital.

“There are a few of us who can remember before the internet, when all the rage was venture funds in the internet,” said Steve Webster, director of the Cleantech Open Midwest, which nurtures startup companies. “Now the internet is in everything. I think energy is in the same category — it’s across everything. Do you have a technology coming to the marketplace that’s not energy efficient, not green? Well don’t bother, it’s a non-starter.”

Venture capital is money invested in an emerging company and technology with the hopes of making a big profit, usually quickly. In the mid-2000s, venture capitalists poured money into clean tech sectors, including solar energy, biofuels and batteries, amid the expectation of a price on carbon and other regulations that would drive the sector.

But many investors lost a lot of money as many didn’t understand this world — the economic crisis hit, regulations were slow to materialize, cheap natural gas drove down the profit potential of wind and solar, and there were a few high-profile flops like Solyndra. Also unlike information technology and software that could make people millionaires overnight, much clean technology depends on lengthy research and development phases.

A 2016 Massachusetts Institute of Technology study found that of $25 billion invested in clean tech between 2006 and 2011, investors lost half their money; and 150 renewable energy startups in Silicon Valley failed or did not thrive.

Today venture capital investors largely shy away from “deep technology” involving actual materials and physical components, the Brookings Institution notes, and stick to the software and information-related parts of the clean energy sector. They are also less likely to invest in early stage companies.

“A lot of people lost a lot of money” during the clean tech investment boom, said Steve Kloos, partner in True North Venture Partners, a Chicago-based family firm that specializes in early stage clean tech startups. “Those scars are very deep. Not too many people are willing to do a lot in this space now, and those that are are going after the capital-lite middle — saying ‘I invest in Airbnb, that’s clean tech.’”

Airbnb aside, software is integral to many parts of the clean energy landscape, including the smart grid, smart homes and autonomous vehicles, which are widely considered “clean” since their adoption is likely to reduce emissions.

The Brookings study notes that smart grid and energy efficiency technologies have made up nearly a quarter of venture capital financing since 2011, while transportation and solar accounted for 21 percent and 16 percent of funding, respectively, followed by bioenergy and energy storage.

“Tesla was a VC-funded company,” said Mark Muro, Brookings senior fellow and study co-author. “But those are the kinds of investments that might not get made now with this retrenchment from hardware, let alone manufacturing, and retrenchment into more ‘VC-like’ topics and business models, often powered by IT and software which is much more familiar to the VC community.”

Developing complicated and deep technology takes “patient capital” where investors don’t expect a payoff in the short term. While this may not be the specialty of venture capitalists, other funders — including family foundations and angel investors — are willing to take a long view, often because they have a personal commitment to the social or environmental aspects.

Kloos pointed to the CREO Syndicate, a network of investors and firms aimed at clean tech and environmental investing, with the aim of doing good and making a profit.

“CREO was created because family offices really wanted to invest in clean tech but didn’t know how, and they wanted a safe forum where they could get together and learn, figure this space out,” he said.

Corporations are also important investors in clean tech research and development and startup companies, which they might acquire or license in the future. As clean technology once considered cutting edge or niche like electric vehicles or smart appliances becomes increasingly mainstream, corporate investment follows.

The Brookings study notes that companies like Google, General Electric and Duke Energy are investing directly in startups, meanwhile corporations have also launched their own venture capital-style arms including GE Ventures, BMW i Ventures, and Chevron Technology Ventures.

Webster noted that, “We generally don’t rely on venture capital to fund the companies that come through the Clean Tech Open. We do rely on angels, we do rely on funds that are set up to go after agricultural technology, green architecture, water, the internet of things. I don’t worry about whether there are a growing or shrinking numbers of pure energy funds from venture capitalists. I do worry about specific industry sector investors.”

Meanwhile government programs run by experts provide an important vetting and evaluation service, helping venture capitalists and other investors understand which companies and technologies are worth supporting.

The “skinny budget” proposed by President Donald Trump would have done away with important supports for clean tech, including the Advanced Research Projects Agency-Energy (ARPA-E) and the U.S. Department of Energy (DoE) loan guarantee program.

The Brookings study explains that the loan guarantee program funds technologies considered too risky to get financing from banks. The study says it “functions much like a VC investor by investing in promising ideas, [and] has approved 30 guarantees that have helped commercialize diverse technologies such as solar thermal systems, advanced nuclear designs, molten salt storage, and automotive.”

ARPA-E meanwhile has “provided critical seed money, usually up to a couple of million dollars, to more than 500 projects in diverse technologies including solar, wind, natural gas, fusion, bio-engineered fuels, and batteries,” the study says.

Despite Trump’s threats, the budget was never expected to pass and clean tech experts said they are confident government funding of clean technology will continue. Kloos noted that clean technology innovations — like other inventions including the internet — have often grown out of military research, which is sure to continue.

Though the Midwest is known as both a growing market and research hub for clean technology, it is not a hotbed of venture capital investing. Chicago was the only Midwestern metropolitan area to crack the top 10 in terms of per capita venture capital clean tech investment, according to the Brookings study, coming in at number 10. Brookings’ patent analysis found high numbers of patents coming out of Chicago, the Twin Cities and the Detroit area, but relatively little activity elsewhere in the Midwest.

“There’s a disparity between some of the innovation that’s taking place at the universities and national labs and the patent activity and the funding,” in the Midwest, said Erik Birkerts, CEO of the Clean Energy Trust startup accelerator in Chicago. “We’re punching below our weight.”

Birkerts said there is much untapped potential in the Midwest, but it is “understandable” that venture capitalists based in California or the Northeast want to be near their investments and don’t want to spend much time flying across the country to board meetings.

Muro noted that Michigan is a focal point for transportation-related investment given its auto industry history.

“Whether patenting or venture capital, it really jumps out that the auto industry is a huge player and that the emergence of important activity around transportation and storage is a real focal point that happens to be highly focused in the Upper Midwest,” Muro said.

“We’re talking about everything from electric vehicle solutions to low carbon power train advances, but clearly also much of it is IT-driven and app-driven…The confluence of needs of the auto industry and the post-crisis [auto industry] bailout and then investments through the Recovery Act helped strengthen this technology base in the Upper Midwest.”

A rocky but promising path

Ultimately Muro and other experts said they don’t expect the trends in venture capital investment to change drastically, meaning clean tech especially in the Midwest will need to rely on other sources of investment.

“We need to think how else to maintain a great pipeline of ideas and a pathway of finance toward them,” he said. “This is where I look for an increased state role, and also the kinds of initiatives that even philanthropy or the private sector can launch, like the Breakthrough Energy effort of Bill Gates and the assemblage of billionaires trying to provide patient capital to stimulate scale-up of risky technologies.”

“There’s no way to expect that traditional venture capital will come back to clean tech in the way it did 10 years ago, that’s an unreasonable expectation,” concurred Clean Energy Trust director of technology development Ben Gaddy. “The nature of these businesses just doesn’t align with venture capital. That’s fine, but we do need alternative sources of funding.”

Gaddy said the Clean Energy Trust aims to help philanthropists and corporations understand and connect with startups they might not otherwise be aware of.

Kloos added that utilities and other players whose existence depends on clean tech innovations will also drive inevitable, if difficult, progress.

“There’s a ton of promise here, but it’s tough, because the solutions that are going to work are going to be novel solutions, hard science-based innovations, not just a new social media app,” said Kloos. “These societal issues are big, they need to be solved —major problems on the grid, massive societal transformations we’re beginning to see take place. There is opportunity, but it is eyes-wide-open opportunity. It’s not easy stuff.”