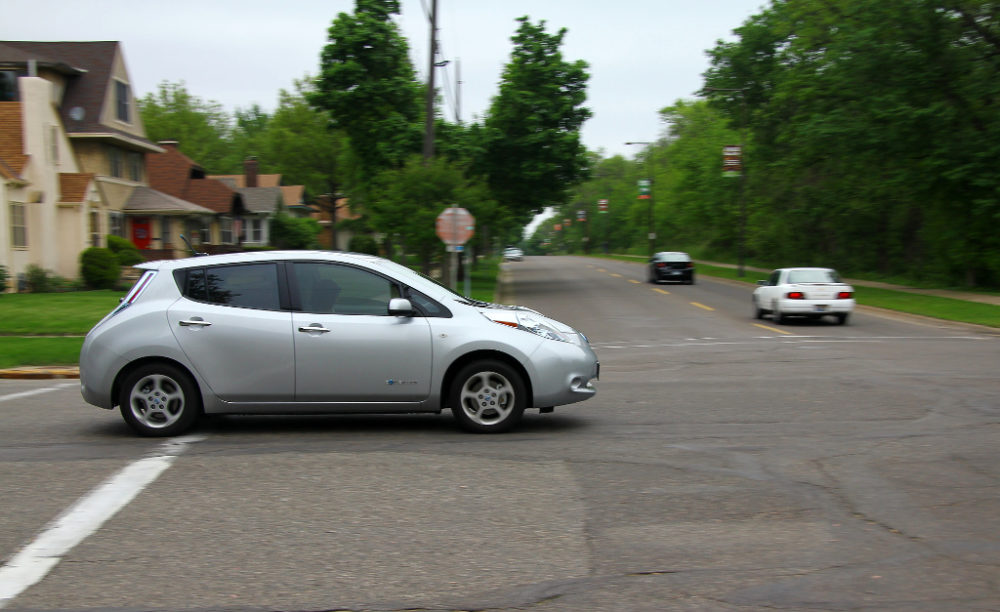 A Nissan Leaf in Minneapolis.

Advocates in Minnesota agree that electric vehicle owners should help pay for roads, but raise questions about the fairness of a new $75 fee intended to offset lost gasoline tax revenue.

However, Kukkonen says, “I would have liked to have seen something like a $50 charge.”

The Great Plains Institute’s Brendan Jordan would put that amount even lower.

“It’s clear we’re using less gas and we have less of a revenue stream to pick up those losses,” said Garofalo, who owns a Tesla. “This is a modest fee to help pay for the road system we all use.”

How much is fair?

Every year vehicle owners pay a registration fee of 1.25 percent of their car’s value. Because EVs carry a higher value their owners pay more than drivers of conventional gasoline powered vehicles.

Minnesota drivers pay a fuel tax of 28.5 cents per gallon. The $75 fee is roughly equivalent to what someone driving a 45 mpg hybrid pays in gasoline taxes if driving 12,000 miles per year.

“If you want to calculate a fair fee [for electric cars] it would be $25 or $30 a year, not $75,” Jordan said, noting that the EPA places the fuel economy equivalent of electric cars at around 100 mpg. “Now you end up with EVs paying more than an equivalent highly fuel efficient gas vehicle like a hybrid or a plug-in hybrid.

“That’s nonsensical, especially when we’re seeing they pay their far share and now they’re being asked to pay more.”

Impact in other states

At least seven other states have fees, including Michigan. Current and proposed fees fall into the $50 to $300 range, the report said.

When Georgia dropped a program that offered as much as $5,000 in tax credits and added a $200 annual charge, EV sales plummeted, according to the report.

Kukkonen, who works with car dealers to help them better prepare to sell electric cars, doesn’t expect the fee to have an impact on sales. However, he believes it would have been better to wait until there are more cars on the road.

Currently, there are about 5,000 electric vehicles registered in Minnesota, so the revenue will be minimal.

Jordan says it would make more sense to add the fee “when there is momentum behind the technology” rather than when the market is as small as it is today.

“The unintended consequence might be to suppress interest in something that over the long haul could pay its share and contribute to the revenue we need to maintain our roads,” he says. “But if you smother the baby in the crib I’m not sure you’re going to get there.”