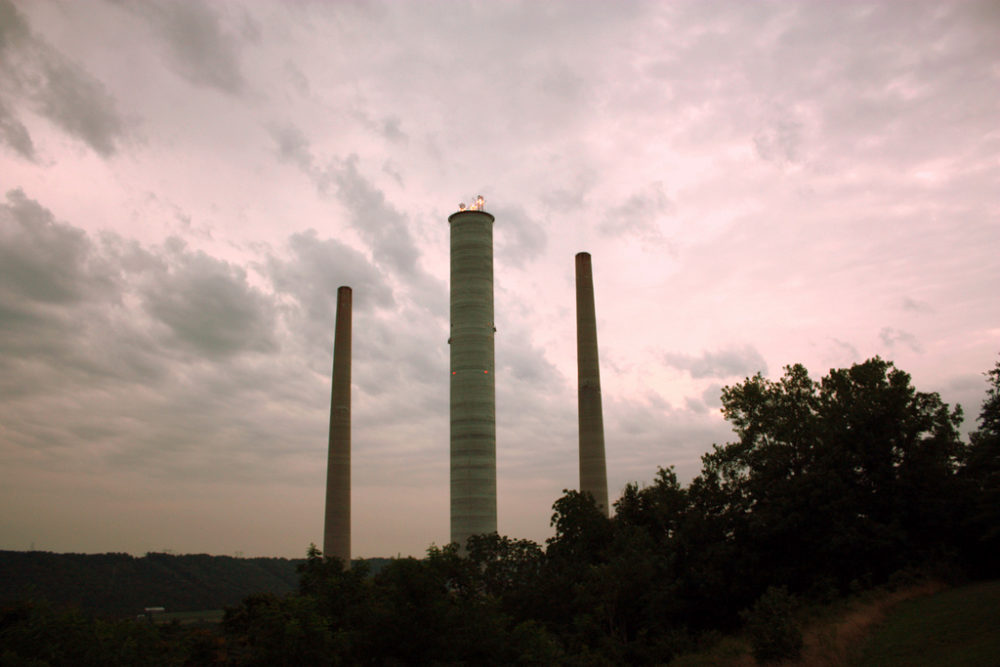 The Clifty Falls coal plant in Madison, Indiana is one of two power plants that an Ohio bill seeks subsidies for.

The Ohio House Public Utilities Committee’s agenda shows a version of House Bill 239 could get voted out of committee today, setting the stage for possible passage by the House of Representatives. The bill would require all utility customers to subsidize costs of two coal-fired power plants owned by the Ohio Valley Electric Cooperative (OVEC). Those plants are the Kyger Creek plant near Cheshire, Ohio, and the Clifty Creek plant in Madison, Indiana.

Meanwhile, a June 20 report from the Analysis Group concludes that market forces — especially lower prices from shale gas development — are behind the general decline of coal-fired power plants’ competitiveness. The American Wind Energy Association and the Advanced Energy Economy Institute funded the report.

Even before today’s report, it was clear that the two OVEC plants were in trouble. OVEC’s utility shareholders include American Electric Power, FirstEnergy, Dayton Power & Light and Duke Energy, among others.

“Since the two power plants are uneconomic, the logical step would be for the utilities to close them down,” Dick Munson of the Environmental Defense Fund said.

Utilities have sought subsidies for the two OVEC plants since 2014.

In early 2015, the Public Utilities Commission of Ohio ruled against rider requests from AEP and Duke Energy. The proposed charges could “result in a net cost to customers with little offsetting benefit,” the PUCO wrote in the AEP case.

In March 2016, however, the PUCO approved charges for AEP and FirstEnergy for both the OVEC plants and additional plants. Then federal regulators ruled that the proposed power purchase agreements — called “bailouts” by opponents — would require scrutiny under rules meant to prevent noncompetitive sweetheart deals between utilities and their affiliates.

FirstEnergy dropped any reference to a power purchase agreement, while still seeking the same charges for the OVEC plants, along with two other plants. “Nothing changes,” FirstEnergy spokesperson Doug Colafella said last spring.

After escalating requests for yet more charges, that case led to the PUCO approving a “distribution modernization rider” for FirstEnergy of about $204 million per year. Ratepayers had to start paying the charges in January, even though opponents still cannot challenge the ruling in the Ohio Supreme Court.

Meanwhile, AEP scaled back its request to include just the OVEC plants. And Dayton Power & Light has sought its own rider to bolster the company’s financial integrity.

AEP also announced last year that it would seek reregulation of Ohio’s generation market. HB 239 doesn’t do that per se, but it would use ratepayers’ money to subsidize utilities’ costs for the two aging plants.

The new ripple suggested by sponsors Ryan Smith (R-Bidwell) and Rick Carfagna (R-Genoa Township) is that the OVEC plants are unique because they were built when electricity was needed to enrich uranium during the Cold War.

“Ohio’s utilities did not hesitate to support national security at a critical time in our nation’s history,” they said in their joint sponsor testimony. Also, they said, any ownership transfer would require unanimous agreement among all of OVEC’s in-state and out-of-state stakeholders.

Utilities also have “disparate outcomes,” Amy Spiller of Duke Energy said in her proponent testimony. Because OVEC member utilities in regulated states get full cost recovery from ratepayers, Ohio utilities should get the same advantage, she argued.

“Why should ratepayers suddenly be footing the bill for what some proponents of this bill are claiming is an unworkable contract between private companies?” countered Trish Demeter of the Ohio Environmental Council. “If OVEC wants to continue operating these sixty-two year old coal plants, then shouldn’t they take on the business risk rather than saddle Ohio customers with the risk?”

Nor does the reference to national security curry sympathy with opponents. “The argument that the plants are needed for national security falls flat,” Ohio Citizen Action’s Rachael Belz said in her testimony on the bill, noting health and environmental costs that utilities have been “externalizing … to the rest of us.”

Indeed, if the Cold War justification can justify propping up older plants with outdated technology, Munson asked, “What’s next? Subsidizing a musket factory?”

“Moreover, regardless of a past national security connection, the Ohio utilities had an extended opportunity over 60 years for charging consumers for profits and for the costs of the plants,” Michael Haugh of the Office of the Ohio Consumers’ Council said in his testimony on the bill. “Consumers do not owe the utilities anything more at this point.”

In fact, Munson added, Ohio utilities have already gotten billions of dollars from past riders meant to ease their transition to competition. In his view, the OVEC bill would allow “double dipping” for the utilities.

Compared to newer, more modern technologies, the OVEC bill is like buying “a 1950s-era Studebaker that runs only 50 percent of the time and costs billions of dollars to keep up over its lifetime,” said Samantha Williams of the Natural Resources Defense Counsel.

Moreover, the proposed “$4–8 billion bailout of the antiquated OVEC coal plants is an impediment to new private sector investment for gas-fired plants in Ohio,” said Bill Siderewicz of Clean Energy Future, which develops gas generating plants. In his view, that could hurt the state’s competitive position.

“The utilities want the Ohio General Assembly to provide subsidies so they can ignore the energy markets that are working…and avoid having to write down the value of these plants — as they should have done years ago,” said Kim Bojko, testifying on behalf of the Ohio Manufacturers Association.

Although Analysis Group’s report does not specifically mention OVEC, it addresses the “bigger picture of whether the coal industry has been disadvantaged by public policy versus market forces,” said Ted Ford of Ohio Advanced Energy Economy.

Department of Energy Secretary Rick Perry raised that question when he told his staff to examine “market-distorting effects of federal subsidies that boost one form of energy at the expense of others.”

“Ultimately, the evidence shows that electricity markets have undergone a fundamental shift,” the report authors wrote. In their view, the primary factors are the shale gas boom and the economic downturns in 2008-2009. Trends towards more energy efficiency and renewables also exert downward pressure on electricity prices, but those impacts are “a distant second” to competition from natural gas, they added.

The report also rejects claims that coal or nuclear plants are essential “baseload” power, because “many power plants can operate either around the clock or in cycling mode, and provide the same or more essential reliability services that are provided by coal and nuclear resources.”

In short, “there is no evidence that the changing U.S. power mix endangers electric system reliability,” noted Evan Vaughan of the American Wind Energy Association.

In the context of HB 239, the report indicates that the OVEC plants will likely remain uncompetitive, Ford said. “They’re not going to make a profit.”

“With no end in sight to abundant natural gas and rapidly falling renewable energy costs, coal power simply can’t compete,” Munson said. “Ohio lawmakers are trying to rush through harmful legislation that would force Ohioans to prop up dirty energy of the past, rather than encourage the investment and innovation needed to build a clean energy future.”