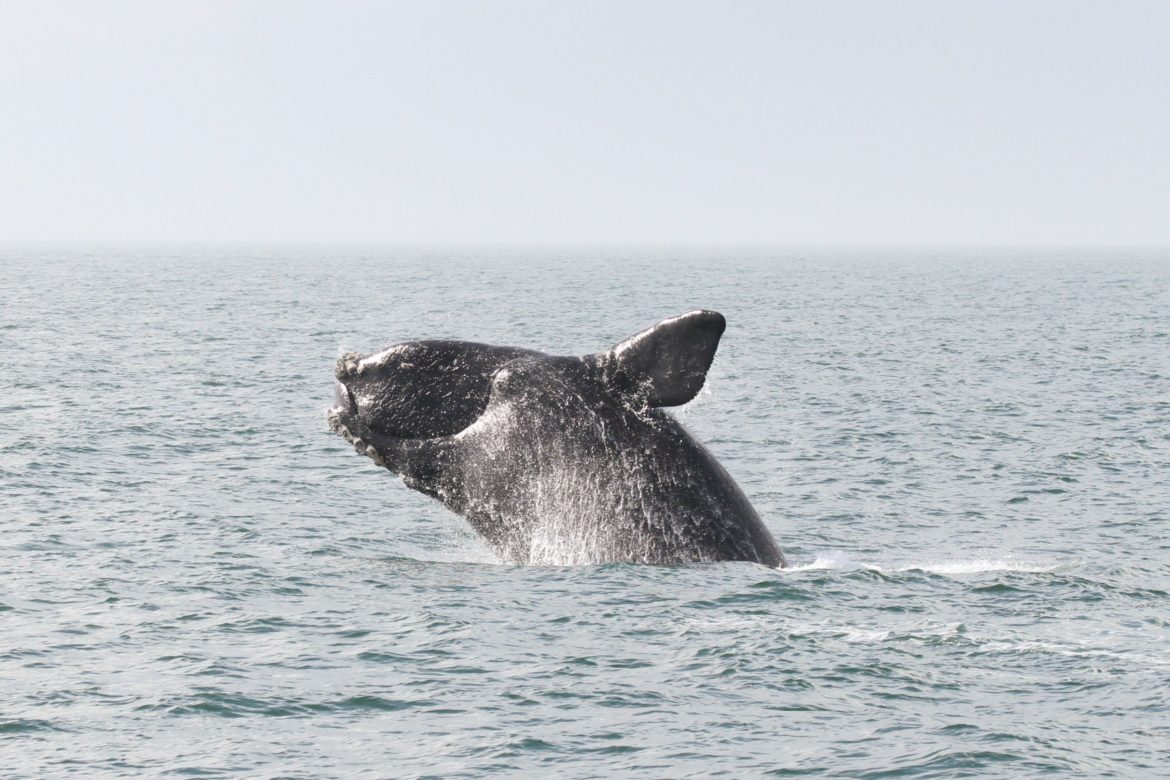 The endangered North Atlantic right whale, whose already-dwindled numbers are decreasing, in part due to human activity.

As a key deadline looms in President Trump’s push to expand offshore drilling, a new study shows seismic surveys for oil and gas may harm tiny ocean creatures called zooplankton as well as the whales and dolphins that feed on them.

Conservationists say the new study published in the journal Nature Ecology and Evolution should prompt Trump’s regulators to rethink seismic oil and gas exploration in a stretch of the Atlantic Ocean from Delaware to Florida.

“The study underscores the message that we’ve been sending all along, that seismic testing is not only a precursor to drilling, but it’s also really harmful, in and of itself,” said Blakely Hildebrand of the Southern Environmental Law Center.

Seismic surveys use repeated, loud bursts of compressed air that travel deep into the ocean floor, then bounce back to the surface with information about oil and gas deposits.

For decades, scientists have said the airgun bursts can injure or kill marine animals that depend on their hearing to find food and mates. Increasingly, studies show the blasts can also threaten fish and invertebrates such as scallops and lobsters.

New research shows the airguns can kill crustaceans, tiny jelly fish, fish larvae and other marine life known as zooplankton from three quarters of a mile away — orders of magnitude farther than previously realized.

Public comments are due July 6 on the first of two federal permits the industry needs to conduct the surveys in the mid- and Southern Atlantic Ocean. Five different companies have applied.

“We hope that this new study will force the agencies and the administration to go back to the drawing board,” said Hildebrand, “and we will make that case very strongly in our comments on the proposed seismic authorizations.”

Randy Sturgill, an organizer with Oceana in Wilmington, North Carolina, called the zooplankton study a “game changer,” in part because it can be so easily understood by the public.

“John Q. Citizen knows that without this important portion of the food chain, everything upstream from there is at risk.” That’s why, Sturgill said, “the administration is going to get an earful.”

‘Serengeti of the Atlantic’

The federal Marine Mammal Protection Act allows “incidental harassment” of dolphins, whales and porpoises from seismic surveys and other ocean activities, so long as the government minimizes the harm and gives the public the opportunity to weigh in.

Even before last week’s study, scientists argued the surveys’ impacts were more than incidental, especially for the endangered North Atlantic right whale, whose already-dwindled numbers are decreasing, in part due to human activity.

“Adding another major stressor to their environment in the form of seismic surveys would, we believe, substantially increase the risk that the population will slip further into decline and would jeopardize its survival,” wrote more than two dozen right whale experts in a letter last year.

Duke University scientist Doug Nowacek, one of the letter’s signers, reiterated those concerns on a press call earlier this month, highlighting a spot off the coast of Cape Hatteras, North Carolina, known for its diversity of marine life.

“We may go out there on a given day and see five, six species of whales and dolphins. It’s the Serengeti of the Atlantic,” Nowacek said. “I remain deeply concerned about the impacts on the region if the surveys are allowed to move forward.”

Heeding pleas of coastal businesses and elected officials from both parties, last year the Obama administration rejected offshore drilling off the southern Atlantic Ocean until at least 2022. Days before Obama left office, officials also denied six permit applications for seismic testing, arguing in part that there was “no immediate need for these surveys.”

But President Trump has moved quickly to undo these policies, issuing an executive order in April that directed his administration to “expedite” permits for seismic testing and “give full consideration” to drilling in the Atlantic.

In its call for public comments on five potential seismic permits, the National Oceanic and Atmospheric Administration makes clear it won’t consider blanket, anti-drilling statements as part of its deliberations.

But NOAA spokesperson Jennie Lyons says the agency encourages comment on seismic surveys and their impact on marine mammals specifically, including last week’s study on zooplankton.

Since zooplankton are food for fish as well as mammals, the study could also factor into another round of permitting expected later this year, when the Bureau of Ocean and Energy Management must consider a range of environmental impacts — not just that on whales, dolphins and porpoises.

A BOEM spokesperson said it would be “premature” to comment on the zooplankton study right now, but that the agency was “conducting a careful review to determine how to consider it for environmental analyses” related to seismic surveys.

“I hope the folks at NOAA and BOEM take a look at this new science, and they don’t sweep it under the rug,” Oceana’s Sturgill said. “It’s extremely important they give it a fair hearing.”