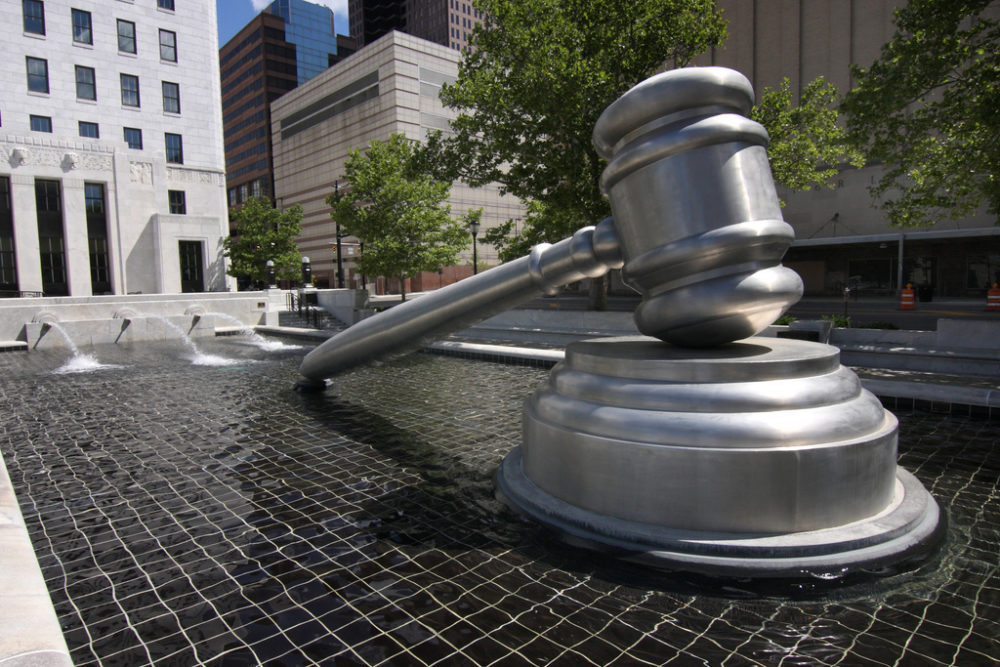 "Gavel," a sculpture by Andrew F. Scott, outside the Supreme Court of Ohio.

Critics say an Ohio court decision last week underscores the urgency of a pending bill to address unfairness under current law, while opening the door to more efforts by utilities to shift the economic burdens for past pollution to today’s customers.

Under the Supreme Court of Ohio’s June 29 court decision, Cincinnati-area utility customers must pay $55.5 million to Duke Energy for cleanup of contamination from plants that haven’t run in more than 50 years.

“It is a disappointment that Cincinnati-area customers must pay tens of millions of dollars for the cost of cleaning up their utility’s defunct manufactured gas plants that date back to the 1800s,” said spokesperson Dan Doron at the Office of the Ohio Consumers’ Counsel.

The basic issue in the case was whether environmental cleanup costs for old contamination at two manufactured gas plants could be recovered from Duke Energy’s current customers or would be borne by the company and its shareholders.

The plants have not been used for more than 50 years, and above-ground equipment and most associated structures have been removed. Any remaining utility activity at the sites is unrelated to the former plants.

In Doron’s view, neither the Public Utilities Commission of Ohio nor the court should have let Duke Energy pass the cleanup costs along to ratepayers under Ohio law.

“Consumers should not pay for utilities’ investment-related costs if the investments are not used and useful to consumers for their utility service. Also, under another standard in the law, consumers should not pay for utility expenses that are not incurred for current utility service,” Doron explained. “The position of the Consumers’ Counsel was that the clean-up expenses for long-defunct manufactured gas plants (shut down in 1928 and 1963) did not pass the standards that protect consumers in the ratemaking process.”

“No matter how the properties are currently used, the vast majority of the costs of environmental cleanup are not associated with the current use and usefulness of the utility’s activities on the site, and the cost of the cleanup should not be part of the rate base,” said economics and public policy analyst Ned Hill at Ohio State University.

Nor would Hill consider the cleanup to be an operating expense of providing utility service. Although the cleanup was recent, liability for whatever cleanup might eventually take place was known as early as 1988, and the risk should have been factored into the company’s capital asset value, he observed. “The compensation for these costs [from ratepayers] is an economic windfall to stockholders,” Hill said.

“The standards applied to the ‘used and useful’ criteria seem to be very loose as a result of this order,” said Dan Sawmiller of the Sierra Club. In his view, “allowing cost recovery despite any usefulness of the facilities in providing service eliminates important cost protections for Ohio’s utility customers.”

Duke Energy does not have other manufactured gas plant sites in Ohio, according to company spokesperson Sally Thelen. Nonetheless, other utilities might try to use the court’s decision in other cases.

“This creates a precedent on the used and useful standards of law that is very liberal for the utility,” Sawmiller observed.

“This case offers the prospect of utilities using the location of plant and equipment related to their state-regulated transmission and distribution businesses — which remain regulated monopolies — on properties that are mainly part of their generation business as pry bars to shift historical cleanup costs and future decommissioning costs onto ratepayers,” Hill added. “This could become a contentious public policy issue in the near future.”

Duke Energy’s obligation to clean up the contamination comes from the1980 federal Superfund Act. The law can impose strict, joint and several liability for cleanup of pollution, even if the disposal took place long before the law took effect.

For a while, exposure from Duke’s former manufactured gas sites was deemed limited. Then news came about an adjoining landowner’s development plans near one site and construction of a bridge near the other. Duke Energy began detailed investigation work for cleanup in 2007 at one site and 2010 at the other. The company then asked the Public Utilities Commission of Ohio to let it recover the costs from ratepayers.

Duke does use some part of the properties for utility purposes unrelated to the manufactured gas plants, so the PUCO staff recommended allowing recovery for about $6.4 million out of a total of almost $63 million. The regulatory staff would have disallowed the rest because most of the costs were for areas “that are not currently used and useful for natural gas distribution service.”

Nonetheless, the commission decided that Duke’s customers would pay about $55.5 million, with its shareholders bearing the much smaller burden of the carrying charges for the debt. The Supreme Court of Ohio affirmed that decision.

Besides the fact that some unrelated activities still took place on part of the land, the majority noted that the cleanup costs represented a current legal liability. Consequently, the four-judge majority felt it was appropriate for ratepayers to pick up the tab.

Three judges dissented. In their view, the fact that some unrelated infrastructure might be on another part of the land did not automatically make most of the costs recoverable. They would have sent the case back to the PUCO for further proceedings.

“The court’s decision recognizes/confirms that compliance with environmental laws is a necessary cost of providing utility service,” noted Thelen.

“Duke Energy Ohio undertook its remediation efforts under Ohio’s laws that encourage proactive, coordinated remediation,” she said when asked about how the costs benefit Ohio ratepayers. “These remediation activities are intended to protect the public and the environment.”

Nor, in Thelen’s view, did the historical nature of the contamination bar cost recovery. “The MGP plants are retired, but the property on which they were located is still in use for our delivery operations,” she said. “The court’s conclusion rightly recognizes that utilities incur many types of recoverable expenses in order to provide service, including expenses that are not tied to specific facilities or physical property included in [the] rate base.”

For now, Duke Energy’s customers will pay the charges. But questions posed by the court’s decision remain.

“The charges will be $100 per consumer, on average, over the five-year collection period,” Doron noted. However, ratepayers have already paid a chunk of that. That’s because absent a stay, current Ohio law lets utilities start charging for riders and similar rate increases as soon as a PUCO order approving those charges becomes final.

The Ohio Consumers’ Counsel and other challengers initially got a stay from the court, but then Duke Energy objected. When the challengers could not post a bond of more than $2.5 million, the court lifted the stay.

FirstEnergy’s Ohio utilities weighed in on the side of Duke Energy in insisting on a bond.

That rule is a potential issue in a pending FirstEnergy case.

That dilemma exists because some decisions by the Supreme Court of Ohio have interpreted a law against retroactive rulemaking to be a ban on refunds. In one 2014 case, the court ruled that American Electric Power’s Ohio customers could not recover $368 million of illegal overcharges.

“House Bill 247 would remedy for utility consumers this unfairness that has persisted for many years,” Doron said. Among other things, the bill would require refunds for any charges later found to be “unreasonable, unlawful, imprudent, or otherwise improper.”