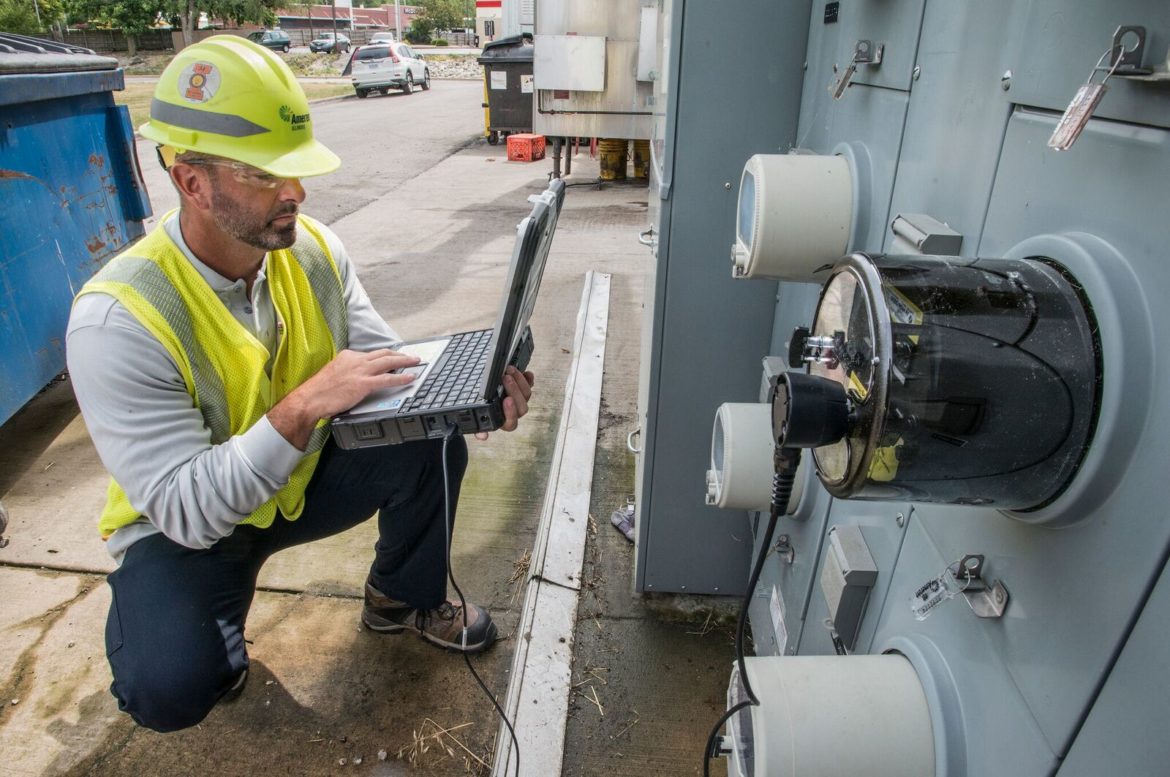 As smart meter usage expands, so do questions about the ways utilities and other companies can harness energy data to advance grid technology.

Advocates say smart electricity meters, working in turn with the smart grid, are a prospective driver of energy efficiency improvements as well as variable sources of energy like wind and solar power—in addition to giving individual customers a more granular picture of their energy use.

However, the prospect of nearly real-time electricity monitoring has led to confidentiality concerns that several Midwest states have answered through policies and laws protecting consumer privacy. But experts say if those laws are too restrictive, they can limit the ability of third-party companies to innovate.

The number of smart meters installed in Midwestern homes, businesses and industries has surged since the beginning of the decade. In 2010, the region was home to 2.2 million smart meters, a figure that ballooned to 10.2 million five years later, according to the Energy Information Administration.

David Kolata, executive director of Citizens Utility Board, an Illinois consumer group, said work by utilities such as Ameren Illinois and Commonwealth Edison will result in 100 percent meter deployment by 2021.

Meter information sharing can be a component of Illinois’ power evolution, too, thanks to recent approval by the Illinois Commerce Commission of an anonymous data usage program from Commonwealth Edison. ComEd’s program allows access to unidentified interval energy usage statistics for all zip codes where the utility has set up smart meters.

Via ComEd’s “Anonymous Data Service,” the data gathered is localized by zip code, with “fine grain” information on power use scrubbed of any identifying characteristics. In addition, external parties have 35 days to download the requested unspecified data through a secure ShareFile system, after which access to the data ceases.

Usage data could be utilized for any number of cutting-edge innovations, Kolata said. Home automation companies like Nest might use meter readings as a foundation to build the next smart thermostat. Researchers could study the data to learn why energy consumption varies across regions. Consumers themselves can download and share their electricity use with Green Button, a password-protected online portal.

“There’s waste in our electricity system going back to the old infrastructure,” said Kolata. “As we move into higher-tech automation, there will be additional opportunities to capture these efficiencies.”

The road to advancement

For Consumers Energy households with smart meters installed, encrypted data is disseminated in text form once a day through the Verizon Wireless Network. Customers can follow their daily energy expenditures on a private website interface and adjust their power use accordingly, said Kathryn Burkholder, community affairs manager at Consumers Energy.

“If they have an old fridge in the basement, they can plug it in for an hour, then go online to see how much their energy use increased when the appliance was on,” said Burkholder. “They’re able to see day-to-day how much their bill is going to be by the end of the month.”

Burkholder said Consumers Energy does not share any form of granular utility information with third-party developers.

“At this point, we want to protect customer privacy,” she said. “There are laws protecting people, and we will continue to follow those.”

Consumer empowerment and data ownership are the watchwords for Michigan state Rep. Gary Glenn (R-Midland), who introduced a bill in February to give residents the right to decline having a smart meter mounted on their properties.

Michigan House Bill 4220 would allow customers to “self-report” their utility usage, which would then be verified by company representatives several times each year. Consumers Energy smart meter opt-out fees run at $70 for the initial charge, plus a $10 monthly charge to cover in-person meter readings. Glenn’s bill caps the monthly fee at $5 and allows utilities to charge an initial fee that matches the cost of removing the meter.

‘People should be free to choose what kind of technologies are installed on their homes.’

HB 4220 hasn’t yet moved to the House floor for a vote, but Glenn is a firm believer in his push to keep personalized meter data in his constituents’ hands. About 15,000 DTE and Consumers Energy customers, out of a total 4 million Michigan energy customers, have opted out of the smart meter program, citing privacy and other concerns.

“Our bill does not prohibit smart meters, but people should be free to choose what kind of technologies are installed on their homes,” said Glenn.

Currently established privacy regulations are necessary to shield users from unwanted data collection, but they also pose as an obstacle on the road to smart grid advancement, said Alexis Abramson, a Case Western Reserve University professor who heads up the school’s Great Lakes Energy Institute.

“Hourly meter readings would be the longest interval to truly realize the smart grid or Internet of Things future that we have in mind,” Abramson said.

A benefit to customers

In Minnesota, the state’s Public Utilities Commission approved plans from power companies to aggregate smart meter data at a level that safeguards residential and commercial users while still providing third-party developers with a relatively high level of detail. Although the PUC did not set a standard aggregation level in its December 2016 decision, the commission encouraged utilities to devise standards that shield the state’s smart meter users.

Fresh Energy, a Minnesota nonprofit and supporter of a transition to a clean energy economy, advocates for a “4/50” aggregation level for whole building and community level data. In order for aggregated data to be accessible at the 4/50 level, there must be at least four customers included, none of whom make up more than 50 percent of the selected group’s total power usage.

“A 15/15 aggregation standard would require 15 customers with none of them making up more than 15 percent of total energy usage,” said Ben Rabe, a senior policy associate at Fresh Energy, which also publishes Midwest Energy News. “These are the two most common aggregation levels discussed for adequately protecting customer data security.”

Fresh Energy supports the release of monthly ratepayer energy use statistics in Minnesota, a stance similar to an Ohio regulation barring electric utilities from disclosing residential smart meter data “that is more granular than the monthly historical consumption data…without the customer’s consent, or a court or commission directive ordering disclosure,” as stated in the Ohio Administrative Code.

The PUC decision only discusses aggregation of monthly data, but all parties on the docket, including Fresh Energy, acknowledged there will be interest in more granular data as the grid modernizes.

Minnesota’s current policy is beneficial for residents tracking time-of-use electricity expenditures, said Rabe. Customers who want to save money can shift their energy use away from hot summer days and other peak times.

Meanwhile, a B3 benchmarking system from Minnesota utility Xcel Energy automatically and securely transfers meter data to property owners who sign up, but the meters only collect those stats at the end of the month.

“Building-level data is good for reducing usage during period of high strain, and helps owners understand where their energy usage is going,” said Rabe. “We would like to see more demand response capabilities in Minnesota, but the state isn’t taking advantage of those in terms of the grid. As far as (the usefulness of) more granular information, we have to continue to examine the issue.”

Precise data ‘hard to come by’

In Ohio, utilities cannot share even monthly customer data without written or electronic consent, a form which must also contain a statement highlighting a ratepayer’s right of refusal to have their information released by a utility.

“Opting in is the operative term here,” said Abramson of Case Western University. “As it stands, nobody can have access to your home energy data besides you and your utility.”

Such precautions may hamstring innovators needing granular data for new technologies or to identify efficiencies both at the individual level and across the broader energy spectrum, Abramson noted.

“You can take a building’s 15-minute energy data, and without setting foot inside it will tell you how your HVAC cooling schedule can be changed for ‘x’ amount of dollars,” said Abramson. “Companies could use that data, but privacy issues make it very hard to come by.”

While gathering the same type of data as traditional electricity meters, smart meters are designed to be read remotely on a far more frequent basis — typically in 15- or 30-minute intervals. Through smart meters, a utility could disconnect delinquent ratepayers from service without an in-person visit to their home.

Power providers maintain that the information collected is secure and largely anonymous, but groups like the Electronic Privacy Information Center (EPIC) have pushed back against smart meter plans. According to EPIC, identity theft, behavior tracking and even surveillance are among the possible consequences of a system that enables access of usage data by service providers or third-party energy management assistance programs.

Earlier this year, the Ohio PUC approved a plan by American Electric Power’s Ohio Power Company to install 894,000 smart meters in Ohio homes over the next four years. The program includes the use of Volt/VAR Optimization (VVO), a technology designed to reduce energy usage without requiring any action from the customer. AEP previously installed 132,000 smart meters in central Ohio as part of its so-called GridSmart demonstration.

Mining any true improvements from these meters would require, at the least, hourly data checkups, said Abramson. A Department of Energy-funded project at Case traces minute-by-minute energy use at campus buildings, creating a “virtual audit” able to diagnose energy issues and propose solutions.

Smart sub-metering systems monitor individual devices such as washing machines and hot water heaters, but there are no plans for a sub-meter program in Ohio, Abramson said.

‘It would be beneficial if some of these state regulations did not exist.’

Program participants sign a data usage rights contract with the company, an agreement that includes multiple layers of security. Even with these protections in place, JCI is able to determine consumption patterns that translate to easy-to-implement automations, which anonymized smart meter data doesn’t allow.

“When we share data from outside (the company), we’re never able to tell its location,” said Park. “It would be beneficial if some of these state regulations did not exist.”

Those concerned about cybersecurity and consumer anonymity are supportive of some degree of data sharing, as long as it’s in residents’ best interests.

“Whether it’s medical records or your utility usage or anything else, that should be your information, and you should be the one choosing to share it,” Jordan said. “I don’t oppose the ability of people to have smart meters, but they should not be forced to partake in the program.”