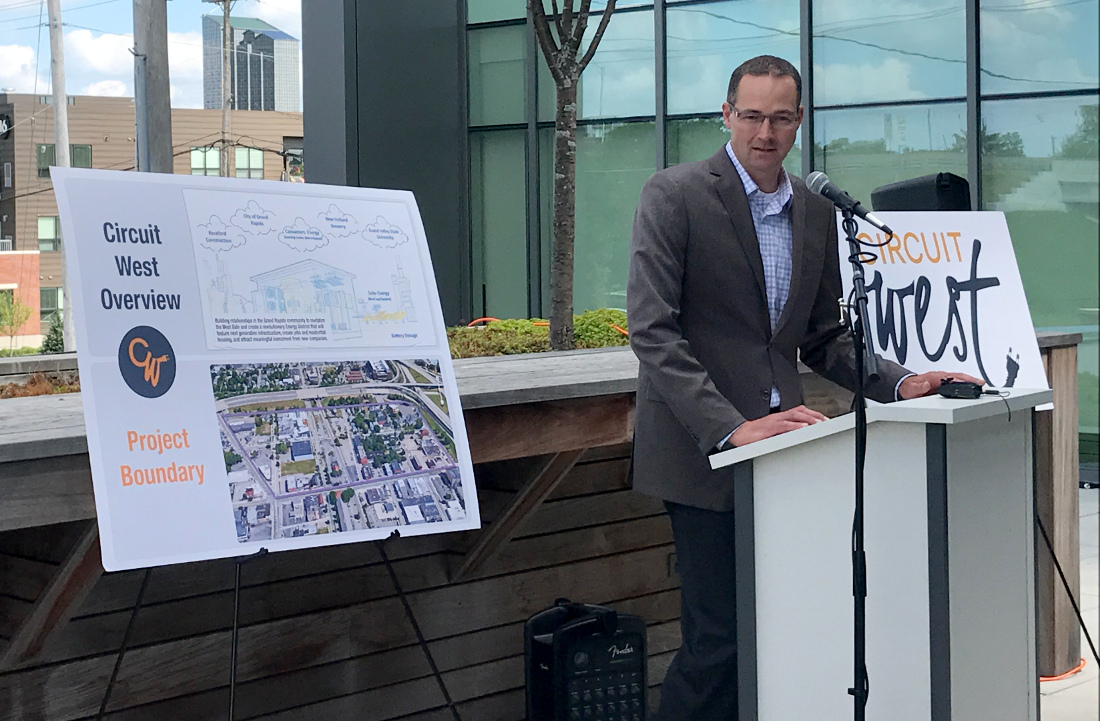 Garrick Rochow, senior vice president of operations at Consumers Energy, calls the Circuit West project a “first of its kind” in Michigan.

As blighted and empty properties are being revamped on Grand Rapids, Michigan’s West Side, a major utility is partnering with the city and a local developer on an “energy district” equipped with solar panels and battery storage to accompany the growth.

The Circuit West project spanning roughly 10 blocks near downtown is Consumers Energy’s first solar-plus-storage effort in the state. It will comprise up to 1 megawatt of solar with about half as much battery storage capacity.

Though it will be connected to Consumers’ transmission lines and not act as an island, utility officials say the project is like a microgrid in concept. Instead of providing backup generation in the case of outages, the batteries are meant to smooth generation gaps when the sun is not shining and provide a consistent flow of solar-generated power.

Construction of new mixed-used buildings is underway, and crews have been removing transmission lines and burying the energy infrastructure underground. The plan is to add solar panels to the roofs of new buildings, which includes a 30,000-square-foot grocery store.

The renewable generation is part of a broader clean energy plan for the area that includes energy efficiency and demand response efforts in buildings, LED streetlights and electric vehicle charging stations.

Garrick Rochow, senior vice president of operations at Consumers Energy, called the plans for “next generation infrastructure” a “first of its kind” in the state.

“We’re setting a precedent for how we look at the grid of the future,” Rochow said. Circuit West will be a sort of test case to be deployed elsewhere in the utility’s territory, he added, which will include “greener, more modular forms of supply” like solar and storage.

“We’re building it out and learning a lot from it,” Rochow said.

While Consumers has launched community solar projects in its territory and is partnering with Michigan State University on a two-year battery storage pilot project, Rochow said this is the first time the utility is “putting it all together.”

Consumers is partnering with Rockford Construction, a major development firm that owns several properties in the district and acts as a developer and property manager. Rockford’s Platinum LEED-certified headquarters, which opened in 2013, is also located in the middle of the district.

Eventually the clean energy measures are meant to keep energy costs low for the company, and ultimately its tenants.

“The goal is to ultimately help lower operating costs,” VanGessel said. “We wouldn’t do it if we didn’t feel that the localized energy grid is a good solution to that.”

“The way these different things are layered is significant,” Scripps said. “That comprehensive approach to integrating advanced energy resources into neighborhood redevelopment and revitalization could be the biggest takeaway out of this.”

While Scripps pointed to EcoDistricts in Austin, Texas and Boston’s Innovation District for integrating renewable energy into neighborhoods, the concept hasn’t yet been done in Michigan.

“These are two well-known companies (Consumers and Rockford) that are publicly talking about how we integrate energy storage,” Scripps said. “I think we’ve gone from (storage) being interesting and out there to how do we integrate it into the grid and energy mix.”