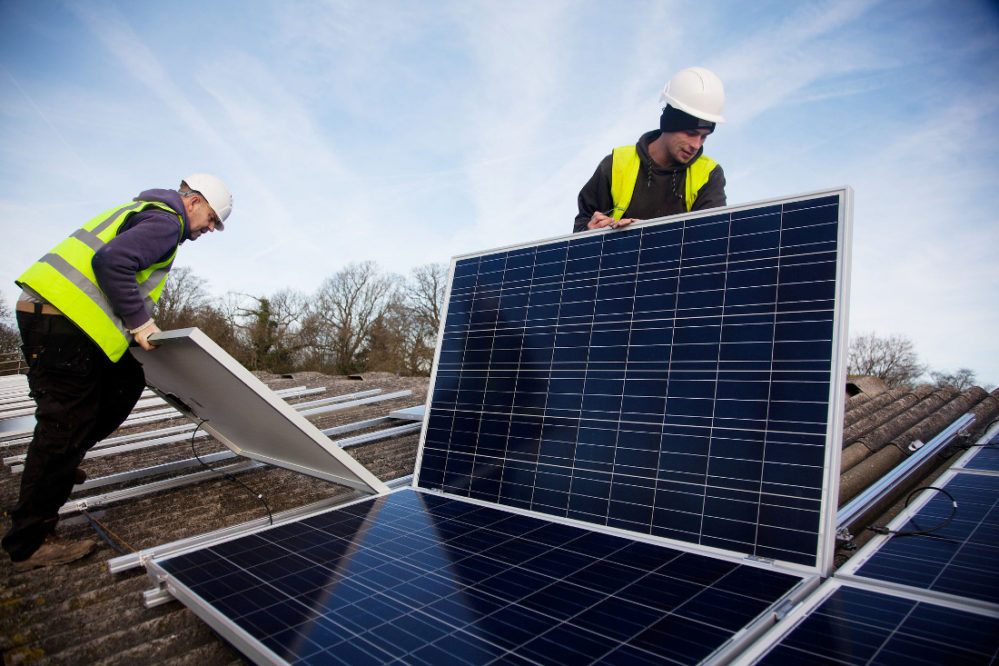 Correction: An earlier version of this story said that We Energies’ EEI dues were charged largely to ratepayers in 2015. That is not the case; We Energies EEI dues were paid entirely by shareholders.

A recent story in the New York Times raised new attention to the role of the Edison Electric Institute in pushing policies hostile to distributed solar.

Not mentioned in that article, however, is that ratepayers are a significant source of funding for this industry trade association. Utilities pay dues to the Edison Electric Institute (EEI) in large part with funds collected from customers’ energy bills.

A study released in May by the Energy Policy Institute, a watchdog group, detailed how EEI pushes for policies that are widely considered to curb the growth of distributed solar energy.

The Energy Policy Institute features excerpts from EEI’s reports and communications with its member investor-owned utilities on issues including how utilities deal with rooftop solar in their service territories, and the nationwide debate over our shifting energy landscape.

It notes that “documents handed out at the 2016 annual EEI CEO meeting revealed some of the specifics of what the trade association tells its members it has achieved in 2015 and its goals for 2016. The objectives include reforming electric rates and advocacy for increased fixed and demand charges, while other priorities deal with EPA regulations, tax issues, litigation efforts, and outreach activities to ‘minority and community organizations.’”

Increased fixed charges and demand charges have been proposed by numerous utilities nationwide in response to what they describe as threats to their revenue model from distributed solar. And utilities or groups working on their behalf have frequently targeted minority and community organizations with the message that distributed solar is accessible only to wealthier people who aren’t paying their fair share to keep up the grid.

The Energy Policy Institute report includes specific examples of EEI presentations to utility CEOs and reports going back to at least 2012 wherein these strategies were promoted and discussed.

“EEI’s activities have had a significant impact on distributed generation and the trade association will continue to have an impact on this debate and the future of the solar industry,” said Energy Policy Institute research director Matt Kasper, lead author of the report. “We’ve seen the trade association use its influence and money to speak at industry events to target state regulators and consumer advocates and lawmakers. It funded third parties to push its priorities on this topic. It wrote model legislation at ALEC. It funded reports to back up its position for member utilities to use. It also hired a crisis communication firm to help re-frame the debate and change the vocabulary. It even passed along letters for politicians to submit as their own to federal agencies.”

The Energy Policy Institute notes that the EEI’s 990 forms filed with the IRS for 2015 show that about $75 million out of its $90 million budget came from utility membership dues, much of this coming directly from ratepayers.

Ratepayer funds going to EEI must be approved by state utility commissions. EEI activities explicitly labeled as political or lobbying are charged to utility shareholders and do not need commission approval.

From the mid-1980s through the early 2000s, the National Association of Regulatory Utility Commissioners questioned and audited the EEI’s expenditures in response to advocates’ concerns that the EEI’s work was not in the interest of ratepayers.

Last year, the Missouri Public Service Commission argued that Ameren Missouri should not be able to bill its EEI dues to ratepayers unless it could prove that the trade group membership sufficiently benefited ratepayers. PSC auditor Jason Kunst said in testimony that “staff believes that while there may be some benefit to ratepayers, the membership appears to primarily benefit the Company [Ameren] and its shareholders.”

In the 1980s, the Wisconsin Public Service Commission took a hard look at EEI and other industry group funding, as Kasper sees it. A 1985 memo from the commission said that only 50 percent of EEI dues and dues to EEI-affiliated groups should be billed to ratepayers. The state’s Public Service Commission under Governor Scott Walker has been known for its close ties with utilities proposing policies hostile to distributed solar. Nonetheless, Kasper said he hopes the commission looks closely at the funding EEI currently gets from Wisconsin ratepayers.

Kasper said that in digging through commission dockets and sending information requests to Midwestern utilities, he was often not able to get detailed information about how much money was being sent to the EEI and what that money was used for.

“Since these costs are passed on to customers, intervenors such as consumer groups and attorneys general should file for discovery and ask for these materials in future rate cases to see how these activities benefit the ratepayers,” he said.

The Wisconsin Public Service Commission did not respond to a request for comment on EEI dues recovery.

EEI is not alone

It is actually standard for utilities to bill ratepayers and shareholders for funds passed on to energy and business trade associations, including ones that lobby against environmental protections or the interests of clean energy.

Kasper pointed to dues from Midwestern utilities going to the U.S. Chamber of Commerce, the American Gas Association, the Institute of Nuclear Operations, the Utility Water Act Group, the Utility Solid Waste Activities Group  and the Utility Air Regulatory Group. These “U groups” are hired by industry to litigate environmental regulations, as in the UARG’s lawsuit challenging the EPA’s ability to regulate greenhouse gases.

Among various itemized examples, Kasper noted that Louisville Gas & Electric gave more than $37,000 to the American Coalition for Clean Coal Electricity and a total of about $42,000 to UWAG and USWAG, as noted in a 2015 filing. And Wisconsin Electric Power (We Energies’ parent company) gave hundreds of thousands of dollars to the American Gas Association, which pushes for natural gas to be defined as a clean energy source under renewable portfolio standards.

Powerful and well-funded trade associations have played and continue to play a major role in the debate over how our country responds to climate change. While some of the trade groups explicitly represent the interests of fossil fuel generation, clean energy advocates are frustrated that the EEI, representing utilities, also seems to favor fossil fuels over clean energy. And EEI chairman Thomas Fanning has denied the scientific consensus that CO2 released by human activity is a primary contributor to climate change.

The Energy Policy Institute report notes that EEI president Thomas Kuhn “made $4.1 million in 2015, up from $1.2 million in 2004, and is ranked among the nation’s highest paid industry association executives.”

“I know that most ratepayers don’t know what EEI is,” Kasper said. “But ratepayers – no matter their political leanings – would be furious to know that they help fund an out-of-state trade association whose president makes $4 million a year and senior staff make hundreds of thousands, and that has been significantly involved in helping power companies weaken protections for clean air and water, and helping power companies fight rooftop solar.”