Photo By
Richard Sitler / The Southern via AP 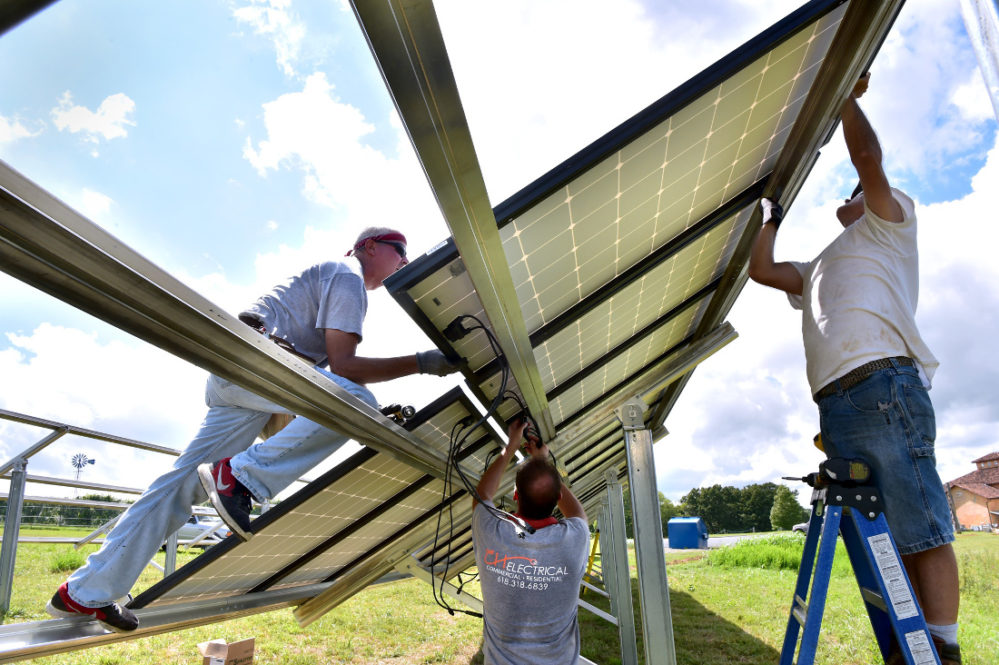 Richard Sitler / The Southern via AP

Workers from CH Electrical install solar panels at a vineyard in Makanda, Illinois in 2016.

After months of negotiations and surviving a contentious budget battle in the state legislature, the hard work of enacting Illinois’ comprehensive energy bill is underway.

The Future Energy Jobs Act calls for the installation of about 2,700 MW of solar in Illinois by 2030, a dramatic increase from the state’s current 75 MW.

“It’s going to be crazy, and it’s going to be really exciting,”said Lesley McCain, executive director of the Illinois Solar Energy Association. “We’ve seen such interest from around the country, from all types of developers focused on helping get this legislation built out correctly.”

About 40 percent of the new solar is to be utility-scale projects over 2 megawatts, about 50 percent is to be distributed and community solar, and two percent is to be on brownfields, with the remaining 8 percent left up to state officials’ discretion.

The state will deal with utility-scale solar much as it has in the past — through procurements carried out by the Illinois Power Agency (IPA). The 1,300 MW of new distributed solar will be the big challenge. That includes small projects under 10 kilowatts and large projects between 10kw and 2 MW. Under the new law, distributed solar and community solar will be incentivized through SRECs, or Solar Renewable Energy Credits, with the price set through an adjustable block program similar to ones in New York and California.

The Illinois Power Agency and the Illinois Commerce Commission are in charge of setting the price of these SRECs. The price must be high enough to motivate enough entities to install solar. The cost of the SRECs will ultimately be picked up by ratepayers, and a long-standing cap mandates that compliance with the RPS cannot cause rates to rise by more than two percent.

“The key will be finding a price that will drive installations while not being so high it causes a boom-bust cycle similar to the effect seen in Massachusetts and New Jersey,” said Lisa Albrecht, vice president of the Illinois Solar Energy Association and a sales specialist at Solar Service.

“They [the IPA] can adjust prices rapidly depending how the market responds, they’ll be watching to see how rapidly developers are using up those RECs and adjust up or down accordingly.”

She added that “smaller systems will likely have higher prices for RECs because they don’t have the same economies of scale. If you only have 10 kilowatts, you would need a higher-priced REC than a 1,000-kilowatt” system.

The IPA has been seeking input from experts and stakeholders, who say they are pleased with the process.

“We’re definitely seeing confidence that those prices will get set at a level that solar can be doable — that the companies will be able to sell their product,” said MeLena Hessel, clean energy and sustainable business policy advocate for the Environmental Law & Policy Center. “Built into the legislation is the ability to tinker with the pricing if it looks like it’s not set perfectly. There’s a lot of good thought and analysis going into getting it right.”

Albrecht said that small installers like her company will find it much easier to work with customers under the new system.

“In the past it was you may or may not get a rebate, there’s one day in October where you may get your money,” she said. “With the new program it will be so much easier. I can see what price [SREC] is available and I can pencil that out for homeowners right when they call.”

In past Illinois procurements for distributed solar, companies that serve as aggregators have bundled small solar installations together and collected SRECs for them, passing the revenue back to the solar developer or owner in some form. Aggregators will also likely be involved in SREC distribution under the new law, though the way it plays out remains to be seen. Experts say that solar developers are likely to get the payments from SRECs, and pass those incentives on through lower costs to the entities who are buying or leasing the solar installations.

Under an adjustable block program, the price of SRECs typically goes down over time as the price of solar hardware and the cost of installation decreases.

“Early adopters should get the better SREC price, and over time that declines,” said McCain. “As the equipment as well as soft costs continue to decline, you don’t need as big an incentive. That has proven out well in other markets, so we expect to see that same trajectory here in Illinois.”

Before the law was passed, the state’s Renewable Portfolio Standard — which had a solar carveout — could be fulfilled with the purchase of renewable energy credits from other states. Critics argued that this meant few new renewable energy installations were being built, since the RPS could theoretically be fulfilled with credits from wind farms in Texas or other pre-existing and remote installations.

The new law allows for the purchase of RECs from neighboring states, but only if the purchase meets Illinois-centric criteria including that it improves the state’s air quality.

The group Environmental Defenders of McHenry County in northern Illinois is among those who hope the SRECs will make a community solar installation financially viable. Members want to do community solar on an 8-acre site where they envision solar panels surrounded by native prairie plants attracting pollinators. They are in talks with ComEd about getting the site approved, and then they will issue an RFP for developers.

Board president Nancy Schietzelt said that if the organization is able to buy its own shares in the community solar installation, it could help them become carbon neutral.

“The biggest desire of most people I talk to is to cut their electric usage and their reliance on fossil fuels,” Schietzelt said. “This is an exciting project for us.”

The law creates a program called Illinois Solar for All that makes funds available each year to incentivize solar installations in low-income and environmental justice communities — those that have historically been most impacted by pollution including fossil fuel generation. Anyone in Illinois at or below 80 percent of area median income would qualify for incentives, and advocates hope to see solar blossom in struggling rural Illinois towns along with urban communities.

Experts involved in the bill negotiations said it is likely SRECs being used in low-income and environmental justice communities would be worth more money than the standard SRECs. That will help make solar more affordable and cover the additional costs often involved in lower-income communities, like improving unstable roofs or archaic electric systems, and recruiting and gaining the trust of individuals and organizations who are not familiar with solar.

The law also calls for solar job training programs and jobs specifically targeting people in these communities, with special provisions for alumni of the state’s foster care system and people leaving the criminal justice system.

For job training and apprenticeship programs, the law calls for money to be disbursed in each of the years 2017, 2021 and 2025. Each of the disbursements will be $10 million, with $3 million going to training programs run by the IBEW labor union, $4 million to programs administered by specific organizations including the Chicago Urban League that are not named but are essentially identified in the legislation, and $3 million distributed to organizations through a competitive process. The utility ComEd will oversee job training under the law.

The law says that solar projects falling under the low-income/environmental justice category should include a job training component if possible, meaning a developer collecting the higher value SRECs or other incentives for installing solar in such communities should train and/or hire people from the targeted backgrounds.

Solar for All will be paid for by money collected as part of the Renewable Portfolio Standard and largely by the Renewable Energy Resources Fund (RERF) — a pot of money that was nearly swept into the state’s general budget. The RERF consists of money put in over years by Alternative Retail Electric Suppliers, which under the previous RPS system paid into the fund in lieu of meeting the renewable energy portfolio requirements imposed on utilities.

Under the newly structured RPS, alternative retail suppliers will not be making payments into the renewable energy fund. It seems unclear how the Solar for All Program will be fully funded once the RERF funds have been used up. But advocates said there is enough money in the fund right now — about $175 million, though some of that is already dedicated to other uses — to create a robust low-income solar program for the near future.

Pino noted that the funds remaining in the RERF are still at risk of being swept during future budgets.

“It’s up to the IPA in terms of how much money they get out the door and when,” she said. “There are some advantages to getting more out earlier since the RERF is vulnerable to sweeps as long as it sits in the state account.”

Pino said that LVEJO is currently working with residents to identify potential sites for a local community solar installation, and she said there is much enthusiasm for solar in general among residents who became focused on energy issues during the decade-long struggle to close the nearby coal-fired power plants.

“Little Village is a community deeply and adversely affected by the energy system historically,” Pino said. “Community members really said what we want is choice and agency, we want to be able to address our own energy future, to have things we had not had access to in the past. There are folks interested in seeing a community solar project here, and also people interested in seeing real family-sustaining job opportunities.

“Across all these categories, the umbrella is that theme of community control, community energy sovereignty and a just energy transition.”