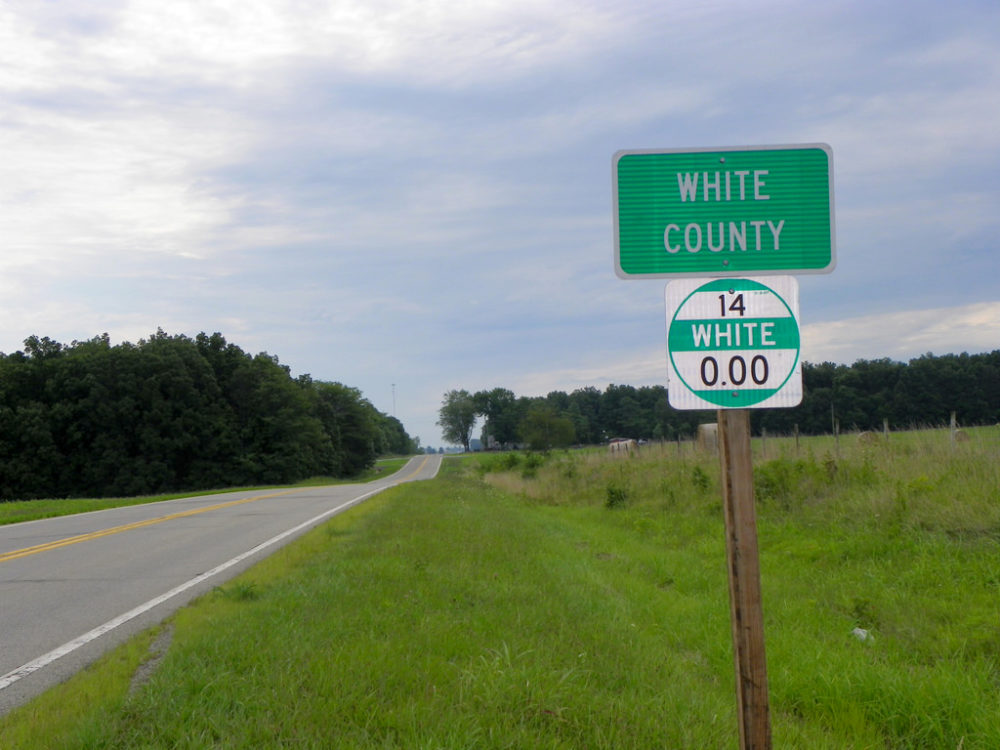 A site in White County, Illinois is named in a new fracking permit that advocates say is incomplete.

Leading up to the law’s passage, companies had secured hundreds of leases to potentially frack in Southern Illinois.

But then oil prices dropped, and the eagerness to tap the state’s New Albany Shale faded.

This summer, the filing for the first permit under the new rules has reignited debate over fracking in Illinois and concerns over the law’s ability to protect citizens and the environment. Environmental and citizen groups say that this permit will be a test case as to how rigorously the Illinois Department of Natural Resources (IDNR) will seek to enforce the law.

In the spring, the Kansas-based, family-owned company Woolsey Energy filed for a permit to frack in White County in southeastern Illinois. Advocates criticized that permit as incomplete and inconsistent, and the department sent Woolsey back to the drawing board.

Woolsey submitted a revised permit application this summer, with the public comment period closing this month. Environmental advocates say the revised permit is still sorely lacking required information, and they are urging the IDNR to reject it.

“The company still did not provide the required information, putting public health and safety, groundwater, topsoil and other resources at potential risk,” said Karen Hobbs, senior policy analyst for the water program of the Natural Resources Defense Council’s Midwest office. “How IDNR handles this application will set the benchmark for the program’s future and ultimately determine if it is successful.”

The Illinois law was hailed as among the nation’s strictest when it passed, though some local groups opposed it and instead demanded a ban on fracking.

“We don’t want to see the door opened to fracking in the state,” said Illinois People’s Action environmental organizer Dawn Dannenbring. “The law is not strong enough to protect Illinoisans from the dangers of fracking. One of the biggest problems is because of the way the law was set up, if all the I’s are dotted and T’s are crossed, then the IDNR has to issue the permit.”

But Dannenbring and other groups say the I’s and T’s are far from dotted and crossed in Woolsey’s permit application, which “does not follow the letter or the spirit of the law,” as Dannenbring put it.

She feels the company intentionally submitted a “shoddy permit” with the expectation that environmental groups would “bring up issues one at a time” and then the IDNR would essentially walk the company through addressing them. “That’s a waste of time and taxpayer money,” Dannenbring said. “The IDNR exists to protect us, not to serve Woolsey.”

Critics say the law is only as good as the IDNR’s willingness to enforce it by denying permit applications that don’t meet its requirements, and they don’t think companies should be given multiple second chances to submit a permit.

“We will find out what kind of IDNR we have,” said Stephen Nickels, who lives in Johnson County, Illinois, where he said companies had previously acquired 199 leases for fracking. “Is it looking out for the people of Illinois, or for the profits of an individual from Kansas?”

Mark Sooter, Woolsey vice president of business development, declined to respond to specific concerns or criticisms from opponents. The IDNR did not respond to a request for comment.

Among other things, critics say Woolsey’s proposed permit lacks a sufficient plan to deal with the toxic flowback water that comes from fracking, an explanation of how flowback volume was calculated, specific details on where fracking will occur and an explanation of chemicals that will be used.

The law allows companies to invoke trade secrets in withholding information about chemicals used in fracking. Woolsey’s permit says the trade secrets exemption will not be invoked, but then lists trade secrets as a reason not to reveal the chemical makeup of some components, without explaining why trade secrets apply in those cases.

Critics also note that Woolsey proposes to use significantly more water than the amount normally considered necessary for fracking, and the company offers no plans to reduce water use or recycle water.

“Woolsey proposes to use 7.5 million gallons of local groundwater in its treatment operation versus the most commonly reliable figure of 4.4 million to 5 million gallons per well,” said Hobbs. “The company gives no justification for this exceptionally large use of groundwater, asking the state and residents to trust that it is not in its interest to overuse water.”

Hobbs’ public comment also pointed out that Woolsey describes a certain area as both the target of fracking and the “frac barrier” that is supposed to prevent the flow of polluted groundwater.

“The company says the frac barrier and the production zone will serve both functions, which is impossible,” she said. “It’s another indication of how poorly written and incomplete the application is.”

Opponents also say the permit does not include adequate information about the risk of earthquakes in the area, including from the nearby Wabash Valley fault.

Nickels and his wife live on her family’s farm about 50 miles from the area covered by Woolsey’s permit. Nickels, who previously owned a stock trading company in the Chicago area, noted that their homeowners’ insurance policy does not cover earthquakes caused by humans.

In public comments filed with the IDNR, Nickels said Woolsey’s permit should be denied under a section of the fracking law that says the state can suspend, revoke or refuse to issue permits to companies demonstrating “untrustworthiness” and “incompetence.”

He thinks the terms describe Woolsey. He cited reports that in Kansas, Woolsey injected diesel oil for fracking without obtaining a permit that is required because of the health risks posed by that method. The Topeka Capital Journal quoted company president Wayne Woolsey denying they used diesel to frack, saying they used only water, sand and a “friction inhibitor.” The paper quoted Woolsey saying, “If you took the sand out, you could drink that stuff.”

Nickels also pointed to a blow-out at a Woolsey drilling operation in Wayne County, Illinois on January 27, 2014 that resulted in a violation notice from the Illinois EPA and reportedly injured two workers.

“Integrity is like virginity, you can only lose it once,” Nickels said. “If they can’t file a reasonable permit for the very first fracking permit in Illinois, then they are untrustworthy and incompetent and the permit should be denied. If they can’t file an adequate permit, how can we trust them to do fracking without injuring their workers or harming the environment?”

The only other company to file a permit application in the wake of the law’s passage withdrew their application, and it still seems far from certain that Woolsey or any other company will really want to start fracking in Illinois.

Fracking can be used to capture natural gas or oil from shale formations that don’t yield the fossil fuel under traditional drilling methods. Illinois’ New Albany Shale would be tapped for oil, which seemed highly attractive in 2008 when oil prices were over $150 a barrel, and even in early 2014 at over $100 per barrel. Today, prices hover in the mid-$40s per barrel.

Sooter said Woolsey needs this permit to be able to explore the financial potential of fracking the New Albany Shale, and depending on the results they will decide whether to seek to frack more widely. He said the requirements of the state law will make the bar higher for deciding whether to proceed.

“It is much more time-consuming and much more costly than the state we’ve historically worked in, which is Kansas, where you can get a horizontal [fracking] permit in less than a week,” Sooter said.

“We had a learning curve we had to go through [in Illinois], so it’s taken an exorbitant amount of time. That’s one of the reasons other companies have decided not to pursue a well in Illinois under the fracking regulations — because of the difficult nature of it. Our opinion was that we hopefully can learn how to deal with the permit process, and if the reserves are there and it’s economic enough, we will get through the permit process.”