Photo By
Missouri University of Science and Technology 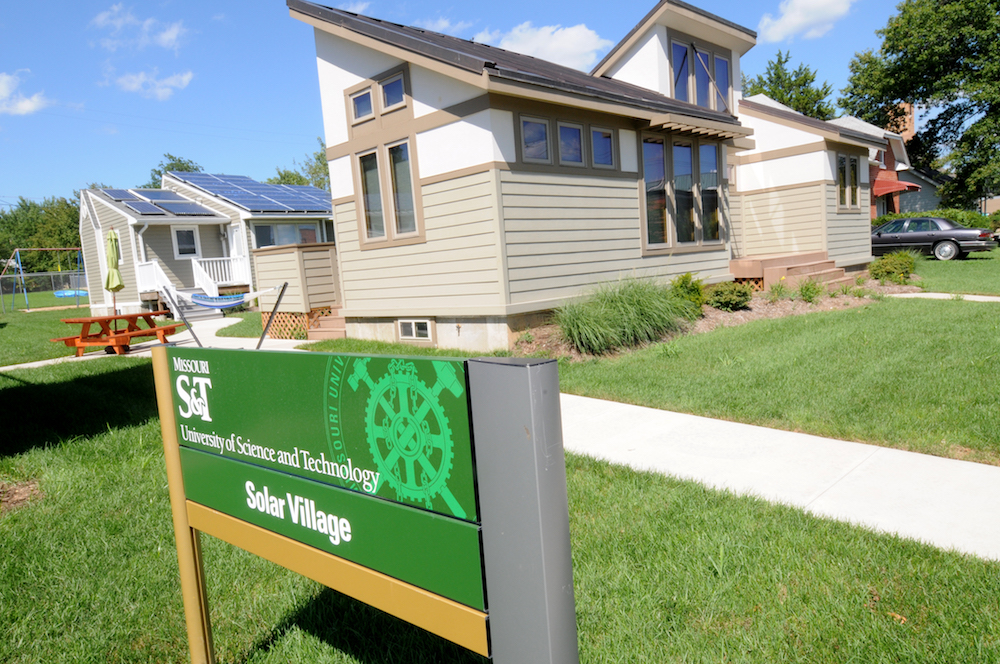 Missouri University of Science and Technology

Researchers will study the energy use of occupants at Missouri University of Science and Technology’s Solar Village.

In times of limited power availability, even today’s smartest appliances may not be clever enough. However, a team of Midwestern researchers is hoping to devise a way to better align automated home energy management systems with what their users really want.

Home energy management systems generally use past behavior to develop algorithms aimed at minimizing energy used to run electrical appliances and heating and cooling systems, said Denise Baker, an assistant professor of psychological science at the Missouri University of Science and Technology and one of the project’s lead researchers.

However, she said that in the future — especially one that is potentially energy-constrained — past habits may not be the best indicator of when machines should be turned on or off.

“We want to take into account well-being, or goals that the user has,” Baker said. “There’s this notion of well being, or prioritizing things.”

After returning home from work, just because someone immediately heads for the light switches and the TV remote does not necessarily mean that those would be the highest priorities if only a limited amount of power was available, Baker explained. It might turn out that, in an environment of limited electricity, someone would consider a phone charger or computer to be more critical.

“When you look back at usage data, there are things like lights and TV that are used a lot,” Baker said. “But when you ask people, ‘What’s most important to you?’, lights and TV barely make the list.”

In fact, when the research team — which is being supported by a federal grant — recently surveyed 1,500 people across the country, the top-ranking electrical appliances were computer, cell phone, air conditioner and refrigerator, according to Simone Silvestri, the study’s other lead researcher. Silvestri is an assistant professor of computer science at the University of Kentucky, having recently relocated there from the Missouri University of Science and Technology.

The researchers are planning a second survey that will be aimed at refining their understanding of just how important various appliances are. For example, Baker said they will ask which appliances would be worth repairing when out of service, and how much people would be willing to pay.

Silvestri and Baker are trying to devise ways to program automatic energy management systems to make them better reflect the needs and desires of users. Appliances that are frequently used actually are not necessarily the appliances that would be most critical in a time of limited access to energy, according to Baker.

They hope that feedback from the second survey will help them to assign the appropriate weight, or importance, to various appliances. It’s telling, she said, that people use energy management systems primarily to monitor — not manage — energy use.

“If you want a system that’s going to save energy, people have to use it. For them to want to use it, it has to seem smart,” she said. “They have to see it as usable.” The researchers are aiming to make these energy management systems more intuitive, so users don’t feel a need to constantly override what the system is programmed to do.

In addition to conducting nationwide surveys, the research team this year is gathering information from a small solar-powered housing development at the Missouri University of Science and Technology, known as Solar Village.

About 30 people live in nine units there, and have agreed to be part of this experiment. Based on the usage data it gathers from that small group, the research team will develop a simulation game with the idea of testing an energy management regimen for the residents. The idea will be to control the off and on switches, meeting the needs of the residents while keeping energy use to a minimum.

The final phase of the three-year research project will entail going live with an energy mangement protocol. The research team will take control of energy use at Solar Village, but will attempt to do so in a way that works for the residents.

Although most of the appliances at Solar Village are not “smart”, many of the outlets are. Zachary Bahr, a member of the research team and a junior majoring in computer science, designed a “smart outlet” that records how much power is going to a connected appliance, and when. It also can be remotely controlled. There are about 10 of them in each unit.

The research team will use them to operate the appliances in a way that, they hope, will satisfy the residents.

“Ultimately,” Baker said, “we want happy users to save energy.”