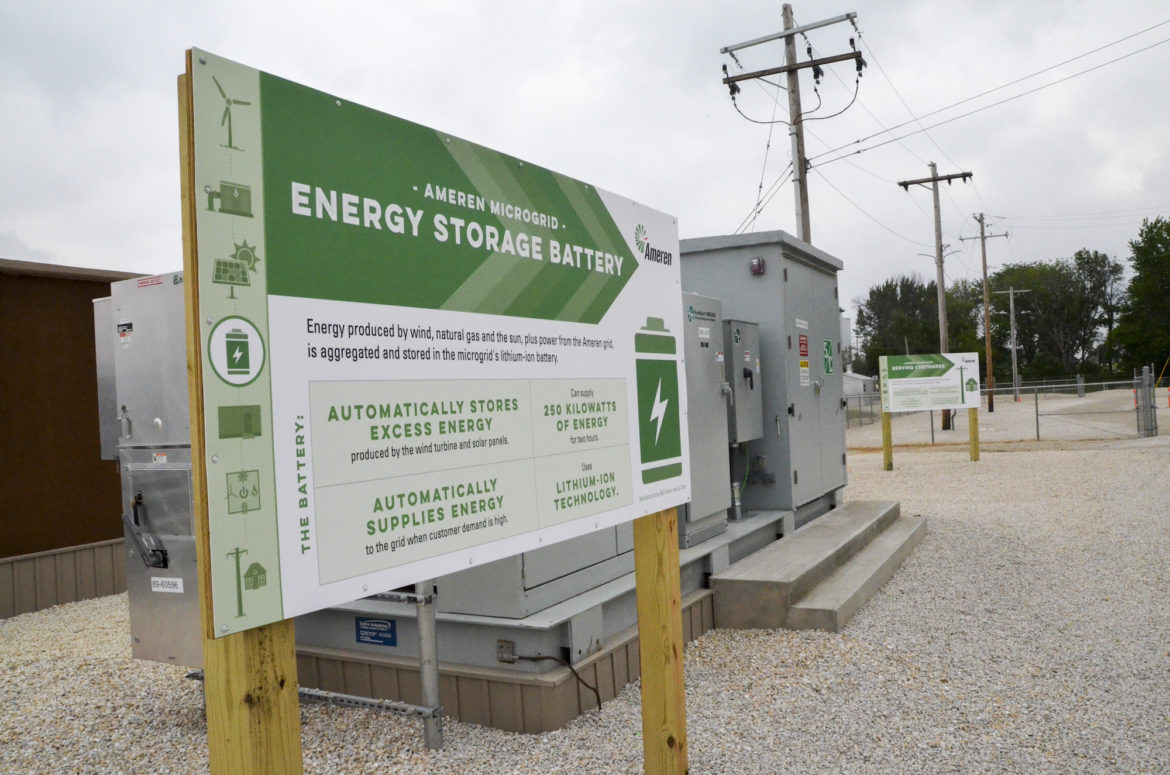 Ameren partnered with S&C Electric to successfully test a microgrid in Illinois for 24 hours using wind, solar and battery storage.

A Midwest utility has taken a critical step closer toward a distributed, decentralized power grid.

“Islanding” refers to a microgrid — itself a network of power generation and consumption — temporarily disconnecting itself from the broader, regional power grid. Many analysts believe the power grid of the future will consist of these kinds of localized, networked microgrids over the centralized “hub-and-spoke” model that has existed for over a century. The ability to island is seen as a core function of microgrids.

Ameren’s test, although limited in scale, offers a glimpse into the utility of the future. The microgrid is one of the few in the world to operate at utility-scale voltages — between 4 kilovolts and 34.5 kilovolts

“This successful test provided tangible proof that the system can accomplish what it was designed to do,” Ron Pate, senior vice president of operations and technical services at Ameren Illinois, said in a press release. “The microgrid isn’t theoretical and our tests don’t need to be lab simulations. We were able to prove that this technology works and can provide key benefits to our customers.”

Ameren’s microgrid lies adjacent to the campus of University of Illinois Urbana-Champaign and consists of a 100-kilowatt (kW) wind turbine, a 125-kW solar array, a 250-kW battery and two 500-kW natural gas generators. While the entire system is capable of supplying regular Ameren customers, this month’s islanding test focused on the 50-kW segment of the microgrid that serves an onsite Ameren-owned research facility.

Notably, the microgrid was able to complete the 24-hour test without relying on fossil-fuel generation, making it a 100 percent-renewable islanding event.

A chart released by S&C Electric visualizes how wind, solar and battery storage worked in concert to meet the research facility’s energy demands throughout the 24-hour period.

The test began at 8 a.m. with a 97 percent charge on the battery. For about two hours, the microgrid ran on stored energy alone. Once the battery levels hit 90 percent at around 10 a.m., the system automatically dispatched its wind turbine and solar array. The renewable assets took over powering the load while using excess energy to recharge the partially depleted battery.

In less than an hour, the battery returned to a 97 percent charge, enabling the system to dial down the wind and solar and resume running on stored energy alone. This cycling pattern continued, according to S&C’s data, until about 7 p.m. With the sun setting, the system switched off the solar inverter, leaving only the wind turbine to carry the load through the night.

Strong winds kept the microgrid powered throughout the night — keeping battery levels relatively stable — and even storing charge when wind speeds peaked. S&C Electric’s PureWave SMS-250 Storage Management System helped ensure voltage remained stable throughout the process. Starting at about 7 a.m. the next day, a rising sun brought solar back online until the test’s completion at 8 a.m., reconnecting to the grid without a hitch.

Throughout it all, the battery’s state of charge never dropped below 88 percent, according to S&C. What’s more, the system’s automated control system managed these shifts along the way, without the need for human controllers to make adjustments. There’s still a long way to go before utilities are relying on microgrids to power whole cities or even neighborhoods, but the test shows how wind, energy, storage and automated, intelligent controls can complement one another in an effort to deliver local, consistent, reliable, 100 percent renewable power.

“This system is designed to be completely automated,” says Chris Evanich, S&C’s applications director of microgrids. The storage management system decides which generation sources to use and when they should go offline if they’re not needed, all to “keep everything balanced and up and running so that the customer doesn’t even realize they’re running on 100 percent renewables.”

A hub for microgrid development

Illinois is becoming something of a hub for microgrid innovation. The Illinois Institute of Technology, a private research university on Chicago’s South Side, was an early pioneer in the technology, launching an $18.5 million plan in 2008 to build “the world’s first self-healing and efficient smart microgrid distribution system.” Today, the university manages an islandable, 9-megawatt network of gas turbines, large-scale batteries, a wind turbine and various smart-efficiency technologies.

ComEd, Illinois’ largest utility, is planning to develop its own microgrid in Chicago’s Bronzeville neighborhood, adjacent and connected to the Institute of Technology. The utility has received more than $5 million in grants from the U.S. Department of Energy to help complete the microgrid. ComEd says the project would be the “most advanced clustered urban microgrid in the United States,” providing the neighborhood with an added layer of reliability, cybersecurity and resiliency in the face of broader grid disruptions.

Late last month, ComEd submitted its official proposal for the cluster to the Illinois Commerce Commission, which must approve the plan.

“The electric industry in Illinois, and around the world, is changing rapidly,” wrote Joseph Svachula, ComEd’s vice president of smart grid and technology in testimony to the Illinois Commerce Commission. “This ‘clustering’ of microgrids is an important step in the journey to a more decentralized grid because it enables us to understand how microgrids interface, and how resources from neighboring microgrids can be used to keep power flowing to customers.”