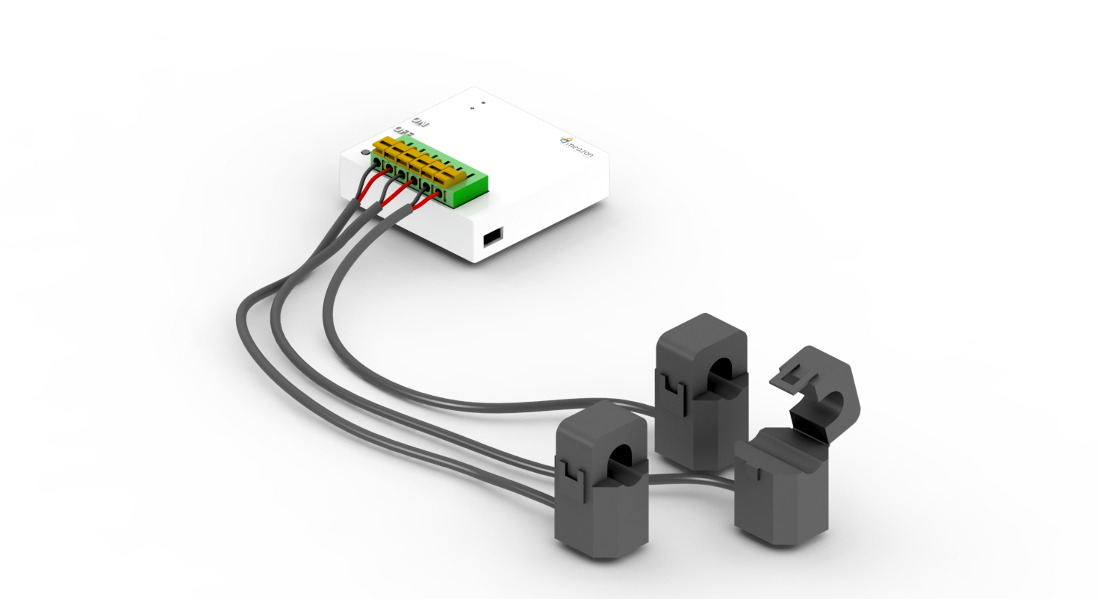 This clamp is part of a system developed by Meazon that can monitor electricity use on individual devices.

Monitoring electricity use to drive energy efficiency is not a new concept, but as the technology for doing so has rapidly advanced, cost has remained a barrier to widespread adoption.

However, a Greek startup that settled into a business incubator in Michigan last year to grow in the U.S. market may have broken that cost barrier, advocates say.

The technology, known as submetering, offers users a precise account of energy used in spaces or even devices (as opposed to just metering an entire home or building) and has vast potential in the market to drive energy efficiency.

Meazon, the company whose technology won the U.S. Department of Energy’s Wireless Submetering Challenge earlier this year, operates in this established clean tech field of energy monitoring. But its product is geared toward widespread adoption for one main reason, and why it caught the DOE’s attention: It’s less than $100.

John Gionas, one of the co-founders of Meazon, which started its U.S. operations last year at Oakland University’s incubator space near Detroit, said the DOE challenge helped bring the company to the United States.

Meazon started building its portfolio of products in 2010. By 2015, the company had decided to participate in the DOE challenge as a way to prove its product because the federal agency is a “very influential player in the U.S. market,” Gionas said. The company has plans to expand soon in San Francisco if it receives a second round of financing, he added.

Gionas says the company’s beginnings were the confluence of the latest technology in telecommunications and clean energy.

“Basically our thought was, as the Internet of Things is starting to grow, there is the need to monitor almost everything,” Gionas said. “Up until now, the electricity metering market gave us the capability to measure the consumption of a home or a building, but you’d never know what’s going on inside. … It’s a solution that really takes advantage of the technological advancement up until now in various fields.”

Gionas describes the submeters as small, fuse-like controllers that measure energy use every second that power is consumed. That data is transmitted to a gateway every five minutes, which transmits it to the cloud every 15 minutes or a half hour. From there, the company has an app where customers can monitor consumption in near-real-time. The app also allows customers to build visualizations “in ways that are useful,” Gionas said.

This submeter technology effectively goes far beyond what utility smart meters can show for customers, but Gionas says the two are complementary.

“For end users like homes, maybe one utility meter is enough to know overall how you consume energy,” he said. “On the other hand, as things get more complicated like having more energy-consuming devices, multi-family buildings or commercial buildings with many loads, then there is a need to go deeper on that. You need more analysis.”

Meazon typically works with energy services companies and facilities managers. “Smart cities” are also another application, or places that build wireless technology into infrastructure. He says most uses are for existing building stock, and the devices have been installed across the world, mostly in Europe.

But generally, Gionas says the market for such precise energy monitoring is “huge.”

“Imagine how many electric loads are out there in the world,” he said. “You can see it everywhere.”

While the applications for such monitoring may be broad, advanced-energy experts say the limiting factor has been cost, which at this point sets Meazon apart.

“They’re one of these small companies that fly below the radar and then win the DOE challenge as the only company around to introduce a submeter into the market at less than $100,” said Dan Scripps, senior advisor with the Michigan Energy Innovation Business Council. “That’s really the tipping point to this becoming mainstream: reaching a price point where it’s really attractive to building owners.”

“It’s not cheap and it’s not something you can immediately get a (return on investment) on,” she said. “Submetering is very valuable but it’s something that’s easy to cut from a budget because there’s no quantifiable, immediate ROI you can put next to it.”

Gionas added: “In a sense, the DOE saying using new technologies in a wireless manner with cost-efficient meters — this is a new market. In my opinion, it is in its infancy.”

“One of the frustrations some have had in smart meter deployment is that it’s great in terms of saving costs involved with (not needing) utility meter readers, but beyond that some customers are frustrated with not seeing broader consumer benefits,” Scripps said. “What’s exciting about the introduction of submeters into the mainstream is you can get even more granular.”

Scripps said widespread adoption could also lead to policy and regulation questions that have yet to surface in places like Michigan.

While submeters in multi-family, multi-tenant buildings may help address split-incentive issues in determining who pays for energy improvements (landlords or tenants), submeters are also used by property owners to charge tenants for electricity when the landlord is directly paying the utility. This raises a question of whether the property owners, or companies working on their behalf, are then acting as a utility.

This has been an ongoing policy question in Ohio, where a 2013 investigation by the Columbus Dispatch found occupants in buildings with submeters were paying as much as 40 percent more than customers who paid utilities directly.

“There’s a big difference between a commercial building owner and an energy marketer,” Scripps said. “But particularly as submetering technology gets to this price point, it’s likely to become a much bigger issue.”