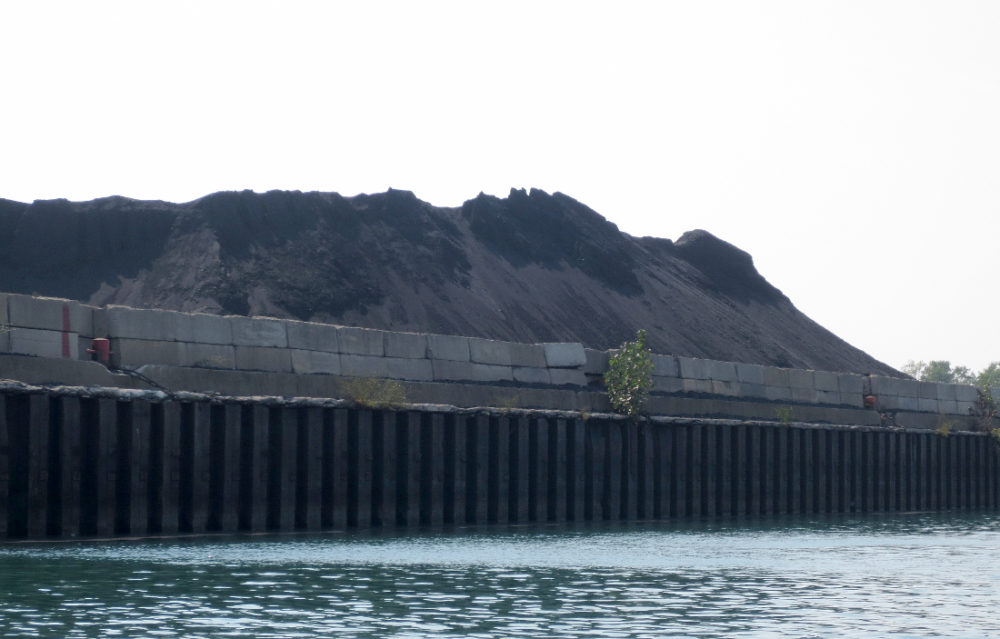 Piles of petroleum coke along the Calumet River in Chicago in 2013.

Advocates concerned about pollution from petroleum coke are worried an Ohio professor’s study downplaying the risks will gain new prominence now that he has been named to a key EPA post.

Dourson was also hired by Koch Industries to study the health impacts of petroleum coke (petcoke) in Chicago, with his research starting soon after residents began raising concerns about the piles of petcoke quickly growing at Koch subsidiary KCBX Terminals on the city’s Southeast Side.

The study, funded by Koch Industries and carried out by Dourson and two other scientists paid by Koch, found no risk of adverse health impacts from exposure to petcoke in the air or on surfaces in neighborhoods around KCBX’s two petcoke transfer and storage facilities.

One of those has since been closed, and the other one was forced by a city ordinance, following intense community pressure, to stop storing petcoke in the open. But residents are still concerned about petcoke escaping into the air and the Calumet River during the transfer process between barges and trains.

And as they also fight other environmental battles, including around manganese contamination from a facility next to KCBX, Dourson’s role in the petcoke battle underscores the odds residents are up against when fighting big business, especially with such an industry-friendly administration in the White House.

“I’m not surprised that this person is being promoted. We’ve seen it happen on the national scale, we also see it on the local level,” said Olga Bautista, a leader of the Southeast Side Coalition to Ban Petcoke.

“When you fall in line with these industries and people of power, you get rewarded and put in positions that have a lot of influence. And the people who are actually suffering from the pollution have very little recourse. They’re calling the shots and deciding what is deemed dangerous and what is not deemed dangerous. When we try to speak for ourselves and defend ourselves, they say we are not experts.”

KCBX spokesman Jake Reint provided a statement about Dourson’s work for the company, saying: “Dr. Dourson was one of several experts KCBX retained to make sure our bulk material terminals in Chicago were operating in compliance with all rules and regulations, and with respect for the environment and our neighbors. This work included analysis of several years of air monitoring data and tests on more than 100 soil and surface samples collected from the neighborhoods near the KCBX terminals.”

Science in the service of industry

The Environmental Defense Fund and Greenpeace USA are among the groups raising alarms about Dourson’s ties to industry and urging Congress not to confirm his nomination when hearings are convened.

Richard Denison, lead senior scientist for EDF, wrote in a blog post about Dourson’s “extensive, longstanding financial ties to the chemical industry – an industry that, if he is confirmed, he will be in charge of regulating. And not only does Dourson have these financial ties to the industry, he has made a career of helping industry play down concerns about chemicals.”

Denison said that a review of Dourson’s published papers between 2005 and 2017 showed half of those where funding sources were revealed were fully funded by industry, and most were at least partially funded by industry. These studies covered controversial pesticides and other chemicals that are currently undergoing EPA review and which Dourson if confirmed would be in charge of regulating.

After Trump’s announcement, The Intercept published a chronicle of how Dourson’s work for DuPont helped the company avoid providing clean water to West Virginia residents after the company’s chemicals used in making Teflon polluted local groundwater. DuPont later was found liable and ordered to pay $1.6 million to a woman who developed kidney cancer linked to the contaminated water.

Environmental groups say such a record casts doubt on all of Dourson’s work, including the petcoke study in Chicago.

“I certainly wouldn’t trust any study he did on its face,” said Charlie Cray, a research specialist for Greenpeace USA. “It doesn’t mean all the work he’s done is suspect or biased, but when it’s underwritten by a company like Koch Industries I would be skeptical from the start.”

Dourson and his colleagues sought to monitor petcoke in the air around the facilities and accumulated in soil and on surfaces.

Their paper notes that the only significant study to previously examine health impacts of petcoke exposure in humans involved Canadian petroleum workers and found an increased risk of lung cancer. But once smoking and asbestos exposure were accounted for among those workers, Dourson wrote, petcoke was not found to be a risk factor.

Since human studies are lacking, Dourson used studies in rats to determine what levels of petcoke exposure could be considered harmful. Those studies showed no significant impacts from the chemicals in petcoke, including when petcoke was applied to rats’ skin. Exposure to petcoke dust at certain levels was found to cause accumulation of petcoke in the lungs and lung inflammation in rats.

In November 2013 and April 2014, Dourson’s team gathered petcoke dust accumulated on surfaces in bus stops, parks and rights-of-way near the Chicago petcoke facilities. The study determined that chemical indicators of petcoke contamination in the soil and on surfaces were no different than baseline accumulation elsewhere in the city.

Inhalation of particulate matter from petcoke has been the main health concern in the area. Particulate matter is known to cause cardiac, respiratory and other health problems regardless of the chemical makeup of the material.

Dourson’s study found that based on KCBX’s on-site air monitors, the level of PM10 (particulate less than 10 microns in size) dispersed was not likely to cause health impacts. The study concluded that “estimated human exposures, if any, are well below levels that could be anticipated to produce adverse health effects in the general population.”

James Brusslan, an attorney who represented residents in a class action lawsuit that ultimately resulted in a $1.4 million settlement, disputed those results. He cited research commissioned by the city of Chicago and residents’ own documentation of petcoke on their property.

“CDM, an environmental expert retained by the city of Chicago, issued several reports which flatly disagreed with the conclusions by Dourson’s colleagues and others hired by KCBX that KCBX’s operations were having little impact on the neighborhood,” Brusslan said. “CDM determined that KCBX’s periphery fence line monitoring was inconclusive, that its bulk sample testing had no persuasive value and that any air modeling performed in the area was unpredictable. As residents could see with their own eyes, dust from KCBX’s facility inundated the neighborhood for years.”

CDM’s criticisms of Dourson’s study include a finding that petcoke dust could migrate off the site into residential areas without being logged by the company’s on-site air monitors, since it might settle on the ground and later be lifted into the air. CDM argued that Dourson’s study did not involve monitors between the company fence-line and the nearest residences, and found that PM10 impacts on nearby neighborhoods could be “substantially greater” than Dourson allowed.

By the time Dourson’s study was officially published in May 2016, KCBX had already been ordered to remove its open piles of petcoke and the class action lawsuit was being settled. Brusslan said that Dourson’s co-author Lyle Chinkin was involved in the lawsuit proceedings. The study notes that Chinkin, along with Dourson and co-author David MacIntosh, were “retained experts for litigation purposes” for Koch, and “Koch Industries was involved in the problem formulation phase of this research.”

Dipro Bhowmik, a researcher for Greenpeace, analyzed Dourson’s research record and related policy developments in different areas. He theorized that since Koch Industries was forced to stop storing petcoke in Chicago, and had previously been forced to stop storage in Detroit, the company may hope to use Dourson’s findings to combat opposition in other cities or states where it seeks to store petcoke.

“It builds that cache of research that absolves petcoke of health impacts, so in the next community that’s impacted, the industry is protected,” Bhowmik said.

Public health and environmental watchdog groups have long complained that studies funded by industry are entered into the public and legal record as independent research.

KCBX portrayed Dourson’s research this way, including in a statement the company made at the time of the class action lawsuit, saying that: “Independent laboratories also have conducted tests on more than 100 soil and surface samples from the neighborhoods near the terminal and found no evidence of coal or petcoke dust.”

Bautista noted that community residents have partnered with universities and non-profit organizations to do their own data collection and studies, including using balloons for aerial mapping and systematic air testing.

“We’ve been using DIY methods for collecting data since the onset of this problem, which was absolutely crucial in how far we’ve gotten,” said Bautista. “We can be experts in these fields because we’re the ones who are impacted the most, and we have the most to gain from having this information available.”