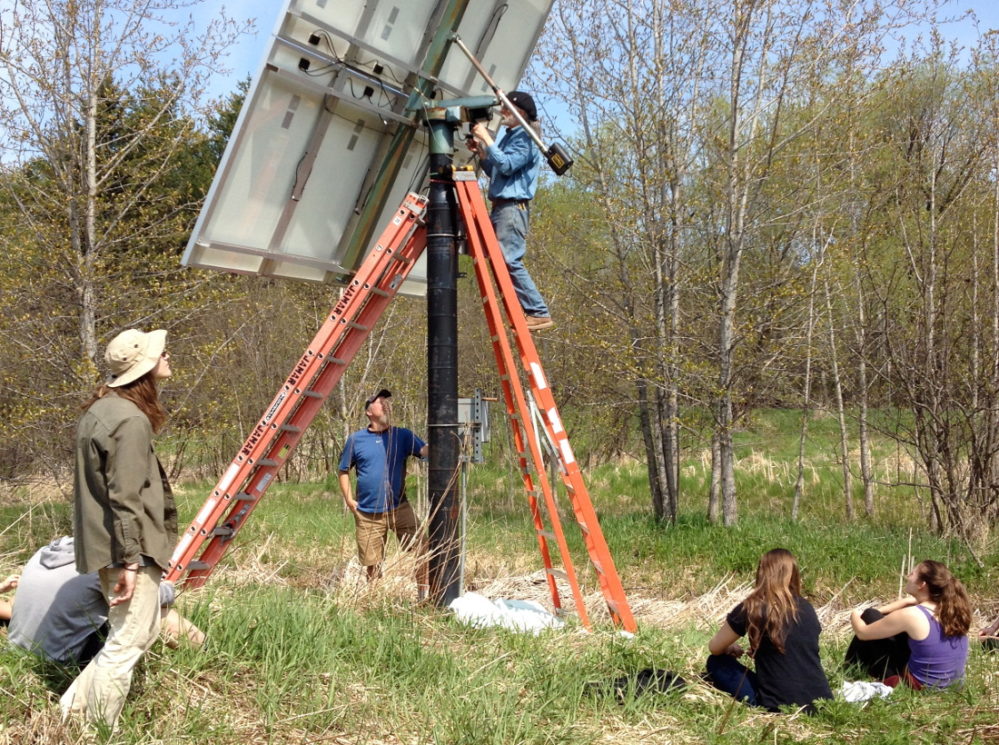 Solar panels at the Hartley Nature Center in Duluth will be backed by a battery storage system, one of several new projects in Minnesota.

While states like California and Hawaii lead the growing market for energy storage, the potential in the Midwest is growing.

Minnesota is seeing a small but growing number of lithium ion battery storage projects that will be discussed along with other battery-related topics at the Midwest Energy Storage Summit in Minneapolis Sept. 15.

Sponsored by the the Energy Transition Lab at the University of Minnesota, the event features speakers such as Mary Powell, CEO and president of Green Mountain Power; Christopher Clark, president of Xcel Energy for Minnesota and the Dakotas; George Crabtree of Argonne National Laboratory and Kelly Speakes-Backman, CEO of the Energy Storage Association.

The transition lab’s initial conference, two years ago, was the first time in Minnesota experts and industry officials came together to discuss storage, according to Barbara Jacobs, energy storage project manager. One result of the conference was the creation of the Minnesota Energy Storage Alliance to share knowledge and promote battery storage.

“There seems to be a lot of interest and excitement about storage across the board right now,” Jacobs said.

So what’s the difference between storage between now and two years ago? One is clearly dropping prices and increased production of lithium ion batteries, accompanied by products from Tesla, Panasonic, LG and many others.

Minnesota utilities are stepping up with projects and proposals. Xcel Energy proposed a solar storage battery project that regulators failed to approve while allowing the utility another chance to submit it after making changes.

Connexus Energy, based in the Twin Cities’ suburbs, plans a 20 MW lithium battery storage project – 20 times bigger than the largest storage project to date in Minnesota.

“We’re seeing larger projects than in the past,” said Ellen Anderson, director of the Transition Lab. “Connexus in particular will likely be the biggest project of its kind across the Midwest, and probably biggest storage project of any co-op in America. ”

The conference next week has a wider focus than just Minnesota, she said, with many more speakers arriving from across the country.

“The original Summit in 2015 was really a look back on what Minnesota had done to date,” she said. “This one is more of a look forward to what is happening to storage and what the opportunities are in the future.”

Why storage, why now?

A key driver to surging energy storage interest is plummeting prices. Connexus sent out a request for proposal in spring and experienced a pleasant surprise when storage prices came in 50 percent less than anticipated, Jacobs said.

The Connexus proposal is part of a growing wave of solar storage projects. Solar continues to drop in price, making it competitive with other energy sources and a good complement to storage.

Also, utilities assess demand charges when business customers need more electricity to meet their needs, she said. Storage is one approach to reducing those charges.

“If you can reduce their usage to under what triggers that demand charge they (companies) can save a lot of money,” Jacobs.

In a recent report the Green Energy Group and the National Renewable Energy Laboratory identified five million businesses – 25 percent of all commercial customers in the country – that could benefit by having storage to reduce their demand charges, Jacobs said.

The report states that 30 to 70 percent of private and nonprofit business utility bills consist of demand charges. Storing energy to avoid those charges could become a booming market in the future, Jacobs said.

Powell, who operates the largest utility in Vermont, sees customers as “driving us to a different energy future” than has been seen in the last 100 years. Energy storage is following in the footsteps of solar as it exponentially grows, she believes.

Green Mountain Power has a 4-megawatt battery (MW) storage project combined with a 2.5 MW solar farm in Rutland on a former landfill site. It’s part of a conscious strategy to reduce the utility’s 760-megawatt peak to 600 MW by deploying a storage strategy, Powell said.

“The cool part of storage is you’re making it part of a living, breathing energy ecosystem,” she said.

Solar storage in particular is moving forward in Minnesota for several reasons, said Anderson, among them a 30 percent investment tax credit. That is only available to developers tying storage into solar energy production, she said.

In addition to cutting peak demand, storage allows solar energy to be “stretched” over a longer number of hours. Instead of having to use solar energy upon generation or sell excess energy back to a utility a customer can tap storage when needed, Anderson said.

Also, solar storage can result in “a great deal of carbon reduction,” she said. “There is a social benefit and an economic one in terms of utility planning.”

One organization looking to do just that is Hartley Nature Center. Located in Duluth, a haven for tourists and those who enjoy the outdoors, the 660-acre park serves 30,000 visitors annually.

Bret Pence, formerly of Ecolibrium3, worked on the solar storage project that became operation in 2016. The battery plus storage was conceived to solve two problems – potential outages and as a workaround to maintain an aging 13 kilowatt (kW) solar system.

Using storage allowed the system to continue operating while testing the economic value of the battery. If the grid goes down Hartley could continue to operate and serve as a safe haven for people in the neighborhood, Pence said.

Finally, there was the idea of demand shaving to reduce energy costs. “Demand charges are 50 percent of (the city’s) billing, or more,” Pence. “The city liked the idea of testing whether they could use this (solar storage) around the city, and Hartley liked being on the cutting edge of energy and the environment.”

A report will be released later with a fuller assessment of the battery, but so far, so good.

“It’s the only solar retrofit in the Midwest, and maybe the country,” Pence said. “What we can say is the battery is doing a good job of peak shaving. It took about six months for us to learn the system and for the system to learn the building…we can definitely say it can provide peak shaving very reliably.”

The 125-kW battery is part of a pilot microgrid which includes vertical wind turbines, a solar array and a combined heat and power plant, all located in the building. OATI offers a microgrid software solution.

Finally, Xcel Energy has proposed an energy storage project for a substation in Belle Plaine, a distant Minneapolis suburb. While the Public Utilities Commission initially turned down the proposal, it left open the door for Xcel to resubmit it later.

Xcel’s Alice Jackson points out energy storage is not a new concept – the utility has been doing energy storage since the 1940s with pump hydro and natural gas storage caverns.

The lithium ion revolution is of interest to Xcel because it plays a role in the electrification of the transportation industry, capacity and stability of the grid.

Dropping prices and increasing production of batteries is capturing the attention of the market. “Storage being economical for us is getting closer but it’s not there yet,” Jackson said.

Xcel sees the advantage of batteries as their “stackability,” or the ability to do many things at once at the different sites, she said. In Colorado, the utility has two storage projects, at Denver’s international airport and a smaller installation in Stapleton at several homes with rooftop solar, she said.

In Minnesota Xcel has a 1 MW battery in Luverne that has been used to store wind energy. The energy was deployed for “pricing arbitrage” and to get the experience of operating a large storage operation, Jackson said.

A solar storage project Xcel proposed for a substation in Belle Plaine was initially turned down by Minnesota regulators but they left the door open for the utility to bring it back again.

While Xcel will continue to experiment with battery storage for now it only makes economic sense in places with expensive electric rates, such as Hawaii.

“It’s not cost effective for our customers today but we continue to try to look for opportunities,” she said. “That stacking characteristic tis going to key in being able to incorporate this technology on our system at the price point that it’s at.”