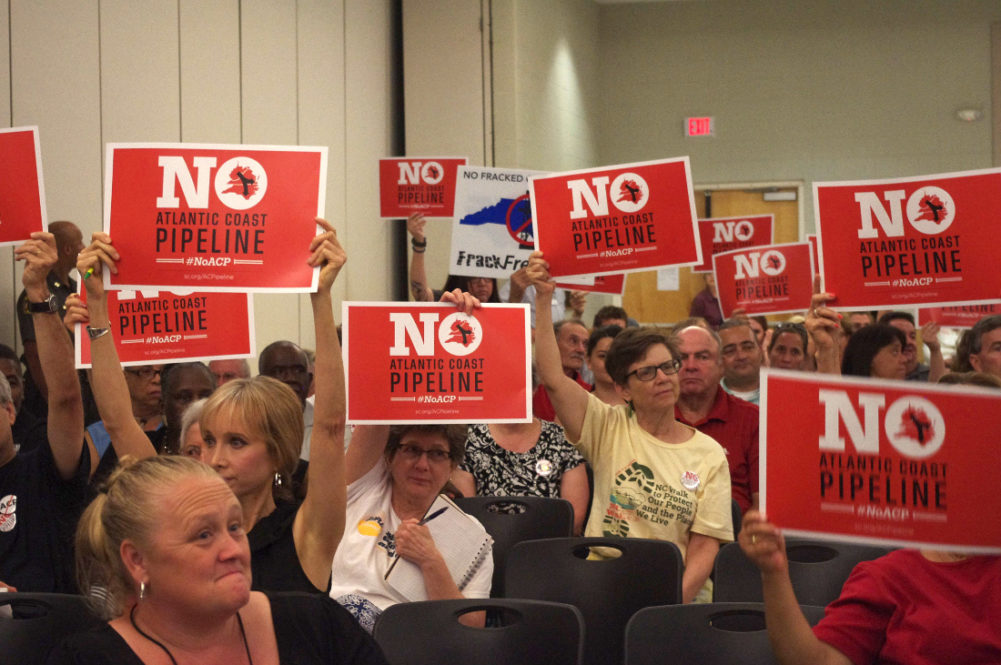 At public hearings and through written comments, a significant number of North Carolinians urged state regulators to deny the Atlantic Coast Pipeline a clean water permit this summer.

Faced with a Monday deadline and a lopsided number of public comments opposing the Atlantic Coast Pipeline, North Carolina Gov. Roy Cooper’s administration has delayed its decision – likely until mid-December – on whether to permit the controversial project.

Without fanfare or press release late yesterday, the state issued a four-page “request for additional information,” part of its duty under the federal Clean Water Act to ensure the natural gas pipeline won’t harm the over 320 rivers and streams and hundreds of acres of wetlands in its path.

Pipeline foes hailed the action, which appeared to vindicate a critique they’ve been leveling for months against the project, slated to hug the state’s I-95 corridor and pass through eight eastern North Carolina counties.

“The current application leaves out critical information,” said Geoff Gisler, an attorney with the Southern Environmental Law Center. “There are literally hundreds of streams and wetlands that the company has asked to dig through with hardly any analysis.”

The delay followed a series of rowdy hearings and meetings last month that were packed with pipeline opponents, and the receipt of over 9,000 written public comments – 85 percent urging rejection.

“That’s an incredible number,” said Gisler. “That’s something you’d expect to see in a federal rule making that covers the whole country.”

The vast majority of comments, both for and against the project, were short form letters. But the most extensive remarks from opponents highlighted a dearth of detail from the pipeline company – a joint venture of primarily Duke Energy and Virginia-based Dominion Resources.

“Atlantic’s application fails to provide necessary information to ensure that pipeline construction will not cause adverse impacts to wetlands and waters of the state,” wrote the Haliwa-Saponi, one of many Native American tribes along the pipeline’s route.

Natural gas has low solubility in water, making the chance of gas leaks that would harm creeks and rivers remote. But advocates say the pipeline fails to show it will mitigate the much bigger risks it poses to waterways during its construction.

Trenching through rivers and streams can stir up dirt and other pollutants, threatening the dozens of rare and endangered mussels, salamanders, and crayfish that live in eastern North Carolina’s creeks and streams.

“The application is lacking sufficient information…for reviewers and commenters to evaluate the impacts the project will have on water resources and aquatic species,” wrote Sound Rivers, the watchdog for the Neuse and Tar Rivers, both waters in the pipeline’s path.

Drilling underneath waterways is considered less intrusive, but poses a separate hazard: leaks of drilling mud used to lubricate the drill bit. Those problems have caused regulators to halt construction of pipelines in Ohio and Pennsylvania in recent months.

“It has never been clearer that a robust analysis of the [Atlantic Coast Pipeline] is necessary to protect the health of our communities as well as our waters and our wetlands,” wrote the Southern Environmental Law Center and the Sierra Club in their 45-page comments, pointing out these instances.

The state’s September 14 letter to the pipeline company appeared to echo some of the project’s critics.

“The [state] has determined the following additional information is necessary to continue to process your application,” the memo reads.

It goes on to request, among other details, more “site-specific” information, a “restoration plan for all stream crossings,” and an analysis of “cumulative impacts” of the pipeline’s 180-mile route through the state.

Developers have 30 days to respond; the state will then have another 60 days to grant or deny the certification, according to Brian Wrenn, a chief permitting official.

But as of now, the state’s letter says to Atlantic, “please be aware that you have no authorization under Section 401 of the Clean Water Act…for this activity.”

While a three-month delay is short of outright rejection, environmental advocates draw hope from the fact that three states have rebuffed pipelines because of their potential impact on water quality, two in the past year and a half.

Last month, a federal appeals court dealt the latest blow to one of these, the Constitution Pipeline, a 121-mile pipeline proposed from Pennsylvania to New York. Their main reasoning was a lack of information.

“We conclude that the denial of the § 401 certification after Constitution refused to provide relevant information, despite repeated [New York State Department of Environmental Conservation] requests, was not arbitrary or capricious,” the justices wrote.