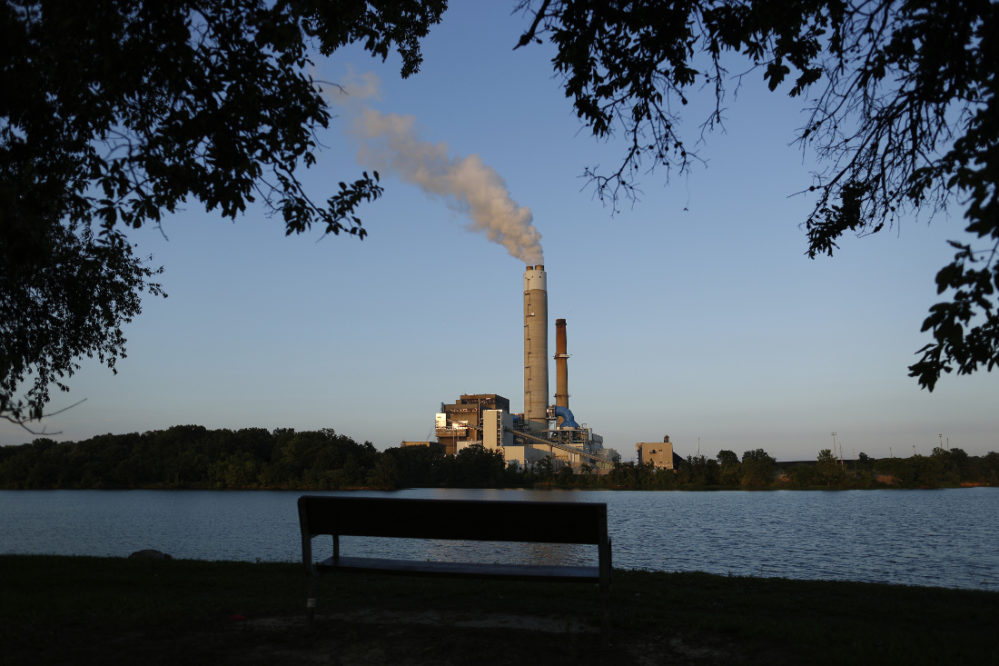 Advocates are concerned the Coffeen power plant, which has sophisticated but expensive scrubbers for sulfur dioxide, could close under new pollution rules.

Correction: A previous version of this story incorrectly referred to the Baldwin plant, on second reference, as not having scrubbers. The Baldwin plant does have scrubbers, and additional clarifying information has been added to this story.

Documents and emails obtained by environmental groups show that Dynegy representatives were in close contact with Illinois Environmental Protection Agency officials as the agency drafted changes to Dynegy’s responsibilities under a pollution reduction agreement.

Dynegy made significant specific edits to the text of the proposed new rules, changes which were incorporated into the IEPA’s next draft, according to the documents, which were obtained through a Freedom of Information Act request.

It’s not easy to decipher the likely impact of the complicated changes to the agreement originally negotiated between power companies and the state in 2006, known as the Multi-Pollutant Standard, or MPS.

But environmental lawyers and advocates fear the company pressed for the changes in order to be able to close one or more coal plants that have scrubbers installed to remove sulfur dioxide, while continuing to run or even ramping up generation from its dirtier plants without scrubbers.

“Ten years ago we fought for this rule and we got assurances about the scrubbers being installed,” said Faith Bugel, an attorney representing the Sierra Club. “Now there’s an incentive to retire cleaner plants and hundreds of millions of dollars invested in scrubbers will just be thrown away, along with the clean air benefits. That outcome to me is absurd.”

Illinois EPA director Alec Messina and Dynegy spokesman David Byford both countered that under the new proposed rules, the total amount of sulfur dioxide the Dynegy plants can emit is lower than under the existing rules. And Byford said that in the past the company has retired “a number” of plants without scrubbers while only retiring one plant with scrubbers.

Messina said Dynegy approached his agency about a year ago “looking for some flexibility” in the MPS, and then the agency and company went through what he described as a typical process to reach a new proposal.

“We are obligated by law to make sure there is no backsliding” in protections, Messina said. “Regardless of whether they keep operating or close down plants, their allowable emissions will get lower than they are today.”

Fears scrubbers could be scrapped

Under the MPS, Illinois power companies Dynegy, Ameren and Midwest Generation agreed to install pollution control equipment for sulfur dioxide, mercury and nitrogen oxide by certain deadlines. Some plants were allowed to delay or avoid installing certain controls if the companies promised to make upgrades on other plants.

Under a deal approved in 2013, Dynegy acquired Ameren’s five Illinois coal plants, which had become so financially problematic that Ameren essentially paid Dynegy to take them off its hands.

In Dynegy’s 9,000-MW Illinois fleet, the Baldwin, Duck Creek, Havana and Coffeen plants have scrubbers installed, while other plants, including Joppa and E.D. Edwards, do not. The 1,000-MW Coffeen plant in southern Illinois has been lauded for its high-performance scrubbers and related pollution controls. But scrubbers are expensive to run, requiring extra power inputs, staff and disposal of the scrubbing byproduct.

Under the current MPS agreement, Dynegy’s fleet has to meet a certain rate of average sulfur dioxide emissions per amount of energy produced. This means that running the cleaner plants with scrubbers helps balance the emissions of running the dirtier plants.

The new draft rules instead give Dynegy a limit on total tonnage of sulfur dioxide emissions each year.

Environmental experts who analyzed documents obtained under the FOIA request and publicly available emissions and generation data said that it appears Dynegy is comfortably able to meet both the current and proposed new limits with its current generation mix. But they suggest Dynegy might not be able to meet the existing average rate of emissions limit if Coffeen or other plants with scrubbers were to close.

“Coffeen has a big very effective scrubber that makes it the cleanest plant in their operations and probably one of the cleanest in the country, but it has all this extra cost” to run, said Brian Urbaszewski, director of environmental health programs at the Respiratory Health Association.

“Right now because of the way the rule is set up, every time they run a dirty plant to make money, they have to run the clean plant to make sure the rate evens out. If the rule were changed to allow [the annual tonnage] cap, they could just ditch Coffeen.”

“Just because Dynegy has decided to shut down some of its uneconomic coal plants, doesn’t give it a hall pass to not clean up its older coal plants,” added Howard Learner, executive director of the Environmental Law & Policy Center.

The company has not indicated any plans to close plants, and advocates note they are speculating based on larger trends in the power industry.

The new draft rules say that if Dynegy retires plants, their total annual tonnage limit for sulfur dioxide remains the same. In this case the remaining plants could each theoretically emit more sulfur dioxide, critics note.

Both of these changes were requested and language was drafted by Dynegy, as shown in the documents obtained under the FOIA. Byford said that the federal acid rain program and Cross-State Air Pollution Rule use tonnage limits, and so the switch simplified Dynegy’s planning process.

“Both [types of limits] are equally acceptable methods of controlling emissions, and are widely used across the industry,” he said. “The advantage of a tonnage approach is that it caps the amount of emissions that can be released, whereas a rate limit has no cap…The MPS rules were created when the plants were owned and operated by separate owners, so it simply makes good policy to bring all the plants under a single, consistent rule.”

Byford said the emissions limit should stay the same even if plants close.

“If plants are closed in the future, it does not mean that there is a corresponding drop in the demand for electricity; in all likelihood, other Dynegy plants would be called on to ramp up and meet the demand,” he said. “If emissions are lower across the fleet, the public is better served by the rule.”

Emissions data available in the EPA’s Air Markets Program database shows that in 2016 Coffeen emitted only 33 tons of sulfur dioxide, and the 425 MW Duck Creek plant only 10 tons. Plants without scrubbers — Hennepin, E.D. Edwards, Joppa and Newton— emitted  4,065; 5,890; 7,634 and 7,743 tons respectively. The Baldwin plant has scrubbers but still emitted 4,020 tons of sulfur dioxide, since it was designed to burn Western coal that is lower in sulfur than the Illinois coal that can be burned in the Coffeen and Duck Creek plants, hence the Baldwin scrubbers didn’t need to remove as much sulfur to comply with the state limits.

Robin Garlish is a teacher who lives across the river from the E.D. Edwards plant near Peoria. She blames the plant for her teenage daughter’s asthma and serious respiratory problems she’s suffered over the past year, forcing her to take leave from work and undergo breathing treatments every four hours. She said her daughter had to quit high school volleyball and softball because of her asthma, but now that she is at college in Chicago she has few problems.

“I’m a Girl Scout leader, and during the introductions I show them my rescue inhaler and ask how many have one of these. One hundred percent of the hands go up,” Garlish said. “When people come to visit me they get a tickle in their throat and can’t stop coughing. The coal plant is doing it.”

Sulfur dioxide is known to have localized health impacts, so people living closer to plants without scrubbers may  disproportionately suffer increased risk of respiratory problems, and increased risk of cardiac disease and cancer linked to particulate matter that can form as a result of sulfur dioxide concentrations.

Environmental advocates cite this as another reason to worry about cleaner plants closing and dirtier ones continuing to run or ramping up. Messina said that given the height of stacks, there should not be local health impacts from the plants. He added that the IEPA demanded and the proposed rule includes special provisions to make sure the Joppa plant can’t run at its full capacity, since that would affect a non-attainment area under federal air pollution standards.

In September 2016, Dynegy’s subsidiary alerted the Illinois Pollution Control Board that it was not able to install scrubbers on its Newton plant, as it had promised to do under the MPS. That move nullified a variance the pollution control board had previously granted Dynegy giving it more time to install the scrubbers on Newton.

In November 2016, Dynegy state government affairs senior director Jeffrey Ferry asked Messina via email about including the rule change in a “large energy legislation package,” presumably meaning the Future Energy Jobs Act that was being negotiated at that time. The provision did not end up in the FEJA, which was signed by Governor Bruce Rauner a few weeks later. Messina said he does not remember a proposal to fold the MPS change into the legislation.

Stakeholders including companies and environmental groups regularly have an inside track working with regulators and lawmakers on the policies that affect them, including helping to draft legislation and rules. But environmental leaders said the communications revealed in the FOIA go beyond what they see as typical and appropriate.

Emails between the IEPA and Dynegy as well as multiple drafts of the rules show how the entities discussed aspects of the rule, with Dynegy appearing to get its way on the points most important to the company.

“The FOIA shows how much control Dynegy had over this rule,” said Bugel. “And IEPA, the agency that was tasked with regulating the environment, managing pollution and protecting the environment for this state is conceding to what Dynegy was demanding.”

Messina countered that Dynegy was not happy with some of the provisions the IEPA demanded, and said, “we talk to people all the time about things that are important to them,” including talking to environmental groups and companies.

The Illinois Pollution Control Board and a legislative rules committee will need to approve the proposed new rules for them to take effect. A public comment period on the IEPA’s draft of the rules is closed, and there will be another public comment period during the pollution control board’s deliberations.