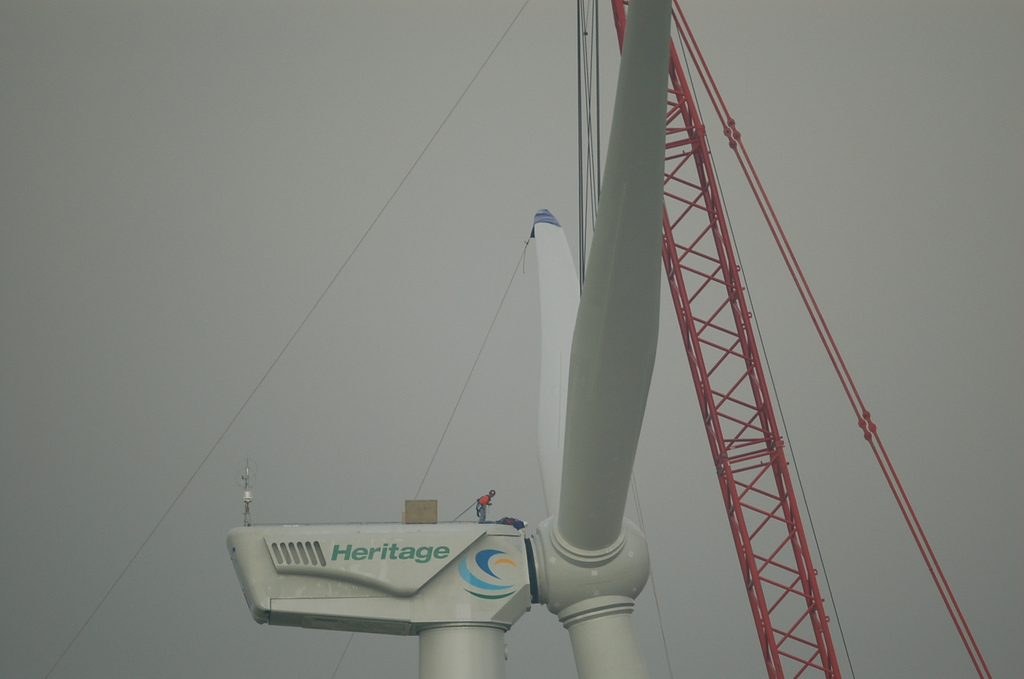 A wind turbine under construction in Michigan in 2008.

After nine years of commercial wind energy development, Michigan State University researchers say they now have a better sense of what drives support — and opposition — for projects across the state.

Late last month, Michigan State University Extension released an updated set of guidelines and a sample zoning policy meant for communities as they craft local wind regulations. It is the first update to the guidelines since 2008, and also includes more detailed considerations for noise and shadow flicker.

Additionally, case studies in west and mid-Michigan counties show how projects can succeed when proper zoning processes are followed and developers work closely with landowners in initial stages.

Since 2008, hundreds of turbines have been installed to meet the state’s original 10 percent renewable portfolio standard, and projects have been met with varying degrees of support.

“That was certainly the early days of commercial wind in Michigan,” Brad Neumann, a senior extension educator and co-author of the guidelines, said of the original document. “Certainly there has been a lot more research on the impacts of wind energy in communities.”

The guidelines began as recommendations from a wind working group that started convening in the early 2000s. They can be analyzed on a local basis, as Michigan — unlike states like Ohio — does not have statewide zoning rules for wind energy.

“Our intent is to publish this as something for communities to start a conversation over,” Neumann added. “Our goal is to provide the latest evidence-based research and best practices as of now — not to provide specific recommendations but to offer a starting point in discussions for the community to hash out, such as specific numerical standards.”

The document adds that the material was “developed with the intention of striking an appropriate balance between the need for clean, renewable energy and the necessity to protect the public health, safety, and welfare.”

Among the top areas of research has been the impacts of noise on nearby residents, Neumann said. Members of the original wind working group based recommendations on a 55-decibel threshold — “beyond that, the document was largely silent on measurement methodology, duration of measurement and some of the instrumentation. It was just a crude standard that in practice is quite difficult,” Neumann added.

While the guidelines don’t specify a value for local regulations to follow, Neumann said “human health impacts are minimal, if at all” in levels at the 40-45 decibel range. And still, these are numbers most associated with nuisance rather than negative physical impacts, he added.

“The quantifiable human health impacts are pretty difficult to pin down — certainly there is a nuisance factor here,” he said. “There’s also a factor of a person’s perceptions about the rural landscape.”

Between March and August of this year, later drafts of the guidelines delved deeper into sound measurement methodology to be “more explicit” for communities, Neumann said.

John Sarver, of the Great Lakes Renewable Energy Association, helped convene the original wind working group in 2003. He says regulations have evolved compared to what was essentially a lack of a template then, particularly on sound.

“Over time, consultants and planning commissioners themselves have gotten more sophisticated on what the standards should be and how they should be monitored,” Sarver said. “When we were first struggling with this, we didn’t have the experience you gain over the next nine years.”

Sarver, who reviewed drafts of the updated document, said the visual aspects of wind development are “almost impossible to deal with in zoning.”

“The guidelines and sample language include some restrictions about what you can do, but the reality is some people think (turbines) are works of art, some people think they’re the ugliest thing in the world,” Sarver said. “As turbines are getting taller and bigger, the visual impact is getting even greater. Whatever you do, it’s not going to change peoples’ perspective on what they like.”

In addition to health, researchers in Michigan and throughout the U.S. are delving further into the circumstances that drive support and opposition for wind projects. This includes how developers interact with communities in the early stages of projects, as well as how royalties are divided among landowners.

Wind development in Gratiot County in mid-Michigan is often cited as one that succeeded based on community buy-in and an active developer compromising with property owners. The report also cites a development in Mason County, in west Michigan, that was able to overcome strong, vocal opposition after local officials “stayed within the realm of substantive due process requirements” and presented “accurate, science-based” information to overcome legal challenges.

The guidelines also note that, in areas where wind development has been polarizing, “education on a topic like this can be somewhat limited in its effectiveness,” Neumann said, unless done early by an unbiased party.

‘When more people in a community are paid, it leads to less tension between neighbors about the wind project.’

Mills has also seen an uptick in royalty payments that expand the pool of landowners who receive money from development — not just those with wind turbines on their property.

“Some people will say this is a way to buy support,” Mills said. “But in order for turbines to function properly, you can’t line them all up in a row. You really do need free access to wind that blows over properties, and so paying people between turbines makes sense. My research says that when more people in a community are paid, it leads to less tension between neighbors about the wind project.”

While the community discussion aspect is important in early stages, “I don’t think specific noise levels or setback distances are going to be a silver bullet for a community to be happy about it,” Mills said. “Communities first need to make a decision about whether this fits into their master plan.”

Mills has found places where zoning measures allow for the siting of turbines, while other places have “made it impractical if not impossible but are legally defensible.”

Yet one of the key takeaways from the guidelines is that local zoning — through setback distances, noise levels or height limitations — can’t restrict development to the point of excluding it.

“Given the need for reliable, clean energy, as prescribed in the Michigan Clean, Reliable, and Efficient Energy Act of 2008, (and the omnibus legislation adopted in 2016) it is unlikely that a local unit of government could successfully argue in a court of law that there is not a demonstrated need for utility scale or home-use wind energy systems, and therefore such systems may be effectively banned through overly restrictive and unreasonable zoning regulations,” the guidelines say.

Next phase for wind

Late last year, state lawmakers approved comprehensive energy bills that increased the state’s renewable portfolio standard to 15 percent by 2021. (Up from 10 percent, which was met in 2015.)

However, the degree to which new wind projects meet that target is uncertain, particularly as the cost of utility-scale solar declines. Some officials in the Thumb region have claimed there’s a saturation point for turbines and have passed moratoriums to halt development. DTE Energy has also said its future wind development there may be limited.

“It takes a unique approach within the community to do an assessment of what might be the right landscapes or locations for wind or solar in order to minimize some of the land-use conflicts,” Neumann said.

Sarver is confident that the steadily declining costs of wind in Michigan along with the new renewable energy standard will lead to more development, despite opposition in places like Huron County in the Thumb, where roughly 500 turbines are operating or under construction.

“I think you’ll see them continue to develop and we’ll see them in different counties around Michigan,” he said. “Inevitably there will be controversy about it.”

Sarver added that there’s always a looming debate in Michigan about offshore wind resources in the Great Lakes, a topic no less controversial than onshore development.

“At some point, offshore wind will come back as an issue,” Sarver said. “If you’re in the wind industry and keep looking around for a lot of land that could be developed, at some point you may have used the best opportunities and then offshore starts looking even more attractive.”