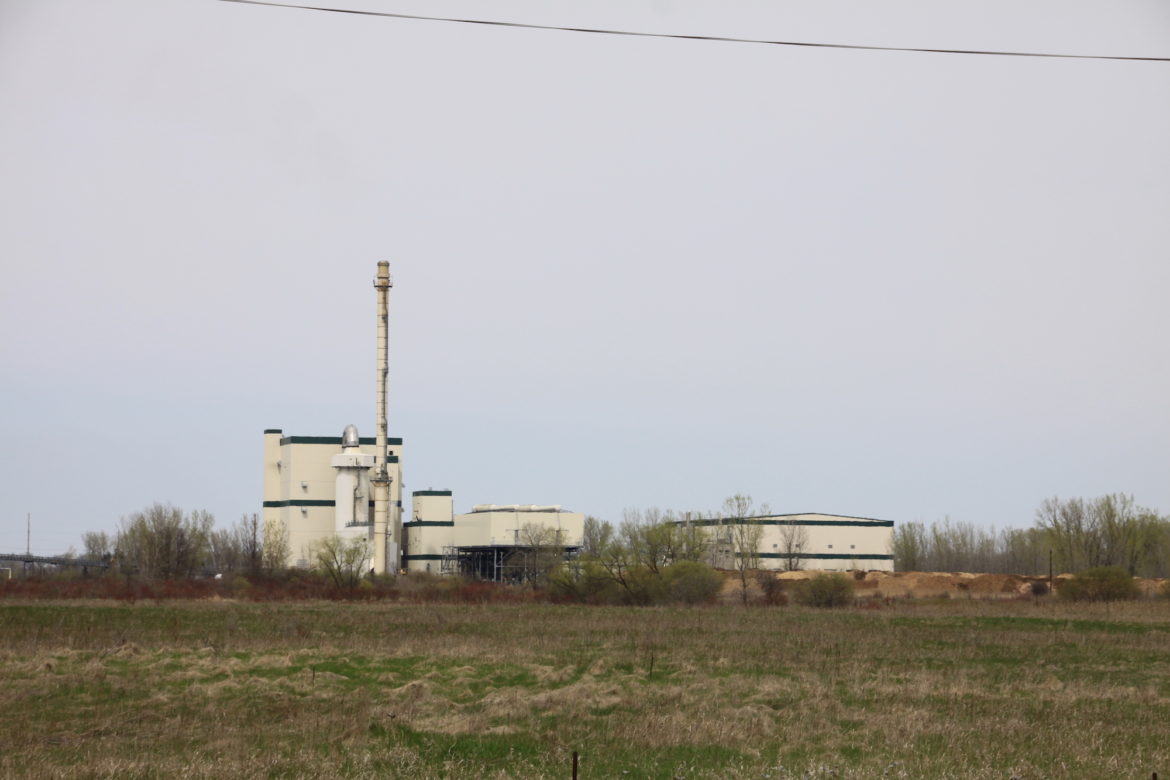 Minnesota regulators are weighing a plan by Xcel Energy to close a biomass plant in Benson, which the utility says is too costly run compared to other energy sources.

Minnesota utility regulators are studying a proposal by Xcel Energy to close two biomass plants that could mark a turning point for the industry here, particularly as prices for renewable energy drop.

The proposal — which has approval by the state legislature and the communities affected — would close Benson Power, which burns turkey waste and wood, as well as a biomass plant in northern Minnesota owned by the Laurentian Energy Authority (LEA).

Closing the two plants, which make up half of Minnesota’s biomass generation, could cost hundreds of jobs, and state forest management officials and the poultry industry say it will create turmoil among various suppliers to the plants. Their message is simple: slow down.

The legislature passed a bill last session supporting Xcel’s plan to close the plant and devote $54 million over a number of years from the state’s Renewable Development Fund to assist the communities in transitioning away from biomass. A state development agency is also looking at the economic impact and potential of the closures.

The Minnesota Public Utilities Commission closed comments earlier this month on both proposed closures and has announced it will make a decision by the end of the year. The commission will rule on whether to allow Xcel to cancel power purchase agreements and buy and close both plants.

“The situation raises the question of what is the role of biomass in the energy strategy in this state.”

State regulators are also studying changes to a contract with a waste-burning plant in Minneapolis. These actions leave biomass advocates wondering if Minnesota will have much of an industry left.

“The situation raises the question in Minnesota of what is the role of biomass in the energy strategy in this state,” Smith said. “It’s not particularly clear at this time.”

Xcel has contended the contracts — which in both cases would have lasted roughly another decade — cost too much, especially in light of low wind energy prices. Xcel spokesperson Randy Fordice said in a statement that the “energy generated from these facilities is the most expensive energy on our system and is more expensive than other cleaner renewable sources.”

New wind energy costs Xcel an average of $15 to $25 per megawatt hour (MWh), while biomass is around $150 per MWh. All other sources of generation — nuclear, solar, natural gas and coal — are also less expensive than biomass.

“The cities of Benson, Virginia and Hibbing have served as hosts for biomass projects for decades and we are working with them through this transition,” Fordice added.

Xcel would save $700 million over the next decade even after paying all the costs of closing the plants, he said.  The majority of that savings, $480 million, comes from the Benson plant.

Both plants arose from a more than 20-year-old settlement to promote clean energy while assessing Xcel fees for storing spent nuclear fuel casks at its Prairie Island Nuclear Generating Station in Red Wing. (Later, fees were assessed to casks stored at the state’s other nuclear plant.)

Legislation passed in 1994 assessed a $500,000 fee per cask that began collecting the money in 1999. The funds went into a new program called the “Renewable Development Fund.” The law also required Xcel to purchase 425 megawatts (MW) of wind and 125 MW of biomass.

Investors in 2007 built the 50 MW Benson plant, the first turkey waste-burning facility built in the country, to sell power to Xcel in order to help the utility fulfill its mandate. Two municipally owned utilities in Hibbing and Virginia created LEA, which generated 35 MW, for the same reason.

Xcel attempted to quietly move a law during the past legislative session to end the plants before facing public backlash after reports in the Swift County Monitor-News. As part of the deal, Xcel suggested using money from the Renewable Development Fund to lessen the blow to the communities involved. How that money would be deployed remains unclear.

The plan has met with approvals from the Benson city council and the two municipally owned utilities. Still, there may be some pain before new businesses potentially arrive to take the place of the plants.

The Benson plant, which has generated the most interest, pays around a quarter of the city’s total tax levy, according to Reed Anfinson, publisher of the Swift County Monitor-News.  Xcel plans to continue paying those taxes for the next two years while it closes the plant.

Anfinson is a former member of the Benson Economic Development Authority and represented the city at a recent hearing on the plant’s closure. The 45 jobs that would be lost at Benson Power is a big number but by no means a huge economic blow, he contended.

“It’s a bittersweet deal for the community’s leadership because they worked so hard to get this plant,” he said. “We were one of 34 communities vying for it … There was a feeling it would always be there but now it’s going.”

Scott Dane, head of Associated Contract Loggers & Truckers of Minnesota, believes the plant closings would sound the death knell to many family-owned businesses. “It will be the bankruptcy of many companies — supply, logging and transportation companies,” he predicted.

LEA annually purchases $7 million in biomass material, while Benson Power bought $20 million of wood chips, he said. That created employment for loggers, who have seen declining fortunes for years, and for trucking firms, he said.

To Dane, it’s unclear why Xcel chose now to close the plants. The cost of biomass always has been significantly higher than other energy sources, and the price “hasn’t changed more than 10 percent over the past 10 years,” he said.

The lack of warning blindsided some suppliers. For a decade Xcel Energy had been buying energy produced by Benson Power, which played a major role when Steve Skullerad decided to buy Hul Brothers Trucking Co. a few years ago.

He invested $7 million in new equipment for his turkey waste hauling business on the basis of the continuing power purchase agreement. Skullerad said his firm made a $1 million investment in equipment in February after learning of a contract Benson Power was making with another company.

His preferred outcome is that the PUC denies Xcel’s request to close the plants and keep them running, though he seemed open to a financial arrangement.

“It’s only reasonable to try to compensate those who have made multi-million dollar investments and have no chance to recover,” Skullerad said. “Millions and millions of dollars of investments have been made over the years that were based on the expectation that these contracts would continue.”

Dave Carlson, owner of Carlson Timber Products in Sandstone, has delivered wood to Benson for several years. “I don’t know if I’m going to make it because it’s such a key part of my business,” he said. “We can’t just shift to something else.”

Benson Power’s closing could cause a shift in the forest products market. When Carlson buys wood in blocks on the open market it has to take all of it, and in summer as much as half of that stock is “off species” that cannot be sold to any buyer except Benson.

As for the argument that the deal is good for Xcel ratepayers, Carlson says the savings the utility has projected for customers is nominal compared to the impact on the trucking and logging industry, which may be as much as $150 million.

Suppliers need time to find new clients, though he’s not optimistic many can because the market for low-grade wood biomass hardly exists. The state and Xcel will have to come up with some kind of compensation for suppliers injured by the abrupt decision to terminate Benson Power, he suggested.

State officials will also be studying North American Fertilizer, a company next to the Benson plant which uses ash from the plant for fertilizer.

State Sen. Andrew Lang, a Republican who represents Benson and the surrounding area, said he and other local legislators have been meeting with industry officials affected by the plant’s demise.

While he lauded Xcel as a good partner, he said everyone involved “is a bit frazzled” by the speed with which it is moving through the regulatory process. A supporter of Xcel’s decision to end the contracts, Lang recalled being told that details could be worked out in next year’s session.

State money cannot easily be used to help trucking and logging companies that lose money and lay off employees and contractors, he said. Lang hopes further negotiations might lead to some kind of additional help for those industries.

Turkey producers will take a hit from Benson’s closing, according to the Minnesota Turkey Growers Association. In written testimony before the PUC, the organization believes having an excess of turkey waste could create a biosecurity hazard that could lead to diseased flocks.

In 2015, Minnesota’s turkey industry was decimated by avian flu, and the association believes without the plant that sort of epidemic could break out again.

Turkey dung makes great fertilizer, but it can only be spread on fields during certain times of the year. Producers who sell the waste for fertilizer could also take a hit as prices drop due to more supply.

“We believe the closure of the plant in Benson will not only be economically detrimental for poultry farmers but could cause environmental hardship, as well, because farmers will need to find another market for turkey litter and they will need to do this quickly,” said Steve Olson, executive director of the association.

“At a minimum, we request that the plant be phased out over a five-year period to give our industry time to figure our best options and move forward.”

Meanwhile, the state Department of Natural Resources argues that neither Xcel or the PUC have yet taken into account the impact on the state’s forest industry.

Without a biomass market, the DNR states in a letter to the PUC that loggers who once served Benson will enter traditional markets, driving up prices for wood and result in the loss of mills.

“Without these markets, land managers will likely have to pay someone to dispose of these forest products rather than utilize them,” a DNR annual forest management report said.

U.S. Forest Service Supervisor Constance Cummins also told regulators that the loss of the biomass project at LEA will significantly increase the cost of its hazardous fuels reduction program in the Superior National Forest.

However, supporters of closing the plants say forest management is not within the purview of Xcel. “Managing state forests is not Xcel’s problem,” Anfinson said.