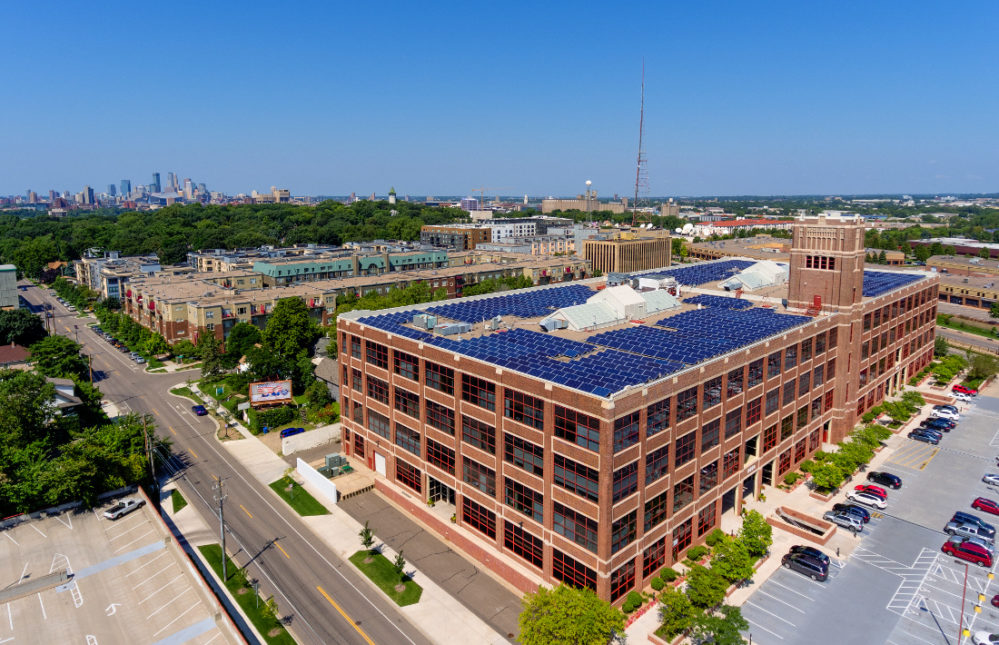 The Court International Building in St. Paul hosts the largest solar array in the city.

A solar project on several buildings along a major Twin Cities rail corridor is being studied to determine how distributed energy could impact future transit investments.

Collectively generating one megawatt of electricity, the four projects along the Green Line — a light rail line connecting downtown Minneapolis and St. Paul — were funded in part by a $1.8 million Xcel Renewable Development Fund grant.

“We’re looking at if there’s value in the future of using distributed energy resources to reduce the cost of additional electrical infrastructure along transit lines,” said Eric Pasi, vice president of business development at IPS Solar in Minneapolis.

Originally, IPS Solar founder Ralph Jacobson conceived of having solar offset the need to build more distribution and Xcel Energy, the utility serving the line, could reduce the need for additional distribution or transmission.

Funding for the project came after the Green Line was under construction, he said, so the premise was not tested. Yet Pasi said once all the panels are operating the energy they will produce roughly equivalent to 7 percent of the electricity consumed by the 11-mile Green Line.

IPS Solar partnered with WGL Energy, a Washington, D.C.-based energy developer which leases the rooftops and sells the electricity back to the building owners. The company manages more than 300 MW of distributed energy in 23 states and the District of Columbia.

The third-party ownership model approach was relatively new in Minnesota when IPS Solar first began talking to building owners, Pasi said. But once they understood the concept the sell became easy, especially since on average they could save 20 percent on their electricity bills, he said.

”It took a couple of years to speak to commercial real estate owners and get them comfortable with leasing their roof space and lowering their electricity bill,” he said. “It was a new conversation back in 2013 and that’s why it took a long time for the project to reach fruition. The idea of creating revenue from your rooftop had not spread.”

Building owners sign a 15-year contract with WGL Energy and when it ends they are given the option of purchasing the solar panels, Pasi said. They can expect to save as much as 20 percent on the energy produced by the panels, he added.

As part of the project IPS Solar built two of the largest solar installations in St. Paul. The historic Court International Building — opened in 1915 — boasts a 430 kilowatt array, Pasi said. The nearby University Enterprise Labs, an innovation center, has a 390 kW installation. The final project, a 110 kW array, is atop an office building.

Max Currie is construction manager with Suntide Commercial Realty, which manages two buildings in the project: Court International and the 1000 University, which has a 40 kW installation. The power generated from the panels costs two thirds of what he pays Xcel for electricity, he said.

More importantly, however, is that on the hottest and sunniest days of the year the panels reduce the amount of highly priced peak power commercial customers are charged due to the high demand on the grid.

A third of a reduction in peak demand charges translates into saving more than $2,200 a month in utility costs, Currie said.

The reason Suntide signed up with WGL came from a continued focus on energy efficiency and sustainability. The commercial real estate firm manages the first and second most energy efficient buildings in Minneapolis based on Energy Star ratings, he said.

There’s a marketing value in having efficient buildings, Currie noted, because so many tenants now want “green initiatives and carbon footprints and things of that nature,” he said.

“We paid nothing to put them up, it’s free and saving us money and helping the environment, all at the same time,” Currie said.

That’s precisely the appeal for MetroPlains Management, which operates 1919 University. The company’s 110 kW project will be turned out a bit later this year due some technical issues, said Jason Sklar, property manager. He expects the panel to produce four to six percent of the building’s energy needs.

Although the company has a much smaller and older solar array it manages on another building on University Avenue, the appeal of third party ownership made this deal happen, he said.

“I’d say that financial model of a third party financier allowed our property owners to easily make an agreement to allow solar panels to be allowed to be installed on this building,” Sklar said. “There were no upfront costs and a mutual benefit for both parties.”

The idea of solar on the Green Line is catching on, Pasi added, with projects planned for a Super Target and a senior complex. “Add those up and there are significant benefits to the grid in that area,” he said.