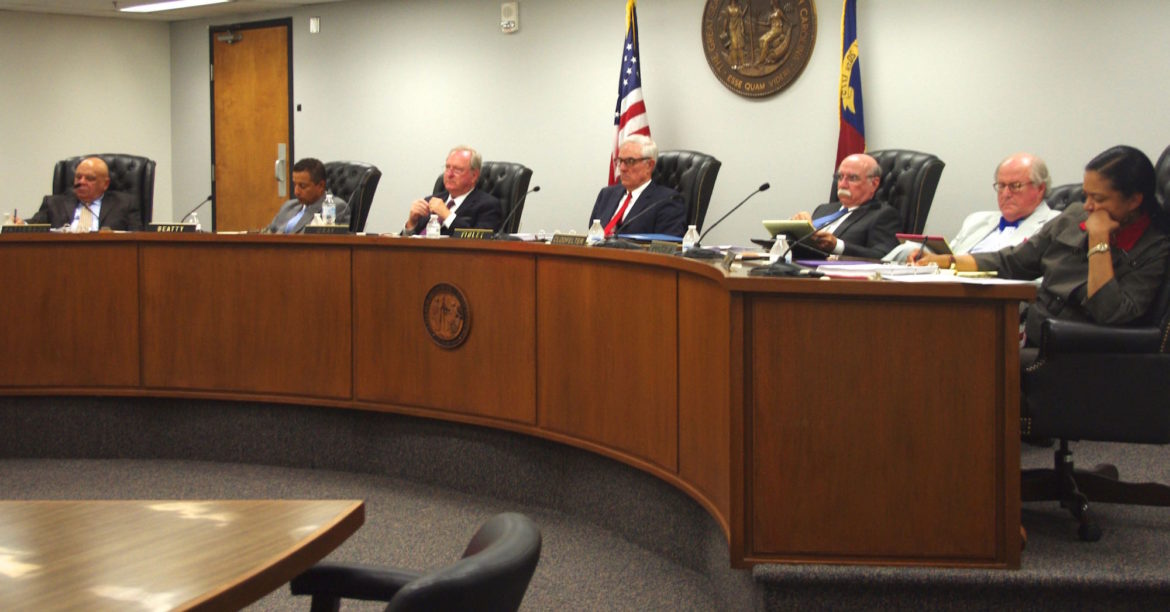 The North Carolina Utilities Commission during a recent public hearing in Raleigh. The replacement for Commissioner Bryan Beatty, second from left, has yet to be confirmed by the North Carolina legislature — which advocates worry could lead to a vacancy during a key rate case.

Unless the Republican-led legislature confirms two appointments to the seven-member North Carolina Utilities Commission this week, advocates say the regulatory body could be short-handed as it considers Duke Energy’s bid to hike residential electric bills 16.7 percent.

Public meetings began last month over proposed rates for Duke Energy Progress, one of two Duke utilities in North Carolina that serves 1.3 million customers. An expert witness hearing in the quasi-judicial proceeding is scheduled for November 20.

Commissioners appointed by Democratic Gov. Roy Cooper must be seated by then to participate in the rate case. Advocates say that creates urgency for the part-time legislature, which meets for a brief special session Wednesday, but isn’t expected to return again for at least two months.

“Neglecting to confirm appointees this week would leave the commission under-staffed for this very consequential case, which will impact nearly every North Carolinian,” said Allison Eckley of the North Carolina Sustainable Energy Association, one of several clean energy nonprofits formally intervening in the Duke rate case.

Residential households could see the steepest rate increase under Duke’s proposal, including an $8 hike in a fixed monthly fee that critics say will harm low-income ratepayers and discourage clean energy.

But the utility wants to raise rates for all customers by an average of 14.9 percent — from large manufacturers, to commercial retailers, to farmers spread across a range of ratepayer classes. They, too, are eager for lawmakers to act.

“Having a fully seated and functioning Commission is crucial to the fairest outcome possible for customers,” said Andy Curliss, CEO of the North Carolina Pork Council.

Clodfelter fills the seat of Don Bailey, a Republican appointee. Mitchell takes the place of Bryan Beatty, who, like Brown-Bland, was appointed by a Democrat. So far, lawmakers have approved only Clodfelter.

And though both Brown-Bland and Beatty can remain on the panel until the legislature acts, stakeholders worry most about Beatty’s seat. Beatty has already begun participating in the Duke Energy Progress rate case, which is expected to last through early next year. If Mitchell is confirmed after the November 20 hearing — but before the commission’s final order — Beatty will leave, and only six commissioners will participate in a decision that could cost ratepayers an extra $477 million each year.

Advocates say the rate case isn’t the only high-stakes item on the commission’s docket, which also includes the implementation of a new law doubling solar capacity and Duke’s proposed $13 billion grid-modernization plan.

“It is absolutely crucial that the General Assembly confirm the two pending …appointees during this week’s special session,” said Eckley of the Sustainable Energy Association.

Since the House and Senate must pass a joint resolution to make legislative appointments and confirmations, they are usually the domain of the chambers’ leaders. The office of state Sen. Phil Berger (R-Rockingham), the president pro-tempore, did not respond to a request for comment.

Joseph Kyzer, a spokesperson for House Speaker Tim Moore (R-Cleveland), confirmed N.C. Policy Watch reporting that appointments bills were on the “short list” for this week.

But he couldn’t say whether the bills would be checked off the list, or whether they would include Brown-Bland and Mitchell.

“They’re still being discussed as potential session items between the House and Senate,” Kyzer said.