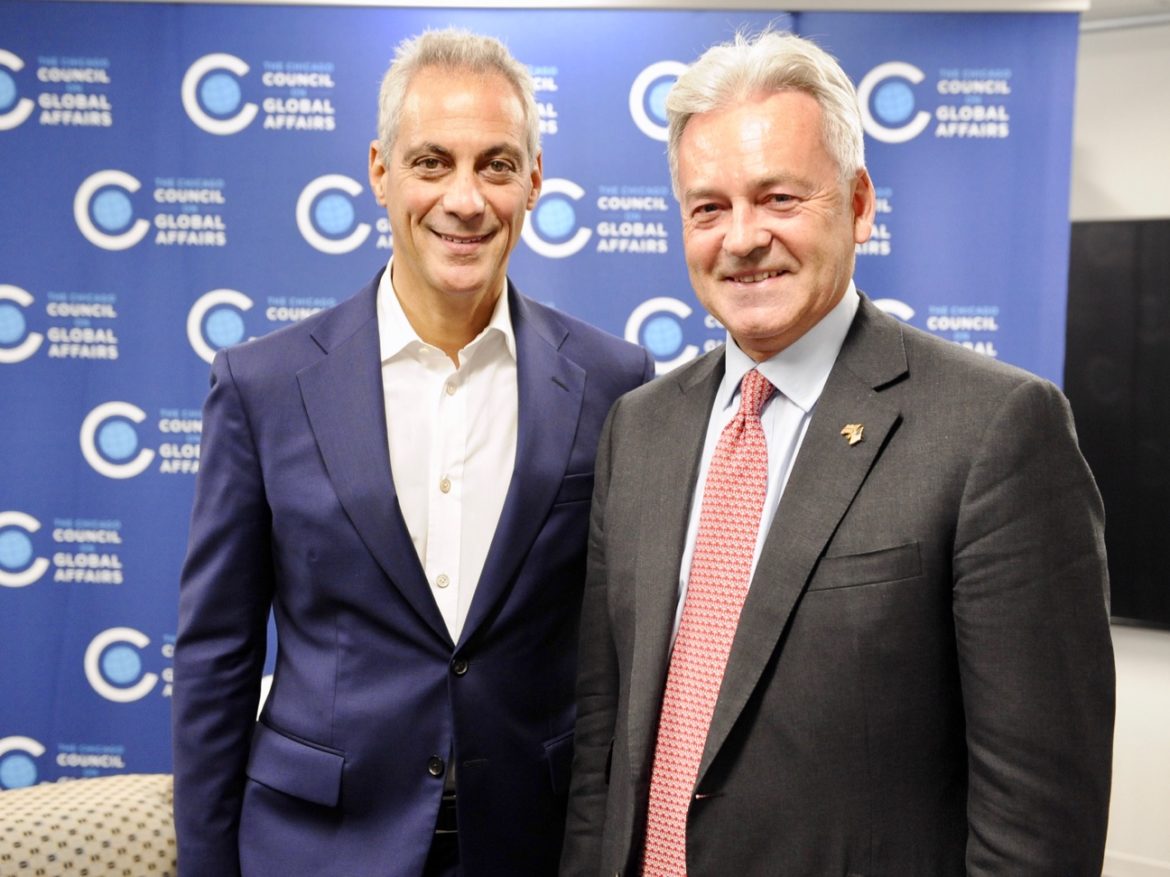 Chicago Mayor Rahm Emanuel, left, during a recent meeting in Chicago with Sir Alan Duncan, the United Kingdom’s minister of state for foreign and commonwealth affairs

For years, there’s been a strong connection between Chicago and the United Kingdom. More Chicago-based companies have expanded in London, the largest city in the U.K., than any other European city.

That relationship, however, has been tested over the past year as the U.S. and the U.K. have adopted isolationist policies — the U.K. in its decision to leave the European Union and the United States pulling back from the Paris climate agreement.

In July — one month after President Trump withdrew the U.S. from the international climate agreement that set emission reduction targets to curb climate change — Chicago Mayor Rahm Emanuel visited the U.K. on a trip to promote trade and maintain the relationship. During that visit, he met with Sir Alan Duncan, the U.K.’s minister of state for foreign and commonwealth affairs.

During his tour, Emanuel said that the trust between Chicago and the U.K. remains strong despite the U.S. withdrawing from the agreement and the so-called Brexit vote.

“London will always be an outward-looking city,” Emanuel said, according to the Chicago Tribune. Duncan has made similar comments about working with Chicago. But what would a U.K. partnership with major American cities look like?

Duncan made his own visit to Chicago this week. The trip was billed as a moment to discuss energy, climate change and plans to bring a delegation of Chicago’s Smart City program to London.

Right now, renewable sources account for 20 percent of energy production in the U.K., and targets set by the European Union have that figure rising to 30 percent by the year 2020. Duncan maintains that Brexit will not change energy policy — “it’s not going to make us dirtier or more emitting,” he said — and the U.K. is breaking renewable energy production records.

Power generation in the U.K. is not an apples-to-apples comparison to Illinois, but there are similarities. In the U.K., a new plan for supporting clean energy technologies is being hashed out through a reform of the electricity market. Last year, Illinois lawmakers passed the Future Energy Jobs Act, and the Illinois Power Agency last week published a draft plan on how it will pay for new renewable production and outlined the new energy program.

Duncan spoke with Midwest Energy News while at the Chicago Council of Global Affairs. This is an excerpt from that conversation.

Midwest Energy News: What will you be discussing with Mayor Emanuel?

Sir Alan Duncan: I’ve met him a few times before, we will be talking about climate change, but also I have no doubt he’ll be asking me about how Brexit is going. I’m pleased to be here in Chicago because it’s such a central part of the U.S. Outside Washington, I get a different view about another part of the U.S., and Rahm’s a great figure. We’ll have a chat about lots of world issues and we’ll sort out the world between us, I’m sure.

On the Paris climate agreement, what’s happening in the U.K., and what ideas are you bringing here?

We’re a signatory and we will honor it and implement the terms and conditions of the Paris deal. We were doing it anyway because we are absolutely intent on lowering our carbon emissions, but also through our Development Aid Budget helping countries which are affected by climate change and which need help not only to survive in the face of many, many more severe weather incidents but also to make sure that their future energy needs are met in a sustainable way, in a low-carbon way. Our .7 percent of national income spent across the world in poor countries focuses quite a lot on exactly that.

‘You can’t isolate yourselves on one part of the world from climate change.’

When President Trump backed away from the agreement, did that change energy policy in the U.K.?

It’s not going to change us, but I hope we can yet use our influence to change him back again. So, we will continue as we did before, as will most major international partners, because climate change is not a nation-by-nation thing. We are literally all in this together and you can’t isolate yourselves on one part of the world from climate change. In a world where there are more hurricanes and more winds and more extremes of heat and cold and drought, we’ve all really got to realize that this is a global issue that affects all of us.

I think one of the opportunities it offers is that states can make a lot of decisions which make a difference within the United States. The U.S. may or may not nominally be like an implementer of the Paris agreement, but lots of states can set a lot of policies and make decisions about how they use power and generate it. How they look at vehicle emissions and things like that. Those decisions can make a massive difference to the U.S. overall.

Are you referring to the Future Energy Jobs Act that passed in Illinois last year?

I’m familiar with it. I hope all states will adopt an enlightened policy on carbon emissions and energy use, and if they do, their joint action can have a massive national effect. Also, if a state does have an enlightened emissions policy it will prove more attractive to investors because companies which invest in the state will be able to sort of promote themselves as ones who are responsible and concerned about the planet generally through the energy policies that they have where they are investing.

Chicago has a strong relationship with the U.K., and there are a lot of Chicago businesses that grow into London. The mayor has made it clear that relationship will continue despite Brexit, and it sounds like a shared sentiment in the U.K.?

Yeah. And in a way, that’s why I’m here and I think the links between the U.K. and the U.S. are not just sort of Downing Street to the White House. They are equally from companies and the United Kingdom in general into states like this and cities like this. And we’ve got consulates across the U.S. who are dealing with trade deals and looking at the economy as the size of many, many countries. And that’s what I’m delighted to see.

Do you have a vision for what a Smart City could look like, and do you have any concerns about how it could impact individual liberties in our cities?

Smart cities has become a label which means different things to different people. But I take it to mean cities which are designed to be energy efficient, ones which use technology and environmental standards to the highest possible degree, ones which can use technology for traffic management and things like that. I think that the label has become a poor label until such time as it is more clearly defined by the people who use it.

Will you do that with the mayor — hash out his vision of a Smart City?

Oh, he’s got clear visions. And that’s why he’s such an engaging guy. I mean he’s very go ahead. And I never fail to learn something when I have a chat with him.