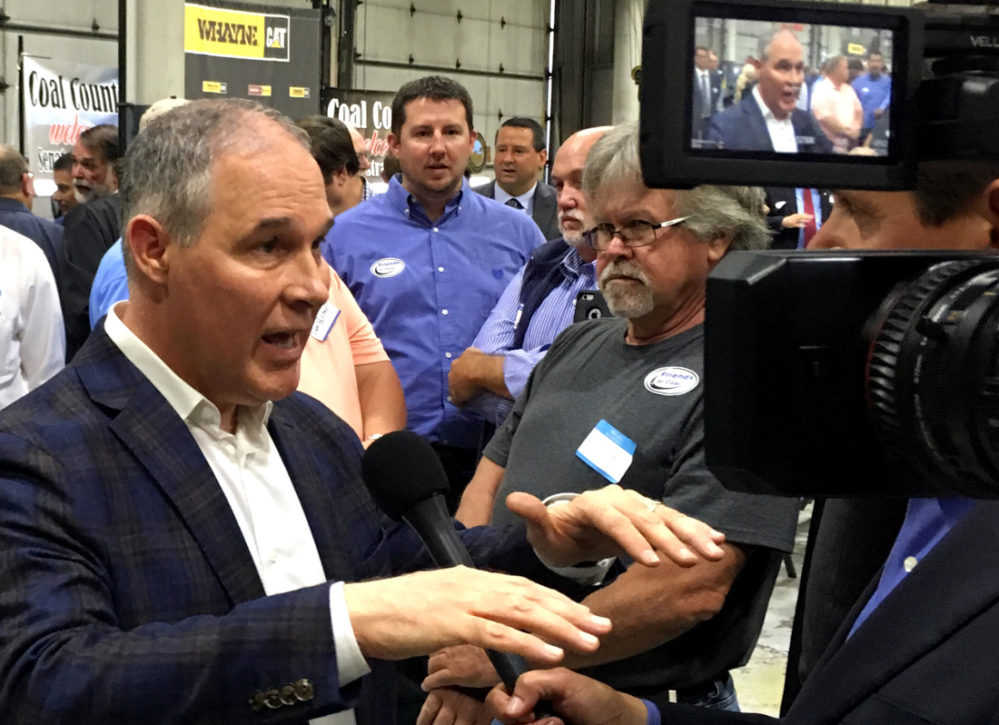 EPA Administrator Scott Pruitt, talks to a reporter after announcing a plan on October 9 to repeal the Clean Power Plan.

Despite Scott Pruitt’s claim that “the war on coal is over,” clean energy advocates say repeal of the Clean Power Plan is unlikely to bring back coal jobs to Ohio or revitalize the state’s coal-fired power plants.

“It doesn’t change the fact that coal-fired power is uneconomic in Ohio right now and that coal plants can’t compete,” said Rob Kelter at the Environmental Law & Policy Center.

“I see the factors that are pushing these plants into an uneconomic space to be completely separate from the Clean Power Plan,” agreed Samantha Williams at the Natural Resources Defense Council.

Those factors include strong competition from natural gas and increased competition from foreign producers. Many coal jobs have also been lost due to more automation in the industry. That trend will continue in the next decade, the Brookings Institution reported last winter.

“We think that the repeal of this will insure that reliable and affordable baseload electricity will be available for consumers across the country,” Bruce Watzman of the National Mining Association told WOSU in Columbus. “The coal industry wants to compete and is willing to compete in a market that doesn’t pick winners and losers,” he added, noting that 27,000 direct jobs “were at risk had the Clean Power Plan come into effect.”

Whatever happens in the courts with the repeal or any replacement rule, delay in climate change action will hurt the state’s economy, health and environment, advocates say.

Among other things, Ohio could have gotten financial support to invest in more renewable energy facilities, Williams said. And the Clean Power Plan would have encouraged yet more investment in that part of the energy industry.

On the health front, Ohio could forego benefits that were forecast under the Clean Power Plan. The rule was “projected to prevent 90,000 asthma attacks, 300,000 missed work and school days, and 3,600 premature deaths annually by 2030,” said Melanie Houston at the Ohio Environmental Council. “Repealing these standards means more sick kids, more expensive hospital visits, and thousands of premature deaths that could have been prevented.”

Indeed, if any EPA replacement rule focused only on control actions inside the fence line at existing power plants, Ohio and other Midwestern states could have even more early deaths from new hot spots of particulate pollution, researchers at Harvard and Syracuse University reported on October 10.

“From a technical standpoint there is no direct impact to Ohio’s renewable portfolio and energy efficiency standards” from repeal of the Clean Power Plan, Houston said. Nonetheless, she added, the EPA’s move will likely “cause more feet-dragging in the transition away from dirty, outdated coal plants and towards renewable energy … It would be incredibly short-sighted to scrap these standards, as House Bill 114 proposes.”

“Even absent the Clean Power Plan being in effect, states remain free to proceed with their own initiatives to cut carbon pollution and would be well advised to do so, given both the importance of grappling soon with the climate crisis and the affordable nature” of cutting greenhouse gas emissions, said Howard Fox of Earthjustice.

Ohio’s General Assembly first adopted the state’s clean energy standards in 2008, well before the Clean Power Plan was even proposed. Compliance with the original standards would have fulfilled most of Ohio’s Clean Power Plan obligation to cut greenhouse gas emissions from the power sector by about a third, Williams said.

In her and other advocates’ view, Ohio would still benefit from the standards by adding more jobs in its energy sector. Last year Ohio had about 2.5 times as many jobs in its solar energy industry as it did in its coal industry in 2015.

“These standards actually paved the way for Ohio to be the leader they are in solar jobs in the region,” Gail Parson of Environmental Entrepreneurs said when that group released its Clean Jobs Midwest report in September.

Advocates also want the state to ease restrictions adopted in 2014, which tripled the previous property line setbacks for wind farm turbines. Two pending bills in the Ohio Senate would accomplish that. Until that happens, new land-based wind farms are “pretty much zoned out,” Williams said.

Whatever happens in the Ohio legislature, delay is likely to continue at the federal level. The Environmental Protection Agency published its proposed repeal on Tuesday, five-and-a-half months after an executive order from Donald Trump. Trump had pledged to repeal the rule during his 2016 campaign.

Any repeal won’t take effect until the 60-day notice-and-comment period ends, followed by more agency consideration. It’s also unclear what, if anything, the EPA will propose and adopt as a replacement rule.

Enforcement of the current Clean Power Plan was stayed by the Supreme Court last year after parties filed initial challenges to it. The EPA will likely move to dismiss the current federal court litigation, although additional litigation will almost certainly follow after the EPA makes any repeal final and promulgates any replacement. The timeline for both actions remains open ended.

Much of the EPA’s repeal proposal reads like a legal brief against the Clean Power Plan. Arguments claim that the EPA’s rule reaches beyond individual power plants’ properties, that the targets can’t be reached with current technologies, and that the benefits of the rule were overstated. A recalculation by Pruitt’s EPA heavily discounts the projected health benefits from the initial rule.

Advocates say that the Clean Power Plan provided states with flexibility for meeting their obligations and did not require any particular generation mix. They also note that the agency’s current position is unreasonable based on how utilities and the modern electric grid operate.

And, they add, recalculation of the projected benefits is inconsistent with how the EPA generally has done its cost-benefit analysis.

Yet even if advocates win after litigation is settled, there will still be years of additional delay. Environmental advocates see that as a big problem, especially because greenhouse gases remain in the atmosphere and continue to affect climate long after their release. Climate change increases the risks for extreme weather. Other climate change impacts will include more harmful algal blooms for Lake Erie, scientists report.

Moreover, a window for starting to reduce the United States’ greenhouse gas emissions from the energy sector could close as early as 2023 to 2026, University of Michigan researchers reported in the October 3 issue of Environmental Science & Technology. According to the report, it will otherwise be infeasible to achieve a 70 percent cut in greenhouse gas emissions from that sector by 2050, making worse impacts from climate change more likely.

“We are way into overtime on climate change, so everything we do now is late,” Doniger said. “But it can always be even later and even worse to delay. So the delay that we’re suffering under Trump is serious, and it’s going to have consequences for our children and grandchildren down the road.”