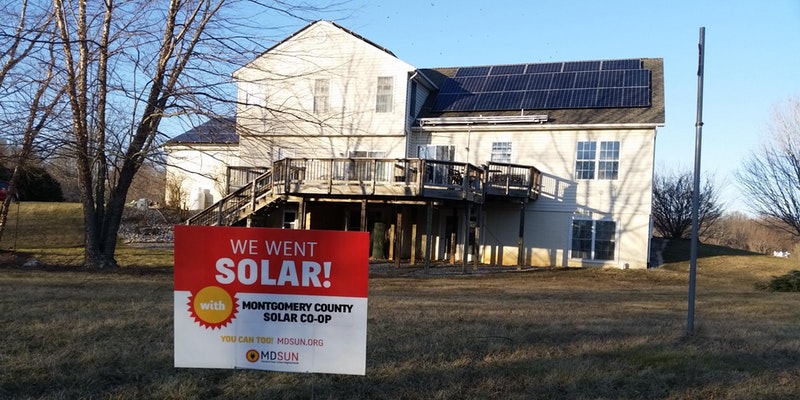 A solar advocate who found a way to create bulk-purchase discounts for home rooftop systems is growing it into a national movement to assert what she feels are the rights of system owners.

What launched as the Community Power Network in 2007 in the Washington, DC, home of Anya Schoolman is expanding under a new name – Solar United Neighbors (SUN). The new organization is targeting, Florida, Pennsylvania and other states by year’s end, with a goal of establishing operations in at all 50 states by the end of 2018.

SUN’s agenda includes defending net metering, educating homeowners about how solar works with electric vehicles and energy storage, fighting utilities’ increases in fixed charges, combating restrictions on rooftop systems by homeowners associations, and advocating for solar tax incentives at the both the state and local levels.

“Our program requires homeowners that either have solar or want solar to be excited about being part of a national organization that represents their interests,” Schoolman said. She explained building influence begins with building an engaged membership.

In 2014, President Obama honored Schoolman at the White House as a “Champion of Change” for her work on group solar purchases.

Erik Curren, a national marketing consultant to solar companies and author of two books about helping win clean energy policy battles, said SUN’s name “will help position it as the leading organization nationwide helping homeowners and their allies fight back against attacks on rooftop solar by monopoly utilities.”

With solar costs declining and utilities pushing back against residential solar initiatives throughout much of the country, other iterations of Solar United Neighbors are emerging.

Smart Power in South Carolina is taking a few pages out of the Community Power Network’s original playbook by organizing co-ops, helping facilitate more than 2,000 installations so far.

Vote Solar has long been a strong voice in at least 8 states advocating for net metering, but not everywhere where some proponents say it’s needed. Vote Solar also doesn’t include a membership service component envisioned by SUN.

“We want to work with all solar organizations, including installers, to help elevate the voices of solar owners and their first-person experiences,” said Ben Delman, SUN’s communications director. “As we grow, we are open to working with other groups that share the same goals.”

Solar United Neighbors has grown to employ 25 full-time staff, 15 of them work out of the headquarters in Washington, DC. The recently launched Florida chapter added its third employee recently and is actively looking for to hire qualified persons in Tallahassee, the state’s capital, and the Florida Keys.

SUN’s expansion, Delman explained, depends in part on issues percolating in various states, what kind of media attention can be drawn to them and how foundations are willing to arm it with the resources to fight.

In addition to tax-deductible foundation grants and individual donations, SUN draws much of its operating income from charging installers that win the request for proposal to serve as the go-to supplier for each neighborhood campaign. Companies selected must pay $600 per installation.

Until now, much of the rest SUN’s funding has come from donations by foundations, large and small. It has started charging $85 for annual individual memberships.

In addition to the group discount, members have access to a virtual help desk about solar equipment, whatever solar problem or issue they face and guidance on how to approach lawmakers and regulators.

“Membership is open to everyone but all services aren’t available to everyone,” Delman explained. “We don’t have the same level of support in all states because their resources and people aren’t there yet. But we’re working on it.”

What Schoolman describes as “bedrock foundations” such as the McKnight Foundation and the Heinz Foundation are enabling it to launch into new states. She attributes much of her fundraising success to the unique niche role that SUN is now beginning to serve nationally.

SUN is drawing on the organizational model provided by the American Automobile Association – AAA – as it prepares to set up shop in Pennsylvania, Minnesota and New Jersey.

Demonbreaun said since July 2016, the SUN chapter in Florida has organized 16 group-purchase co-ops.

In other states, Delman said, SUN is offering “founding memberships” to advocates who are especially motivated to help launch full-service programs there. “If or when a state reaches 3,000 founding members, we would have the base of support needed in that state to expand our full offerings there,” he said.