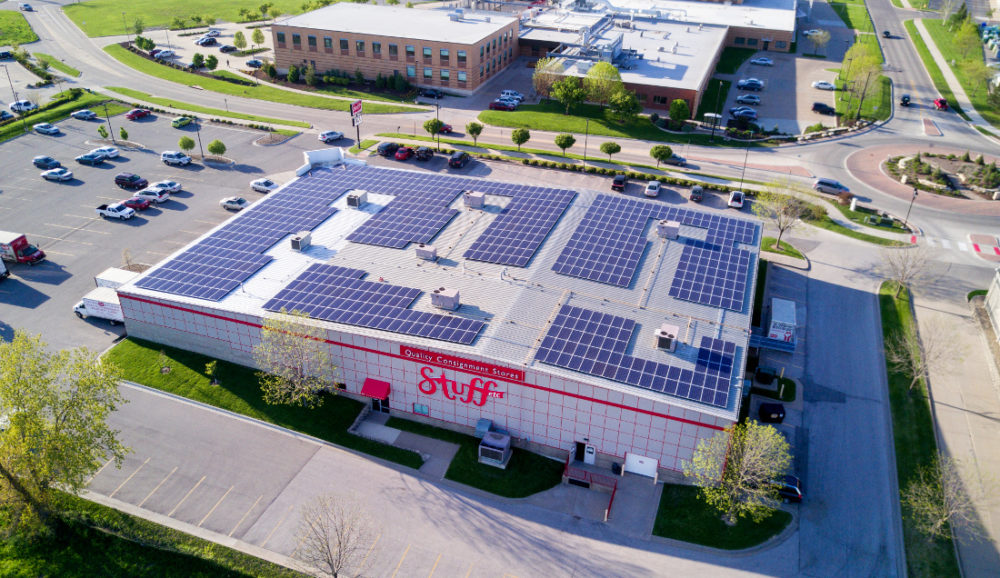 (Editor’s note: This story has been updated to correct a pair of technical errors)

In Iowa, a state with some of the highest demand charges in the nation, a solar installer is offering a storage solution that the company claims could cut power bills in half for some large electricity customers.

One year ago the company, Ideal Energy, installed its first solar-plus-storage system at Stuff Etc., a large consignment store in Coralville.

Amy Van Beek, the company’s co-founder and its chief marketing officer, said the project has been performing well and the company is now working with several large electricity customers in the state to determine how solar-plus-storage could work for them.

“We’re rolling this technology out in a big way in Iowa,” said Robbie Gongwer, a senior energy consultant with the company. This morning, Ideal Energy will share its story and its vision at a public event that Gov. Kim Reynolds is expected to attend, along with a representative of the Solar Energy Industries Association.

Although Iowa’s generally low electricity prices can detract from the economics of solar power in some cases, Gongwer said that the high demand fees charged by some of Iowa’s utilities can improve the economics of storage for some customers.

According to a National Renewable Energy Laboratory survey gauging the number of commercial customers in each state estimated to be eligible for utility rates that include demand charges of at least $20 per kilowatt, Iowa rated tenth. The report, published in August, put the number in Iowa at about 23,000 electrical customers.

Some utilities charge hefty demand fees on customers whose need for power roller coasters up and down, and a momentary spike in demand can trigger a very high fee for the customer. Utilities generally defend high demand fees because, they say, they must maintain enough capacity at all times to meet the high peaks. The fees for that capacity can amount to half of a customer’s bill, according to Gongwer.

With storage, “you can perform peak shaving where you are not covering a large chunk of an electric bill,” Van Beek said. “If we can hit enough of their peak, even if we’re just covering 8 to 10 percent of overall use, that can be enough to have a good impact on their utility bills.”

Van Beek said technology has advanced to the point where a storage system can learn a given customer’s cyclical need for power. After monitoring a system’s power use for some time, the storage system can anticipate when power use is about to spike, and it flips on the battery, thus keeping the demand on the system low enough to avoid demand charges.

“The system figures out the best time to recharge and when to discharge,” Van Beek said. “They are highly intelligent.”

“Demand charges are a great way for storage systems to work, said Matt Roberts, vice president of the Energy Storage Association. “I’ve seen this in hotels in San Francisco and New York. They know when rush hour is. When the elevators are going to be busy, the battery is waiting. When someone pushes the button, the battery kicks in so your demand doesn’t exceed a certain level.

“They can write a contract that says, for example, ‘You’ll never go above 6 megawatts (of demand).’ In places with demand charges, it’s a really smart model.”

Van Beek said that she expects that customers with demand charges would find that the solar-plus-storage system they are getting ready to market will pay for itself in four to six years.

The owner of Stuff Etc., where Ideal Energy installed its first and so far only solar plus storage system, wanted to generate all of her own electricity. She also was angling to reduce the store’s demand enough to avoid the demand fee, according to Troy Van Beek, one of the founders of Ideal Energy.

The solar/storage system has enabled the store operators to keep their demand below 75 kW throughout the year, meaning that they no longer have to pay a demand fee, he said.

Although batteries can be useful in several ways, Gongwer said that Ideal Energy now is focused on using them to erase demand fees from electricity bills.

“It’s not for every project,” he pointed out. “It takes an energy study to see if this would be good fit. For customers that do have the right profile, it really, really makes a big difference.”