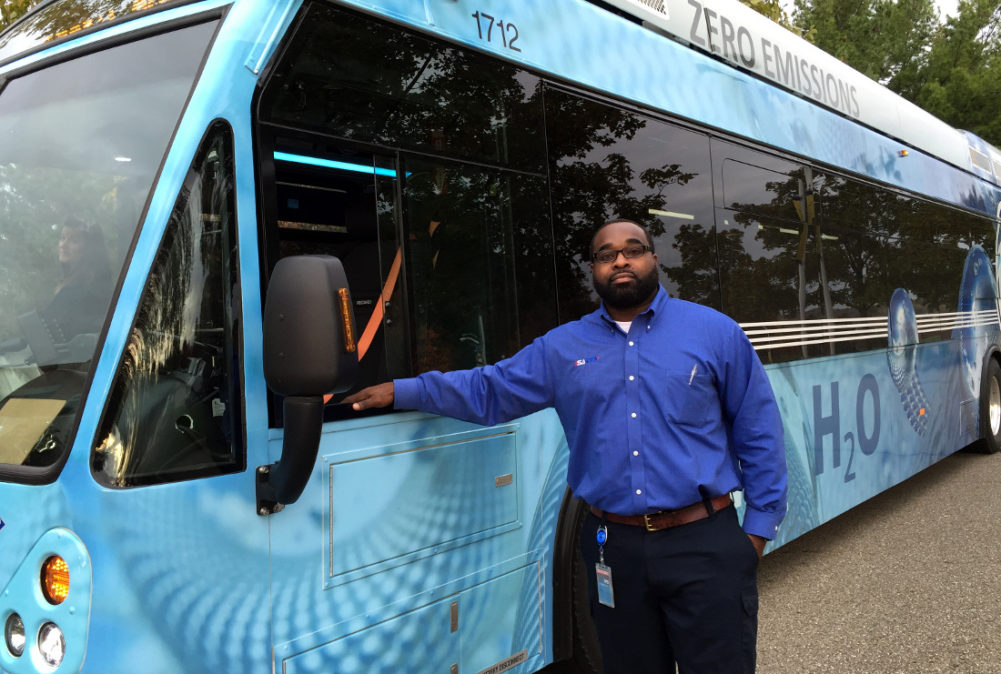 Eric Bigelow proudly stands beside the fuel cell bus he drives for the Stark Area Regional Transportation Authority in Ohio.

Industry leaders who met in Canton, Ohio last week are optimistic about the future of fuel cell buses and say the fuel cell industry could add 65,000 jobs for the Midwest by 2032.

“We see this fundamental change in transportation occurring from a job perspective and also from a technology perspective,” said Kurt Conrad, head of the Stark Area Regional Transportation Authority in Canton. SARTA rolled out the first fuel cell bus in Ohio last year. Its most recent order will bring its fuel cell fleet up to 13, Conrad reported.

A fuel cell combines hydrogen with oxygen from the air to produce electricity, water and heat. In a fuel cell bus, electricity from the reaction drives the vehicle’s power train. Some systems can also use the waste heat for interior temperature regulation of the bus as well.

The second North American Fuel Cell Bus conference on November 2 and 3 featured industry speakers from the United States, Canada and Great Britain, along with government representatives from the Department of Energy’s Fuel Cell Technologies Office, the Federal Transit Administration and the National Renewable Energies Laboratory. The Atlanta-based Center for Transportation & the Environment organized the event.

The technology offers advantages over battery-electric buses and other options, but costs remain high – something backers hope will change as production increases.

Although only a few dozen fuel cell buses were on U.S. roads in 2016, other countries are more aggressively adopting the technology. One European Union project will place 139 fuel cell buses in nine European cities. The Foshan and Yunfu areas in China plan to have about 300 fuel cell buses. And South Korea announced last year that the country will eventually replace about 26,000 compressed natural gas buses with fuel cell buses.

“These things are happening,” Conrad said. “What I’m trying to do here is help Ohio so it can be in a leadership position.”

Concerns about climate change are one big factor in SARTA’s support.

“Transportation has overtaken energy production as the largest emitter of CO2,” Conrad said. “If we really want to reverse or change those trend lines, we have to move transportation to a zero emission platform. Ultimately that’s what we have to do.”

“You don’t want the emissions of the bus,” stressed Andrew Rezin, who heads the Midwest Hydrogen Center of Excellence in Columbus. “Global warming is having a cost already.”

Fuel cells still rely on fossil fuels to some extent, because most hydrogen fuel today comes from reforming natural gas. But that chemical process is much more efficient than burning natural gas itself as a fuel, Rezin said.

Renewable energy or other sources of electricity can also supply hydrogen fuel by hydrolysis. That process causes water to split into oxygen and hydrogen ions, and the hydrogen ions then move selectively a solid membrane made of a specialty plastic material. So fuel production can switch to other sources of energy as their costs continue to come down, or as and when natural gas prices climb, Rezin said.

Production facilities that currently use natural gas can be readily switched to other energy sources to make hydrogen fuel, said Chris Kretz of Air Products and Chemicals in Allentown, Pennsylvania.

So far, the reliability data for fuel cell buses looks good, reported Leslie Eudy of the National Renewable Energy Laboratory in Colorado. Multiple buses on the road through this summer have already passed the Federal Transportation Act’s interim performance target for 2016, she said. And one has already passed the “ultimate target” of going 25,000 miles without needing a road call for its fuel cell equipment.

“Today fuel cell buses are operating like any other buses on the road in the U.S., in Europe, in China and in Japan,” said Nico Bouwkamp of the California Fuel Cell Partnership. The buses have “proven they’re reliable and they can deliver the same level of service as any other conventional buses.”

“The range today is about 340 miles” between fueling, Bouwkamp continued. And unlike battery-powered electric buses, “you don’t need a downtime of ten percent every hour to recharge a bus. It’s really a true one-to-one replacement of a conventional diesel bus.”

Unlike a battery-powered bus that carries stored electricity, he and others added, a hydrogen fuel cell bus makes its electricity as a bus drives. So unlike a flashlight that dims as the batteries run down, the current stays fairly stable as long as there’s hydrogen for the fuel cell reaction. And, they said, the weight of hydrogen fuel is a lot less than that of electric batteries that would be needed for large loads or longer ranges.  Additionally, parts of the fuel cell can be reused to make new fuel cells, Bouwkamp said.

Most speakers stopped short of saying that fuel cell vehicles would completely displace battery-powered buses or other alternatives.. “We think we need a suite of technologies to achieve a sustainable transportation system,” said Justin Ward of the Toyota Technical Center in York Township, Mich.

“For the Midwest the big win [in supporting fuel cells] is jobs,” Rezin said. “Those of us who are in the Midwest know that transportation is the lifeblood of the economy. That lifeblood if it transitions to hydrogen fuel cells can grow. If it doesn’t, it will wither and die.”

A report released by SARTA this summer projects that, with supportive public policies in place, the fuel cell industry could directly support 65,000 jobs in the Midwest by 2032. That’s well above the 51,900 total U.S. employment in coal mining as of October 2017.

“We need to get costs down…. And one way to do that is economies of scale,” said Sunita Satyapal, head of the Department of Energy’s Fuel Cell Technologies Office.

Industry representatives agreed that the price tag needs to come down for fuel cell buses and felt that mass production would make that possible. If that can be done, they argued, then maintenance costs, quick fueling time, extended range, fuel costs and other factors would let them compare favorably with alternatives such as battery-powered buses.

Speakers took a similar view of the costs for fueling stations. “Think about scale from the start,” suggested Ben Madden of Element Energy in the United Kingdom. Instead of considering the costs for one or two buses, he said, look at the commercial case for 20, 30 or 40 buses.

As fleets add more fuel cell buses, more technicians will need to know how to service them. “We want to see [improvements] in the learning curve for maintenance…and have just a standard process,” Eudy said.

Satyapal also talked about the bigger role that hydrogen could play in the energy sector, including its potential for energy storage. For example, intermittent sources such as wind energy could power the production of hydrogen fuel during periods of excess production. That hydrogen could then run fuel cells to supply electricity when needed for the grid.

“In addition to renewables, we’re also hearing from nuclear plants,” she said. Some of those plants hope to produce hydrogen fuel during off-peak hours, she explained.

Hydrogen “allows you to decouple the grid and energy production in unique ways,” Satyapal said.