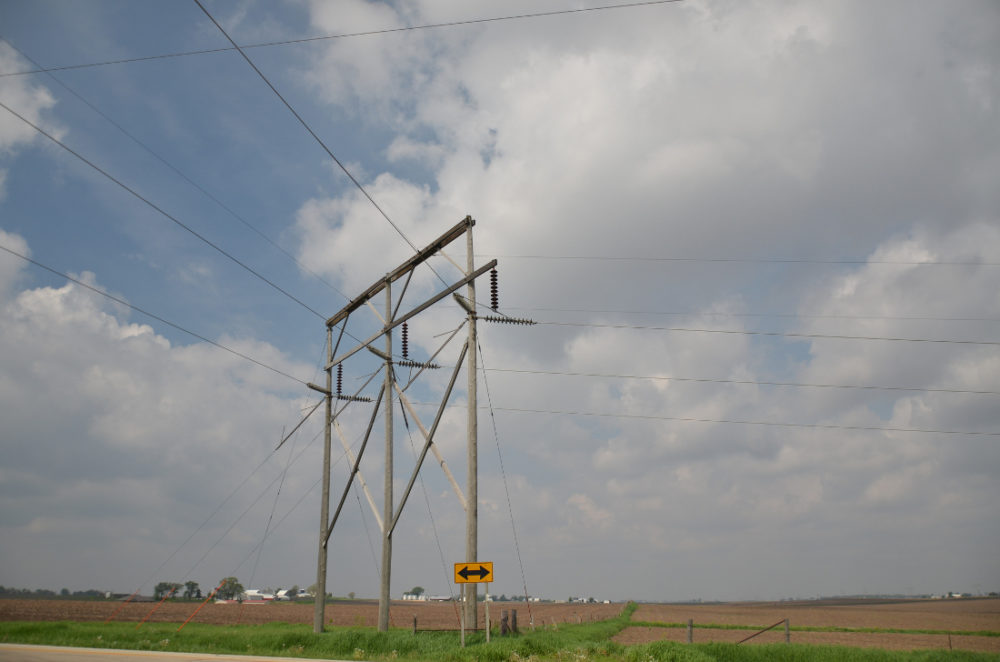 A power line in rural Iowa.

One of Iowa’s two major utilities wants to spend – and charge its customers – nearly $1 billion over the next several years to modernize its grid, and advocates want to ensure that money is spent wisely.

Interstate Power and Light has indicated it likely will seek to include the cost of grid modernization in its rate base over the next few years. Because these types of capital investments earn utilities a high rate of return — typically around 10 percent in Interstate’s case — the incentive is strong to build infrastructure regardless of how urgently it’s needed.

“That is our concern,” said Brad Klein, an attorney for the Environmental Law & Policy Center who has filed comments about the case with the Iowa Utilities Board. “We don’t know if that’s at play in this case, but they don’t have a plan in place to ensure that wouldn’t happen.”

Sonia Aggarwal, an energy policy consultant who has written about effective approaches to grid modernization, said, “There’s a justification for good grid modernization plans. I think what’s so appealing about grid modernization is there’s something in it for everybody. The utility can earn a rate of return. There are real modernization needs that need to happen in the distribution system if it’s going to contribute more flexibility as we de-carbonize. There’s a cyber-security side of it also. And there’s also a resilience and reliability part of it.”

But the potential payoffs notwithstanding, she said, “Without defining what you want out of them initially, you might get more spending from (investor-owned utilities) than would be efficient.”

Klein said he expects that costly but loosely structured grid modernization proposals “are going to increasingly be an issue in utility rate cases.

“Utilities all recognize that electricity use is flat or decreasing, so they are looking for ways to address that revenue gap. I think many utilities are looking to investments in the grid as a place where they can increase their rate base and earn a return for shareholders.”

The term “grid modernization” doesn’t have a clear definition, but generally is associated with system upgrades that would tend to enhance energy efficiency and the use of a wider range of distributed energy resources.

Interstate spokesman Justin Foss defined it as “finding new technologies and tools that will help us provide safe, reliable power to help continue to grow clean energy in Iowa, to enable new options for customers. A lot of that is still being determined by our engineers.”

Interstate already has been making those types of investments, Foss said. The company has begun upgrading primary distribution lines to 25 kilovolts, he said, which will give the company more flexibility to move new distributed generation that might come on line.

“As we see more two-way power flow on the grid, we can run into constraints,” he explained. “As we continue to upgrade to 25 kV, it’s like building a bigger highway.”

The company also is interested in installing smart meters throughout its territory.

Iowa’s Office of Consumer Advocate, as well as a group of clean-energy proponents including the Environmental Law & Policy Center, have urged the Iowa Utilities Board to carefully scrutinize Interstate’s grid modernization plans as they take shape in the coming months.

Interstate’s proposal — $300 million yearly for several years — “is a lot of money,” observed the state’s consumer advocate, Mark Shuling. “Is it needed? I don’t know. That’s why we want more discussions. That’s why we’re saying to the board, ‘Direct this. Be aware that we’re concerned that not enough information is getting out pre-construction.’”

Schuling said that Interstate made promises once before, but didn’t keep them.

“This is not occurring.”

Several other Midwestern states have begun to pursue grid modernization, and they provide examples of an effective way forward, according to Klein.

He said Michigan regulators required the state’s two largest utilities to provide a detailed plan that outlined grid modernization projects, goals and metrics for the program, and a cost/benefit analysis describing consumer benefits.

This type of detailed planning “has not happened yet in Iowa,” he said.

Aggarwal, the vice president of Energy Innovation, said that “some exciting work on the part of public utilities commissions in some parts of the country are helping to lead on this. In Rhode Island, they’re thinking systematically about how to modernize the grid via a combination of performance-based regulation and distribution system planning. I think they’re working closely with National Grid to figure out how to do this in a way that is of the greatest benefit to the customer.”

California’s regulators “have asked the utilities to do some mapping of systems to understand which distribution feeders are ready to accept more DG resources, and which are strained and could use some investments. That’s a nice place to start, understanding the current state of the distribution system, and to look comprehensively at what the solutions are, not just substation upgrades, but what DER resources could do that would be cheaper.”

As stated in a paper that she published early this year with Mike O’Boyle, Aggarwal said, “Our big message about grid management is that right from the beginning of the conversation, it’s really important to get stakeholders from a lot of corners together to talk about what they want get out of grid management, and to define it quantitatively. So when a utility makes a plan, it will be oriented around achieving those outcomes.”