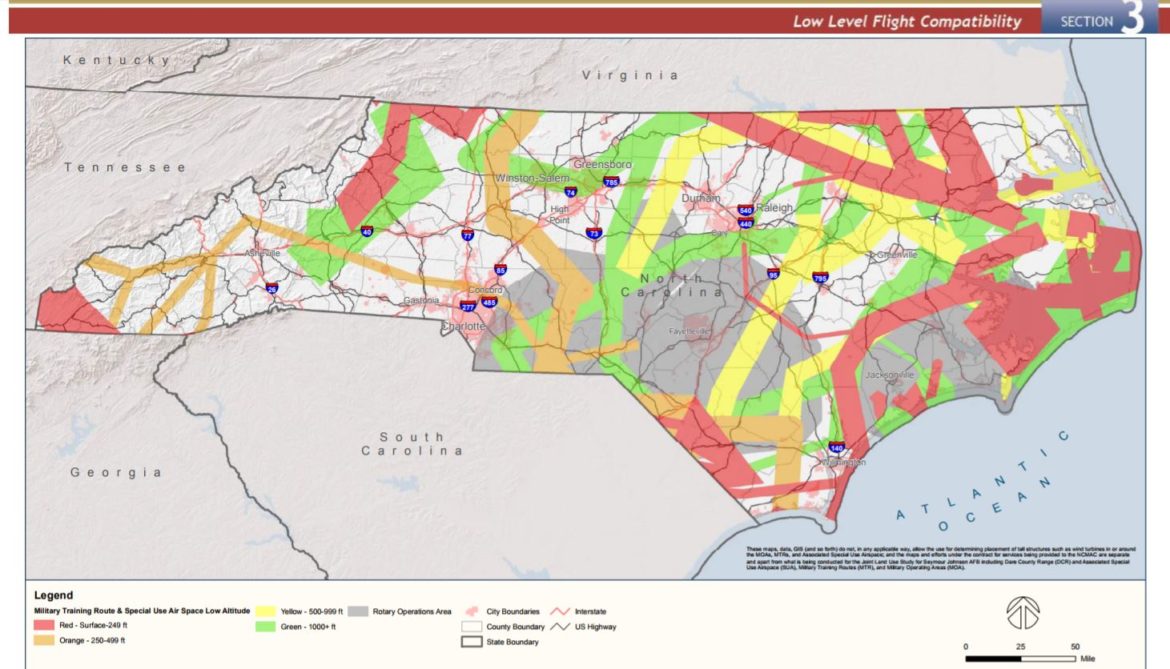 A North Carolina agency produced a set of maps in 2016 outlining military activities in the state; advocates say this and other existing provisions already prevent conflicts with wind turbine siting.

In the latest chapter in a years-long controversy, the North Carolina General Assembly has moved a step closer to a controversial suite of maps that could determine the future of wind energy in the state.

On Friday, the legislature made public its $110,000 contract with AECOM, a global engineering firm with an office in Morrisville, to chart the areas of the state where wind turbines could interfere with military bases. The study – which must be completed by next May – is part of an 18-month moratorium on wind farms enacted in July.

Critics, however, say the maps are duplicative and not needed. And though many had hoped their creation would be open to the public like other legislative studies, officials in charge of the AECOM contract say that won’t be the case.

“AECOM receiving this contract is the latest step in an entirely unnecessary and inappropriate exercise some in the [legislature] are using to over-regulate wind power,” said Katharine Kollins, president of the Southeastern Wind Coalition.

The maps are the brainchild of Sen. Harry Brown (R-Onslow), who hails from windy eastern North Carolina and has sought to restrict wind energy through his seven terms as a state legislator.

Brown, whose district includes the largest Marine base on the East Coast, believes the turbines could interfere with military radar or flight routes, and cause Department of Defense officials to close, downsize, or relocate military installations to other states. The solution, he says, is a statewide map that will rule out wind energy in certain places.

“The map says it’s okay here, it’s not okay here,” Brown told Southeast Energy News this summer. “To me that’s the only way we’re ever going to be able to resolve this issue.”

Critics counter that a 2013 state law already prevents any wind farm that would “result in a detriment to continued military presence in the state.” And no active-duty military leaders have endorsed Brown’s position.

Tad Davis, a high-ranking military official in charge of energy issues, told Southeast Energy News recently he didn’t want to weigh in on the latest law in North Carolina. But during a keynote at a recent conference in Wilmington, he stressed two existing federal mechanisms for ensuring harmony between bases and wind energy.

First, the U.S. Department of Defense Siting Clearinghouse must certify new wind farms or other renewable projects won’t have an “adverse impact on military operations and readiness.”

“It’s not just the wind turbines, it’s also photovoltaics and other projects that are out there,” Davis said.

He also highlighted the Joint Land Use Study process, in which base commanders and other military personnel work with county commissioners, local chambers of commerce and others to ensure planned land use is compatible with a given military base.

“These joint land use studies are very important efforts,” said Davis. “Right from the beginning they start to engage the local communities.”

The studies are typically conducted over the course of many meetings and several months, and the final product usually includes detailed maps highlighting areas of potential conflict – from housing developments to wind turbines.

The two bases Brown most frequently sites as at risk of closure or downsizing – Seymour Johnson Air Force Base and Marine Corps Air Station Cherry Point – have completed such studies in the past two years.

What’s more, in March 2016, the state’s Military Affairs Commission produced its own statewide atlas of flight paths and potential areas of conflict.

But those maps, says Brown, are incomplete. “The money that we put in the budget will complete that map and make it pretty sound,” the senator said this summer.

‘No recommendations – only maps’

The legislature’s RFP instructs the contractor to incorporate existing maps like these into its analysis. Since the firm Matrix Design Group performed two of these studies, many assumed it would apply for and win this latest contract. The company, however, was not among the five firms who submitted a bid.

AECOM could just as easily build off the prior maps, said Chuck Hefren, the non-partisan legislative staff member who wrote the RFP and will administer the contract.

“They were the most qualified and they were close to the lowest price,” Hefren said. “It really wasn’t that close. They understood the job. They had the access to the military people.”

AECOM’s application lists experience with Joint Land Use Studies around the country, and says it has “successfully executed projects” with Cherry Point, Seymour Johnson, and other military bases in the state.

Typically, policy studies are the domain of legislative study committees, made up of elected officials whose meetings are open to the public by law. The wind study is different.

While AECOM must meet with an array of public officials to complete its work, these “required consultations” are not subject to open meetings law, according to Paul Coble, the Legislative Services Officer who oversees Hefren’s division.

And while the law does call for “findings and recommendations, if any” as well as maps to be submitted to Coble by May of next year “in order to inform the development of policies…during the 2018 Regular Session,” Hefren took the narrowest interpretation of the law.

“Only maps. No analysis, no recommendations. I try to be extremely clear with everybody on that,” said Hefren. “They’re going to use them for something – my whole thing is I’m only producing them.”

The “something” is the fear among clean energy advocates, who worry Sen. Brown will seize on the maps next May to promote another blanket wind ban across the state, just as he has in the past.

“No matter who creates the map, he’s going to make of it what he wants,” Kollins of the Southeastern Wind Coalition said of Brown.

And because AECOM is supposed to produce maps that show potential conflicts with “solar systems” and “biomas [sic] power generating plants,” as well as wind turbines, advocates worry they could be used to restrict more than just wind power.

“The breadth of the RFP did catch our eye,” said Chris Carmody, head of the North Carolina Clean Energy Business Alliance, a trade association. “It touched on any sort of other energy that might have had a negative effect.”

But until May, advocates can do little but wait. “It’s a big fish for us,” said Carmody. “But it’s not yet on the fire.”