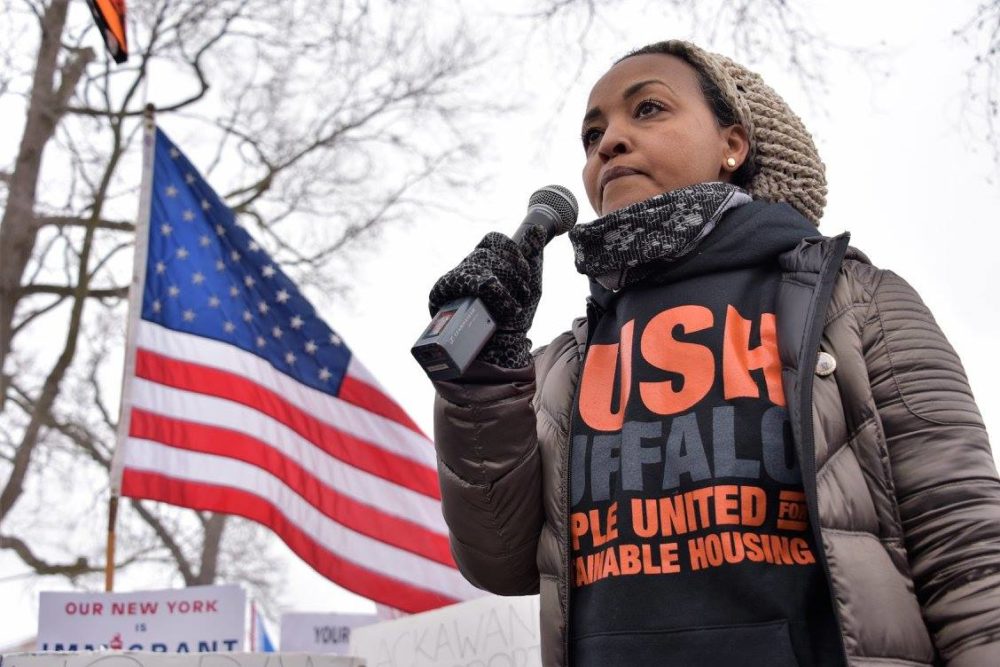 Rahwa Ghirmatzion, deputy director of PUSH Buffalo, will be speaking in Ann Arbor, Michigan this weekend.

If the people living in a poor neighborhood in Buffalo, New York can leverage clean, efficient energy to turn their community around, so can neighborhoods in the rest of the Rust Belt.

That’s the message I’m bringing to Ann Arbor for a North American Students of Cooperation (NASCO) meeting this weekend. As Midwest cities that once fueled the nation’s industrial economy struggle to chart their future, keeping the focus on people and the planet opens the door to a healthier, more equitable, more prosperous future.

I work with PUSH Buffalo, in the heart of one of the poorest big cities in the country, right up there with cities like Cleveland and Detroit, where factory jobs have waned and new jobs have not arisen to take their place. Our efforts center on a 25-square-block area we call the Green Development Zone. When we set up shop in 2006, the average family of four earned $12,000 to $19,000 per year, and lived in expensive housing. Because of Buffalo’s tough winters and beautiful but old and drafty housing stock, most of the neighbors paid more for utilities than they did for rent! On top of that, good local jobs were limited. So people felt stuck. They felt like they could never get ahead.

We asked the people what they needed most. They said they needed quality, affordable housing and good jobs. They said energy poverty — struggling to pay all your bills because the cost of energy is so high — was a major problem. That’s a problem familiar in Midwest cities like Detroit, where one recent survey found almost 27 percent of low-income houses fell behind on utility payments, while another seven percent had their utilities shut off.

Reducing energy poverty was where we started. We began working with community members to weatherize hundreds of homes and save families much-needed money. The people doing this work live in the community. They get job training and earn good wages in the growing clean energy field.

Making houses more energy efficient was a simple but effective first step: residents joined together to address a problem, and saw a real difference in terms of lower bills, better housing, and access to good jobs. They saw that they could own the solution to their problem, and build themselves a better future.

Over the past eleven years, neighbors living in the Green Development Zone have worked with PUSH Buffalo to buy 120 properties, renovate and rent out dozens of affordable apartments, and weatherize hundreds of homes.  We have restored vacant lots, put in green infrastructure, set up a hiring hall, and built a busy youth center.

One home — once abandoned and filled with garbage — has become our region’s first net-zero house, creating as much energy as it consumes each year.  Forty-three people from the neighborhood have worked there, training on the latest energy technologies including a geothermal heating system and a solar thermal hot water system.

Now we are looking toward solar energy, with a vision of clean energy for all of Buffalo’s people. Despite the cold and the snow, Buffalo enjoys as many sunny days each year as does Fort Lauderdale, Florida. Our first community owned, community shared solar project is at an abandoned school. We’re turning it into affordable housing for seniors, plus an all-ages community center. And while we keep our eyes on building a better Buffalo, we are also reaching out to allies across our state, working for policies that encourage community solar projects and other pathways to clean, efficient, affordable energy.

As changes in technology, markets, and business models rock the energy business, I think of our work in Buffalo as a living example of what a just transition to a sustainable energy economy might look like — and an example Midwest cities can learn from. As the world moves to more efficient, renewable, distributed energy sources, communities can benefit from lower bills and new career opportunities. Instead of some far-off corporation controlling how energy is made and used, neighbors can make their own decisions, and profit from them in a variety of ways that build up their community and the economy while protecting the environment.

We are creating do-it-yourself pathways to employment in the growing clean energy sector, all while expanding the stock of efficient, affordable housing, and strengthening our city.  We welcome Midwesteners to come visit PUSH Buffalo, steal our best ideas, and see what your city’s future can look like when people work together to create real hope for the future.

Rahwa Ghirmatzion is deputy director of PUSH Buffalo, which is a local membership-based community organization fighting to make affordable housing and a just transition to clean energy a reality.