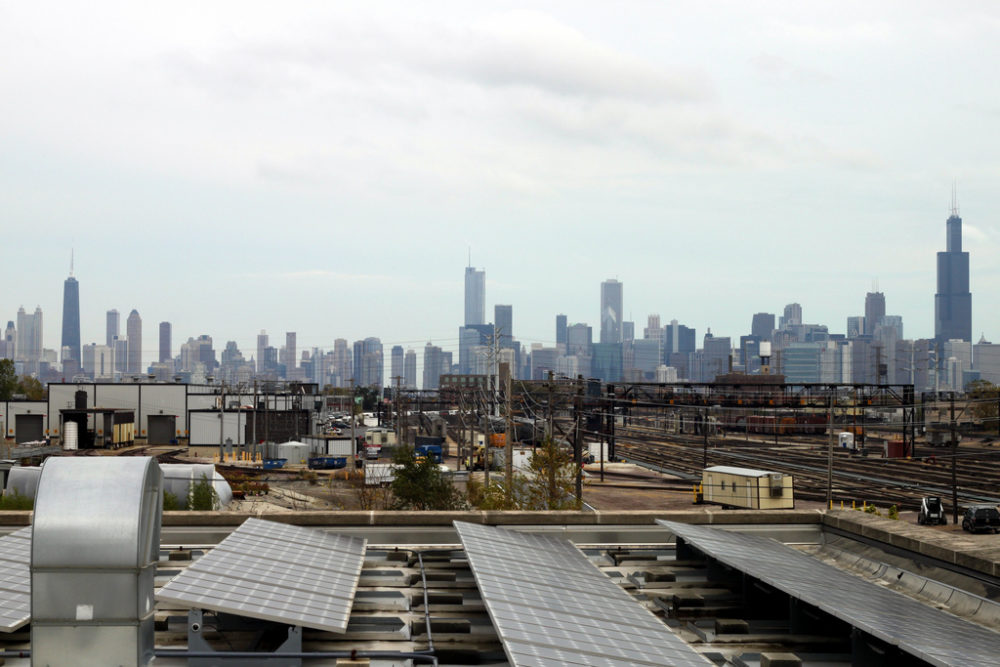 Solar panels at the Chicago Center for Green Technology.

While rural cooperatives around the Midwest have been quick to adopt community solar, officials in the Chicago area want to bring it to the city.

The work, funded by federal grants, seeks to determine whether the model can be viable in a dense urban area like Cook County, which encompasses Chicago and many of its suburbs.

“We want it to come here,” said Deborah Stone, chief sustainability officer for Cook County. “Community solar doesn’t all need to go to very remote greenfield sites. We think that these pilot sites will go ahead, and we’ve provided a tool kit we hope will give these urban sites a leg up.”

Community solar enables people to buy a share of a project without owning their own array, which Stone says is ideal in an area like Cook County where three quarters of homes aren’t suitable to host their own panels.

While some critics question whether a lack of available land makes cities suitable for community solar, K Kaufmann, communications manager for Smart Electric Power Alliance, said that there are successful programs in cities and in small towns and the issue is less about siting and more about how the program is designed and who the customers will be.

“The success of any community solar program starts with knowing who the customers are and then designing the program from there,” Kaufmann said. “In a city, having short-term contracts or a pay-as-you-go business model might be the way to go.”

Kaufmann added that co-ops have been successful because they are member-owned and usually the board members are local citizens. “They are very tuned into what their customers want,” Kaufmann said. “They don’t have to go through the big regulatory processes like ComEd might have to do. They can try things out, experiment with something small and add to it and change it.”

Cook County officials have considered who the customers might be. Each of the 15 case studies detailed in the Cook County analysis include financial models if a project were to be host- or developer-owned.

The only location that didn’t have a strong economic case to be made was a small apartment complex, and that was because of logistics on the site. “I was actually surprised that we didn’t have more sites where it didn’t work,” Stone said.

Are the community solar goals realistic?

Illinois’ Future Energy Jobs Act mandates that 400 MW of community solar be built by 2030, and officials project that as much as 600 MW could be built across the state. Cook County officials found there are currently no projects in Chicago and few projects in the state.

The incentives are frontloaded, and state officials hope that 300 MW will be built by 2021 — an ambitious goal, according to Nick Esch, senior research associate at Smart Electric Power Alliance.

“In terms of feasibility, that is not unheard of — if there is customer demand. If you design your community solar programs based on what customers want, I don’t see it as unfeasible, particularly with a Midwest market that has the potential to grow rapidly,” Esch said.

Stone and other Cook County officials performed an outcome analysis that detailed an energy credit pricing structure that they believe would make community solar competitive.

Cook County officials say that community solar can be economically viable on many different types of sites — such as public housing, parks, libraries, churches and high schools — while generating 10,000 new construction and 177 permanent jobs, $1.39 billion in investment over the next three years, reducing 3.28 million metric tons of carbon and saving subscribers $1 billion over the next 25 years.

Cook County Board President Tony Preckwinkle celebrated the assessment, saying the county “is firmly committed to the fight against climate change. Community solar is an important component of making all of our communities sustainable while providing jobs and savings to our residents.”