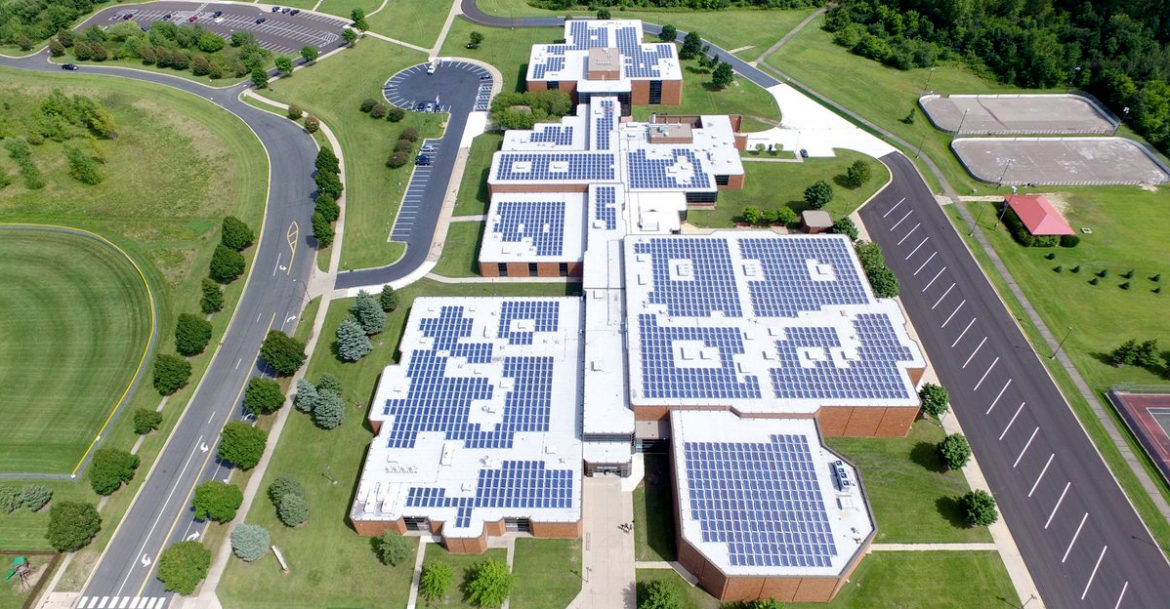 The Farmington public school district’s 3.1 megawatt (MW) project places photovoltaic panels on the rooftops of several buildings. The first project to go live is the 715 kilowatt, 2,200 panel installation on the roof of Dodge Middle School, with more buildings to follow.

Once fully completed next year, the project will be one of the biggest rooftop solar photovoltaic installations ever built in Minnesota by a government entity.

The initiative represents an increasing investment in solar energy by a growing number of schools in the state.

“Schools want to demonstrate leadership in creating a better future for their community and the students going to their schools, and there’s a huge educational component in solar energy,” said Jon Kramer, CEO of Sundial Solar, the installer on the Farmington project.

“They want kids to develop an appreciation of clean energy. And they’re going to save money, and that’s an important aspect, because schools are struggling for money and this is a noble cause that pays a dividend.”

Schools — which can’t take advantage of tax credits — typically invest in solar by having their arrays owned by a third party. In Minnesota, community solar garden subscriptions offer another option.

Either approach offers predictable prices for electricity through long-term contracts with the owners of rooftop projects and solar gardens, Kramer said.

At least a dozen — and likely more — schools and school districts have subscribed to community solar gardens.

Dan Miller, Farmington’s director of operations, said the district saw no downside to the project. A handful of solar arrays will be ground-mounted so middle schoolers can gain a closer look, he said, and data from the generation will be shared with high schoolers for science classes.

The panels atop Dodge Middle School are also expected to provide as much as 60 percent of the school’s electricity needs.

“In a nutshell, it was a win-win situation,” Miller said. “We’re not out anything and we have some opportunity down the road to see if this is something we want to purchase from them…There didn’t seem a reason not to do it.”

One of the solar firms which most aggressively has pursued solar for schools is IPS Solar, which created a program called Solar4Schools. More than dozen Minnesota K-12 schools participate by subscribing to solar gardens, in addition to colleges and universities.

Ralph Jacobson, the firm’s founder, said a community solar subscription “can have a big impact on a school district. For little effort they see great savings.”

A solar garden in the St. Cloud area serving three school districts and a handful of other subscribers is expected to save its clients a total of $8 million over 25 years, according to IPS Solar vice president of business development Eric Pasi.

A 6 MW solar garden next to Red Wing’s high school will save the district $7.7 million over 25 years through money collected from a land lease and from savings gained from a subscription, according to Kevin Johnson, the district’s director of buildings and grounds.

“It was really fun for me to go before the school board because you’re usually asking for money,” Johnson said. “It’s huge because it goes not into my budget but into the general budget where it can be used for books and stuff for kids.”

In Red Wing and elsewhere the opportunity to teach about clean energy has been an attraction. “There’s not only benefits from the savings but benefits to curriculums of schools,” Pasi noted. “Students will have a chance to study the big data that can be collected from these projects and brought into the classrooms.”

Most schools that decide to have solar installed on their buildings have third party financing partners able to take advantage of tax credits and accelerated depreciation. A company based in Florida, Kenyon Energy, owns the solar installation on the Farmington schools.

Under the arrangement the school district signed a 25-year contract with Kenyon Energy and will have an option after seven years to buy the panels.

The company sells power at a reduced rate through a power purchase agreement that makes for predictable costs for a portion of schools’ energy needs, said Kramer.

Jane Houska, director of finance, said the district looked at different plans before deciding on going with a rooftop installation owned by a third party. Part of the district’s mission, she said, was to create an onsite project that would make students conscious of the importance of the environment.

Solar panels represented the district’s own visible attempt to showcase that ethos, she said, without the challenge of owning the system.

“I think for us it takes a lot of hassle off the school district,” said Houska. “We don’t know solar panels like they do and the project provides us an educational piece in addition to the cost savings.”

Farmington, however, also illustrates one challenge schools face in areas served by cooperatives. The district has considered expanding solar on to schools that receive their power from Dakota Electric Association.

Kenyon Energy receives capacity credit payments from Xcel Energy, the state’s largest utility, for electricity it produces on the Farmington schools. No such credit exists in many areas served by electric cooperatives.

The capacity credit “makes that system possible, but other utilities don’t have that same capacity credit,” said Kramer. “That’s something they’re desperately trying to ignore … but that might change.”

In fact, Lindstrom said the lack of incentives such as capacity credits may be stalling third party developers from working with rural schools.

For now, solar in schools appears to be mainly a trend in areas where Xcel operates. And for those who participate the rewards are many.

“It’s part of our strategic plan to be conscious of our environment and to teach kids the value of that,” said Houska. “We’re also stepping outside the box to save money we can use in the classroom.”