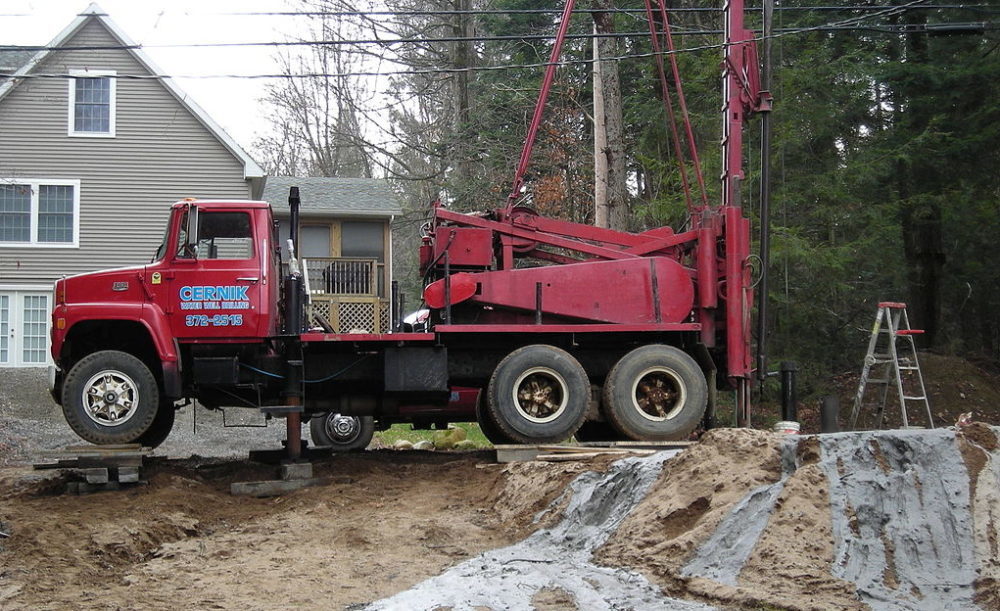 While solar has dominated much of the discussion of the Future Energy Jobs Act in Illinois, a new report highlights the job potential of a less buzzy — backers would say under-appreciated — clean energy industry.

The Environmental Law & Policy Center’s annual supply chain report for Illinois shows the state well-positioned to carry out the solar boom that the law is meant to create, with  almost 300 solar supply chain companies statewide.

But the report also features for the first time the geothermal industry, which according to the ELPC includes more than 130 companies statewide making or installing geothermal systems and controls. There are companies specializing particularly in geothermal, and traditional HVAC companies are increasingly offering geothermal to customers. In central Illinois, geothermal makes up for a tenth of all HVAC systems, the ELPC says.

Geothermal heating and cooling systems use underground looping pipes to tap the earth’s constant 55-degree temperature to regulate building temperatures. This can mean significant savings in gas and electricity charges with no pollution or fossil fuels directly involved.

Marcia Lochmann, the business development and sustainability director at the company StraightUp Solar, said they can hardly hire people fast enough to meet solar demand that has ticked up even before the impacts of the new energy law have kicked in. The solar developer, based in St. Louis with two offices in downstate Illinois, employs about 50 people and is quickly hiring more, she said.

“We’ll be hiring all across the board: labor — boots on the roof, engineers, design work, solar sales folks, project managers who help with permitting and planning, business development,  outreach and education, we have plans to hire across the board,” said Lochmann, who previously worked with community college training programs for solar installers. “Solar really is an economic engine in the community. And Illinois needs that.”

John Freitag, executive director of the Geothermal Alliance of Illinois, sees solar dovetailing nicely with geothermal in many places. Solar installations can be used to power the pumps intrinsic to geothermal heating and cooling.

“Geothermal is kind of a hidden technology,” he said. “I have solar also — everyone sees that, but I’ve had geothermal 18 years and it’s saved much more energy than my rooftop [solar] system will produce. They are in my mind a match made in heaven – solar and geothermal are the absolute answer.”

Freitag said that people in Chicago, where many of the state’s solar, wind and battery storage companies are headquartered, may not be aware of geothermal since the dense city is not ideal for it. But in the state’s sprawling suburban and rural areas, he said geothermal is popular and commonplace.

He said that in Quincy, Illinois, along the Mississippi River, “if you sit on Broadway and ask 100 people at random for a rudimentary explanation of geothermal, 80 or 90 could tell you what it is. Conversely on Michigan Avenue [in downtown Chicago], you’d be lucky of find five people who’d even talk to you about it.”

The ELPC’s map shows that despite the lower profile, numerous geothermal-related companies are located in the Chicago area. Meanwhile they are also spread throughout the state, including its southernmost reaches.

Freitag said a geothermal system of underground loops does not require as much space as some might think. His own system consists of 3,000 feet of looped pipe field in three 175-foot-deep boreholes, spaced 10 feet apart. Normally fluid is recirculated in a closed loop, though a property next to a river or lake could use that water in an open system.

Installing a system is significantly more labor-intensive and costly than replacing a typical hot water heater or central air system, meaning more job creation though posing a cost barrier for some customers.

In ComEd’s service territory, the utility offers to help pay for geothermal systems, to the tune of $1,000 per ton up to $6,000, Freitag said. The downstate utility Ameren discontinued supports for geothermal in recent years, and has focused more of its efficiency and renewable efforts on programs for low-income customers, a point of contention during Ameren’s negotiations with the state about its commitments under the Future Energy Jobs Act.

“Most of the geothermal projects are in [electric] co-op territory in Central and Western Illinois, but geothermal also works well for Northern Illinois,” he said. “We think about ComEd as being Chicago, but [its service territory] stretches to DeKalb and Rock Island. This is a new technology based on old principles that with modern equipment can provide very cost-effective energy. It’s creating jobs for people who do the installation, for the consultants, for engineers and financial people who design projects, and it benefits the environment.”

Freitag points to the Prairie Street Brewhouse on the Rock River in Rockford in Northern Illinois among various examples of businesses that have tapped geothermal energy for savings and environmental impact.

The ELPC report highlights the company Enertech Global, with its corporate headquarters located in Greenville, Illinois. The company has been around for two decades and in 2014 became part of the largest manufacturer of geothermal heat pumps in the world. The company employs about 50 people at its headquarters and hosts university classes on geothermal.

Enertech’s manufacturing is based in South Dakota, and Freitag notes that other major geothermal companies do their manufacturing in Oklahoma City (ClimateMaster), Ft. Lauderdale (Carrier) and Fort Wayne, Indiana (WaterFurnace). He’d like to see more manufacturing and doesn’t see any reason it couldn’t be in Illinois. He also wants to see more geothermal installation contractors, especially in Northern Illinois.

“We’ve been working on training initiatives to increase the number of contractors,” he said. “At last count we had 29 contractors (doing geothermal) for ComEd service territory. We have to turn 29 into 229.”