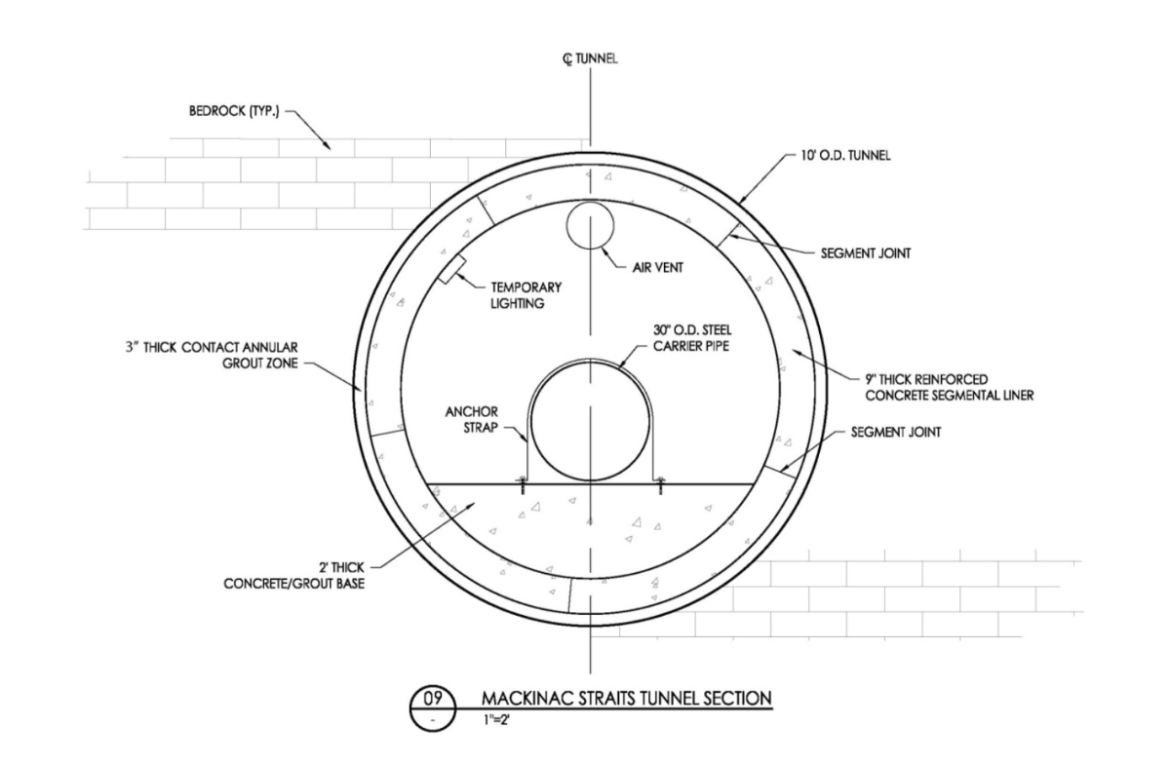 Roughly 350 feet below the surface of the Straits of Mackinac — about the same depth as a passenger rail tunnel that links England and France — Michigan officials envision a 10-foot-wide tunnel to house the controversial Line 5 oil and gas pipeline.

In the latest legal agreement between the state and Enbridge, the entities will partner on a study to “examine several possible techniques and allow a much more detailed examination on the technical feasibility of such a tunnel” to replace 64-year-old twin pipelines that rest on the lakebed.

In the final draft of an alternatives analysis released on November 20, engineers offer a preliminary view of how such a tunnel would be built, what it would cost and the associated risks of that option.

In short: There are multiple techniques for physically drilling the tunnel. It would cost about $153 million, based on the report’s estimates. And the risks are described in the report as “negligible,” given the tunnel design and the protective layers between the flowing oil, rock formations and water sources.

“The state has been pretty open when we find information (about Line 5) that’s alarming, and we’ve been open with information we found to be less alarming,” Valerie Brader, executive director of the Michigan Agency for Energy, told reporters this week. “One thing that did help was receiving the final alternatives analysis (that included) tunneling that reduces risk a great deal. We wanted to know more about that alternative.”

Brader added that the state is seeking more “technical feasibility” on tunneling, and that “shutting the pipeline down is still on the table.”

During a separate call with reporters, an Enbridge official characterized a potential tunnel as similar to the Detroit-Windsor Tunnel that cars use as an alternative to the Ambassador Bridge, “though not to that scale.”

An Enbridge spokesperson did not respond to follow-up questions from Midwest Energy News.

Environmental groups were quick to dismiss the plan, saying the study will be weighted towards Enbridge’s interests and, more generally, the continued operation of an oil and gas pipeline in the Great Lakes.

“The problem is this agreement favors a particular option, and that is building a tunnel under the Straits of Mackinac,” Mike Shriberg, executive director of the National Wildlife Federation’s Great Lakes Regional Center and a member of the state’s Pipeline Safety Advisory Board, told Michigan Radio this week. “It tasks Enbridge itself with doing that — this is the fox guarding the hen house — and sets us on a path that may lead to a tunnel, which I believe is the wrong outcome.”

The latest agreement with Enbridge also requires the company to tunnel Line 5 where it crosses the St. Clair River into Canada. While Shriberg said “that would obviously be progress,” and that he “wouldn’t argue” with the need for more tunneling study in the Straits, “I think it’s going to turn out and show the billions you would spend are not well spent, whereas I think we’ve got better options than this.”

Shriberg is also critical of the Snyder administration for not consulting with all members of the Pipeline Safety Advisory Board on the latest agreement, calling it “disingenuous” on the part of Gov. Rick Snyder and a “breach of process and a breach of trust.”

The alternatives analysis is meant to give a preliminary look at what it would take to dig the tunnel, and the potential impacts. The report considers a tunnel as well as an “open trench” option that, while less expensive, comes with greater risk of a leak directly into the Great Lakes.

The report also notes that while there is a sense of the type of rock formations that would be drilled based on construction of the Mackinac Bridge, it isn’t exactly known since borings made between 1939 and 1951 didn’t go that deep, according to drawings in the alternatives analysis.

‘Until somebody spends some serious money to characterize the geology under the Straits there, we don’t know what we’re talking about’

“In the end, no target formation was selected as the specific depth and conditions of the various formations at the tunneling depths considered are not presently known,” according to the alternatives analysis. “A comprehensive site-specific subsurface investigation and lab testing program would be required.”

Edward Timm, a retired Dow Chemical engineer who has provided independent analysis on the integrity of the existing pipelines, called it a potentially “major tunneling project.”

“The only thing I can say is that until somebody spends some serious money to characterize the geology under the Straits there, we don’t know what we’re talking about,” he said. “I’m not in the camp of environmentalists that consider it a horrible idea. It would certainly meet the engineering needs if the pipe could be run through a tunnel.

“The main problem is the rest of the 640 miles of pipeline that is in such bad shape. A tunnel is only a good option if Enbridge brought the rest of the line up to good condition. There’s very little discussion on the condition of the rest of Line 5.”

Under the tunneling option, the twin 20-inch pipelines in the Straits would be consolidated into a single 30-inch pipeline. It would be held up on a rail within a 10-foot-wide tunnel about 200 feet below the Straits sea bed in some places.

The report contemplates creating a relatively smooth tunnel diameter with a Tunnel Boring Machine or using a “drill and blast method,” and surrounding the pipeline with a concrete wall.

Within the tunnel, there are also options about whether to encase the pipeline with materials (“sealed annulus”) or leave it open, allowing for space to service the pipeline if needed.

“The sealed annulus option is more in line with the objective of isolating the pipeline from the open waters of the Great Lakes, and so is the configuration of choice for this study,” according to the alternatives analysis.

The report also calls the economic impacts on consumers and risk of contaminating the Great Lakes “negligible.” It cites nine other projects in North America that have been built or are under development that use tunnels for similar infrastructure.

“The risks associated with the potential for a release of Line 5 products to enter the waters of the Great Lakes from a Straits tunnel crossing of a design, as proposed, is considered to be negligible, and un-quantifiably low,” the report says.

The underlying criticism of the state’s latest agreement is that Enbridge has lost the trust of residents after findings in recent months that the company didn’t disclose some gaps in pipeline coating. Critics were quick to dismiss the tunneling study because it would be spearheaded by Enbridge and is an option that would effectively keep oil moving through the Great Lakes.

A group of Native American tribes in the region also denounced the tunneling option this week, saying it would continue to disrupt a valuable fishery.

Also, while Enbridge doesn’t transport heavy crude oil through Line 5 — and can’t based on a 2015 agreement with the state — one attorney says replacing the existing pipeline with a tunneling option could potentially allow Enbridge to do so.

In 2015, a state pipeline task force was notified there is potential demand for increased heavy crude oil use by refineries in Enbridge’s system. In the agreement, the state says moving heavy crude oil through the Straits “would present an unreasonable risk of ecological and economic harm.” (Enbridge did not agree with the state.)

The company would then have to demonstrate it’s consistent with a 1953 easement to operate the pipeline. If the state disagrees, it could set off a legal dispute between the two entities, according to the agreement.

“The tunnel option is a very dangerous one for Michigan — it also has the potential for giving the green light to open up Michigan to the transport of heavy tar sands oil,” said Liz Kirkwood, an attorney and executive director of For Love of Water (FLOW) who has advocated for years to close Line 5 in the Straits. “There are provisions in that (2015) agreement that would enable Enbridge to go to court and say, ‘We need to transport heavy tar sands.’ It’s not an absolute prohibition.”

Spokespersons for the Michigan Agency for Energy and the Attorney General’s Office did not respond to questions about whether a tunneling option could potentially allow Enbridge to move heavy crude oil on Line 5, each calling the scenario “hypothetical.” Enbridge also did not respond to the question.

In a statement earlier this week, the company said: “Trust is earned, and while we have a long way to go, we remain committed to doing what it takes to rebuild trust and uphold our pledge to protect the environment while safely meeting Michigan’s energy needs.”

Kirkwood added that tunneling Line 5 still “does not reduce the risk for the other potential spills along U.S. 2 (in the Upper Peninsula), for example.” She is concerned that allowing a tunneling option would lead the company to pursue expanding capacity through the Great Lakes that will “send a signal and green light for other companies to follow suit.”

With at least a rough outline of what a Great Lakes oil pipeline within a tunnel might look like, state officials maintain that it’s preliminary to say it will eventually happen. As part of its latest agreement with Enbridge, Snyder says a final decision on the pipeline’s fate will be made in nine months.

Brader said the agreement sets a “process that will be the basis for a decision on the future of Line 5. … At this point, any final decision on the pipe will be reached in August 2018.”