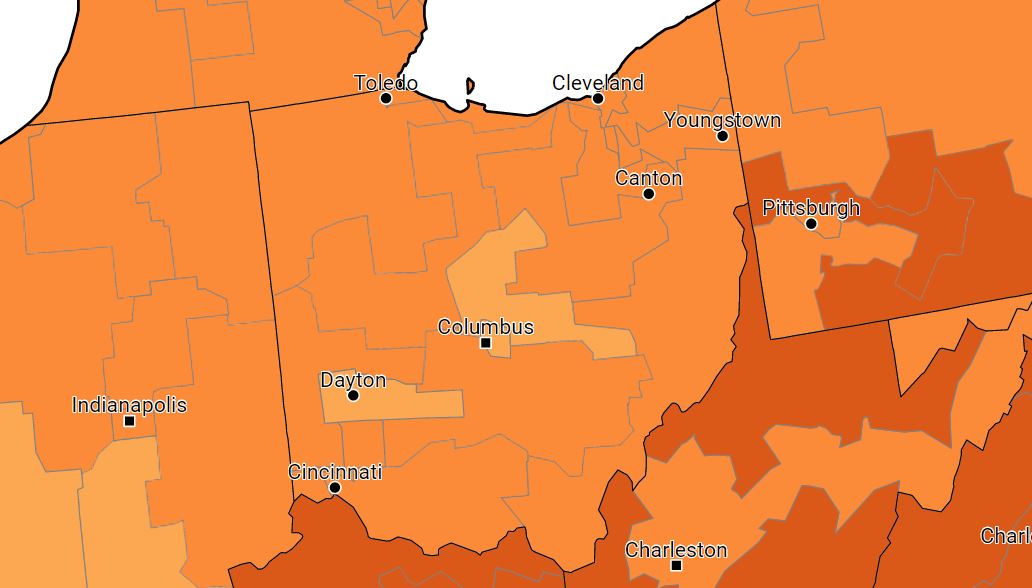 A majority of both Republicans and Democrats throughout Ohio favor clean energy policies, such as regulating carbon dioxide emissions as a pollutant and more government funding for renewable energy, according to a new interactive map.

Moreover, people would favor those policies despite substantial divides on acceptance of climate change science and perceptions of risk from climate change impacts, said Anthony Leiserowitz at the Yale Program on Climate Change Communication, which released the map last week.

The map presents survey results at the national, state, and congressional district scales. Leiserowitz and his colleagues reported on the work that produced the map in the December issue of Climatic Change.

The new map could be a tool for groups working on the ground for policies to address climate change and support for clean energy, Leiserowitz notes. “The whole point of politics is [to] find policies that very different types of people can come to support for very different reasons,” he said.

The data also shed light on public opinion as Ohio’s General Assembly continues to debate bills, ranging from subsidies for coal and nuclear plants to once again revisiting the state’s clean energy standards.

The new map and study build on earlier work tracking opinions on climate change and energy within Ohio and nationwide. A statistical technique called downscaling let the researchers estimate public opinion among registered Democrats and Republicans by state and by congressional districts within states.

Questions in the survey tested basic understanding about global warming. “You’ve still got some fundamental communication and education to do in the state of Ohio,” Leiserowitz said.  For example, “less than half of registered Republicans understand that it’s even happening,” he continued. “About which, of course, there’s literally no dispute.”

Even among Ohio Democrats, he noted, only 69 percent statewide say that climate change is mostly caused by human activities, while 21 percent say it’s mostly from natural causes.

Despite deep divides on acceptance of climate change science, a majority of both parties in Ohio support funding research for renewable energy, such as solar energy and wind power. At least 70 percent of Republicans in all of Ohio’s congressional districts said they would support that policy, compared to 84 to 92 percent of Democrats.

“That suggests there is a natural political wind behind more renewable energy in Ohio,” Leiserowitz said.

Similarly, majorities in both parties supported regulating carbon dioxide as a pollutant: 53 percent for Republicans and 84 percent for Democrats. A 2014 Supreme Court decision said the Environmental Protection Agency could regulate greenhouse gases, subject to some limitations.

And although more than half of Ohio Republicans disagreed with requiring utilities to produce 20 percent of their electricity from renewable sources for an extra $100 per household, 47 percent nonetheless would support that policy.

Even at that, a majority of voters statewide would support that kind of renewable portfolio standard, other data from the Yale Program on Climate Change Communication showed. Earlier this year, the Ohio House of Representatives passed House Bill 114, which would essentially make the state’s renewable portfolio standard voluntary by removing penalties for noncompliance. The bill remains pending in the Ohio Senate.

Earlier this year, The Nature Conservancy’s own polling data showed that even in southeastern Ohio’s “coal county” a majority would tell their elected officials to support policies encouraging energy efficiency and renewable energy and would be willing to pay more for that on their electric bills.

Nonetheless, substantial partisan gaps remain on whether people accept climate change science and understand the risks, Leiserowitz said. Moreover, he noted, there’s probably no one-size-fits-all argument that will sway all voters, or even all members of a political party.

“In the end, there are different types of Republicans, and each of them are probably going to take a slightly different pathway to engaging on the issue of climate change and clean energy,” he said.

“But I would say as a general principal that there’s a lot to be gained by reframing climate change and clean energy, when appropriate, in terms and language and values that they find natural to them,” Leiserowitz continued.