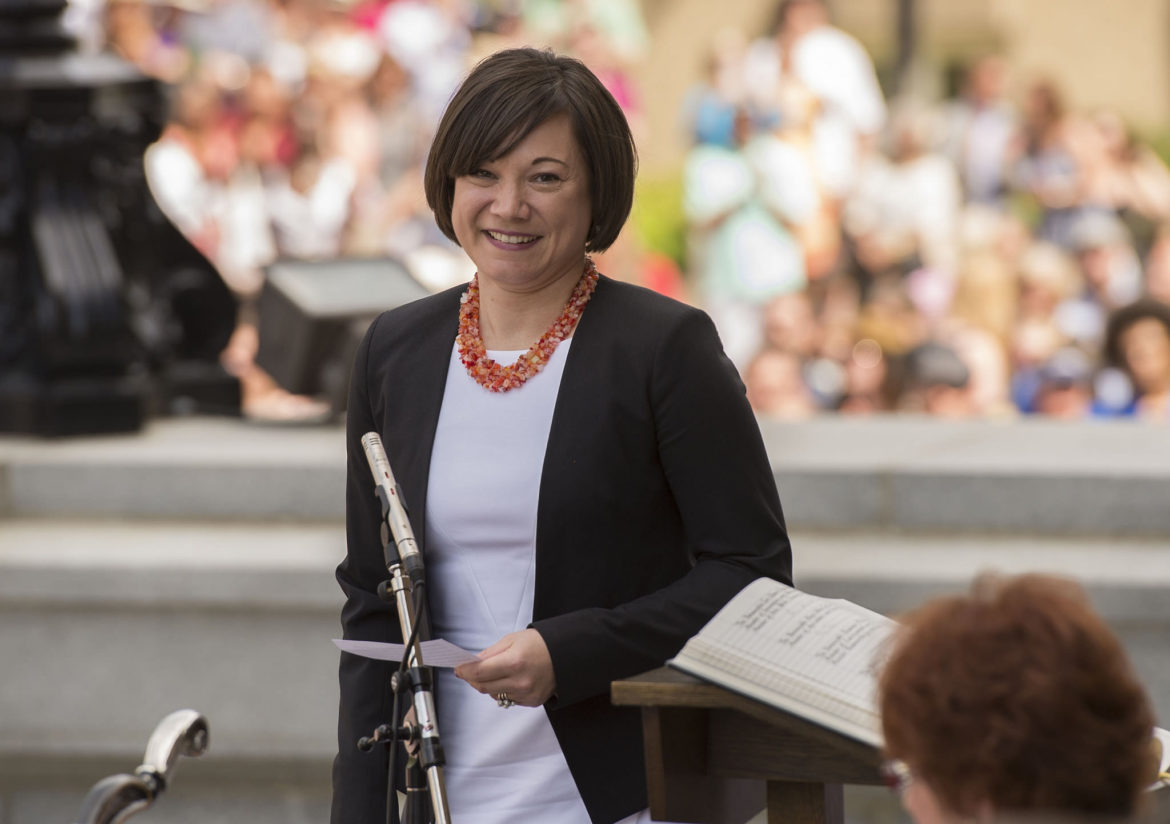 Shannon Phillips, Alberta's Minister of Environment and Parks, is seen at an event in Edmonton in this 2015 photo.

Shannon Phillips, speaking at an event at the University of Minnesota’s Institute on the Environment, said Line 3 – currently under review by state regulators — is a safer and more environmentally sound approach to moving oil than the alternatives.

The economies and fortunes of Alberta, where Enbridge is located, and Minnesota are intertwined in many ways, she said. All the gasoline refined and consumed in the state comes from the province’s tar sands, which has a higher carbon footprint than conventional oil.

Despite that, Phillips said, if the state’s oil supply does not come Alberta it will come from someplace else, such as Saudi Arabia, where women can’t drive, or Russia, Venezuela and other autocratic countries.

Even gas from Texas or North Dakota originates from states with far fewer environmental regulations than Alberta and much less commitment to combating global warming, she stated.

“Blocking one project doesn’t mean oil doesn’t get to the market,” she said. “The oil will not come from a place with a carbon tax, a plan for reducing methane emissions or with an emissions cap” on pollution from oil production.

Prime Minister Justin Trudeau, approved the Line 3 portion in Canada – as well as the Trans Mountain project from the tar sands to near Vancouver — in 2016 because of Alberta’s climate action plan, she said.

“He directly cited our Climate Leadership Plan because at the other end of that pipeline is an oil source that is subject to the most rigorous climate policies on the continent,” Phillips said in an interview later.

“Our oil comes from a progressive energy producer with robust environmental regulations in a place and which has pushed our own national government to do more.”

Phillips spoke to Midwest Energy News about the province’s climate leadership after the event. The transcript has been edited for length and clarity.

Midwest Energy News: Tell me about how and why your government created a climate action plan. What prompted it?

Phillips: The situation we inherited was one where environmentalists were speaking to companies about climate change in 2013 and 2014 but the missing partner at the table was the government. You had a corporate and civil society consensus about climate change and you had an unimaginative government that could not find its way to create a public policy. When we had a (political) change, we made change.

We have an urban/rural divide in the United States. As a progressive you seem very aware that ordinary Canadians fear that moving away from a fossil fuel economy will result in job loss. How can that fear be mitigated?

Most people in rural areas rely in some way, shape or form on resource extraction. For a lot of ordinary people “transition” sounds like transition to unemployment insurance, not transition to a different type if job. That’s why these things must be undertaken gently and thoughtfully. The offer to ordinary people at the end of the day is that the new economy will not replicate the social exclusions of the old, and that as the economy changes the wealth gap narrows, not widens.

What are your favorite achievements so far?

One big one was we executed complex agreements with our incumbent coal fired generators in a way that was collaborative and will phase out coal by 2030. We know we’ll be avoiding tens of millions of dollars in health care costs by closing them. The phase-in of renewables has started; the bids we received for wind power have been jaw-droppingly low. We have 5,000 megawatts in total and people who watch this are saying this will be game changing. It’s good news for the power market.

What about the carbon tax?

It has raised $3 billion so far, and $1 billion was given back in rebates (to consumers) and in small business tax cuts. Sixty percent of Albertans got a rebate. They started paying their carbon tax on Jan. 1, 2017 and they got their first rebate check Jan. 4 because we pre-paid that. You get a rebate if you’re single and earn less than $54,000 annually and if you’re a family responsible for at least one child and made less than $93,000 a year. You get a rebate based on Alberta’s average energy use.

How did it impact small businesses?

And what about the macro economy?

Overall, our tax burden is $7 billion less than the second closest province. We’ve revised our economic projects upward twice and we lead the country in economic growth this year and will next year.

In what do you invest the remaining portion of the carbon tax?

We have $1.4 billion in commitments over seven years going to clean energy innovation, including a lot of money ($440 million) for improving oil sands production.

How long will carbon tax last?

Over time we know we’ll collect less carbon tax because you don’t want this revenue stream to last forever.