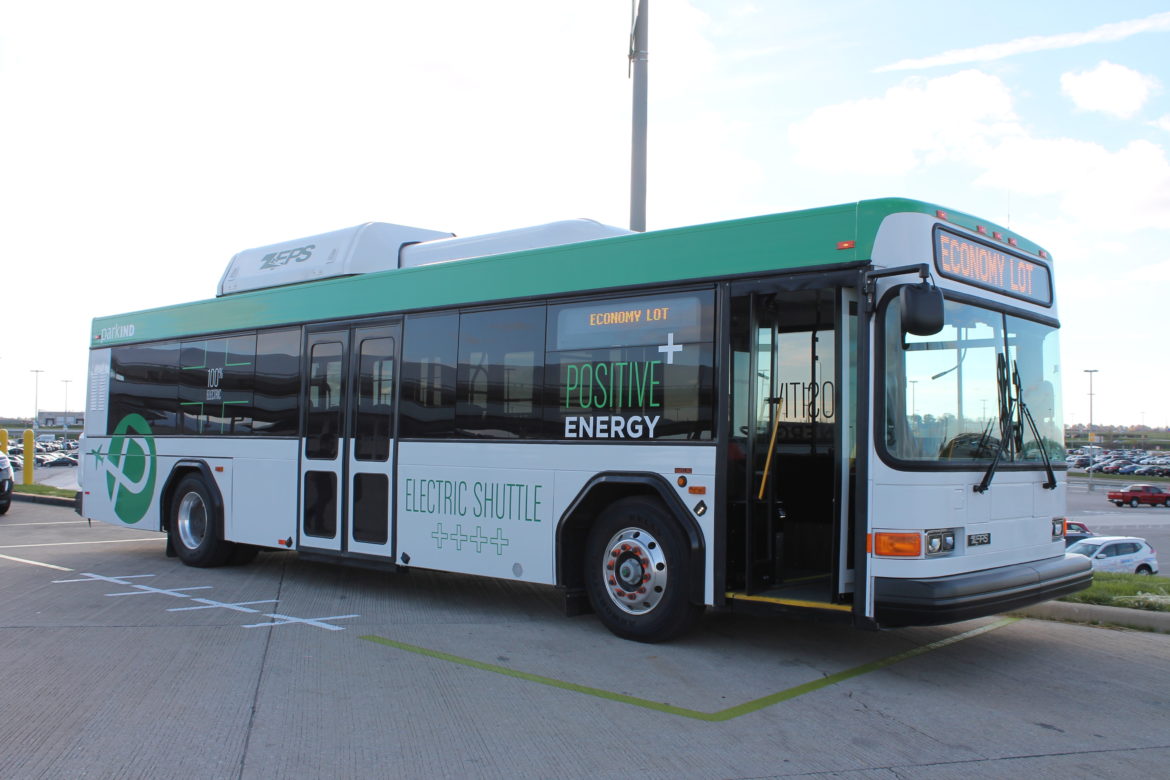 One of six electric shuttle buses in use at the Indianapolis International Airport.

Shuttling between airport terminals on noisy, smelly buses can be one more headache for weary passengers.

It can also be a source of air pollution when fleets of diesel-powered shuttles run around the clock.

At the Indianapolis International Airport, the situation for passengers and the environment has improved with a fleet of electric airport shuttles that officials say will be the nation’s largest — at nine — once three new shuttles arrive next year. There are already six electric shuttles working the airport, and airport executive director Mario Rodriguez said an additional four will be ordered and put into service around 2020, bringing the total to 13.

Rodriguez is hopeful the airport will receive more ZEV grants, and he said they will continue buying electric shuttles regardless.

While the up-front cost difference is large, electric vehicles yield significant savings over time in fuel costs and maintenance, as electric vehicles are much simpler and cheaper to maintain than engines using liquid fuel.

In fact, Rodriguez said the airport expects to save $2 million in maintenance costs and avoid buying 66,000 gallons of diesel over the 10-year lifetime of the buses. Or rather the lifetime of their batteries — buses can usually be refurbished or outfitted with a new battery for a longer life.

“If they prove to be as solid as we believe they are, we probably could use the same buses for years to come, and just change the batteries,” Rodriguez said. “Most of this technology is completely proven. The electric motor is beautiful. It will last forever. The only thing we have to do is change the battery packs.”

Rodriguez considers the shuttles to be largely powered by solar energy since the airport boasts a solar farm capable of generating more than 20 megawatts that sends energy back to the grid.

While there may not seem to be a large amount of consumer choice involved in what airports people pass through, Rodriguez thinks the airport’s ambitious sustainability projects actually influence passengers and local residents enough to affect the bottom line. Among other things, Indianapolis was the first U.S. airport to win LEED certification for an entire terminal campus.

The electric shuttles specifically are also a selling point, he added.

“The passengers, they love it,” he said. “It’s quiet, it’s comfortable, it improves customer service. There’s no jerkiness with acceleration like you would get with a normal bus. It really is an improvement in customer service, it is an improvement for our drivers — our drivers love these buses. You don’t have to start it up, warm it up, do a bunch of things to it, it just starts.”

Many clean energy and transportation experts think it is only a matter of time before electric is the default power source for vehicles large and small. Electric cars are becoming increasingly popular and affordable, Tesla and other companies are developing electric semi-trucks, and school districts and transit authorities are increasingly eyeing and buying electric buses.

Rob Kelter, senior attorney for the Environmental Law & Policy Center, said the Indianapolis electric shuttles are a good example of how federal supports like ZEV grants can help accelerate an electric vehicle transition that will eventually have its own momentum.

“This is what good government programs do,” Kelter said. “They help get something like this started, and as the market develops and the price comes down, these incentives aren’t needed. This is a great new program and we hope it catches on in airports around the country and also that other people who have an opportunity to electrify their buses will take a look at this.”