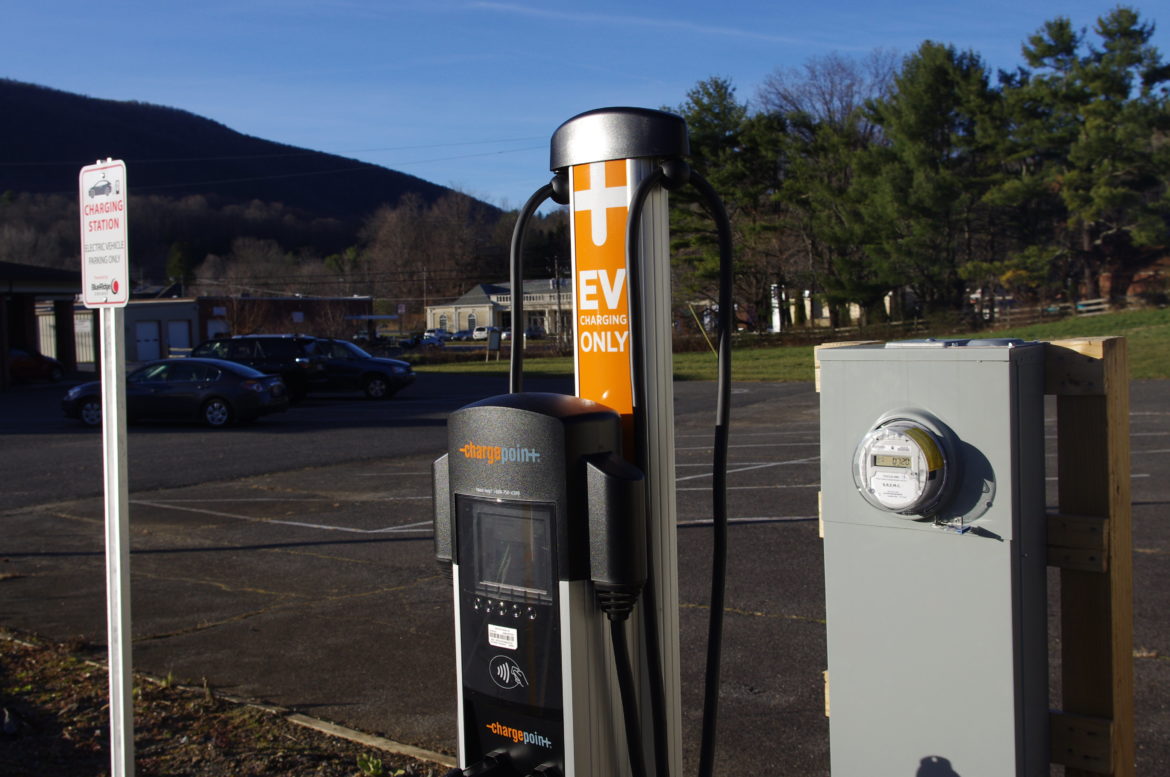 A train station put the tiny mountain town of West Jefferson, North Carolina on the map.

A century later, some hope electric-vehicle charging stations will help keep it there.

West Jefferson is among the first communities to benefit from an effort by North Carolina’s 26 electric cooperatives to lure electric-vehicle drivers off the beaten path to remote and scenic areas they might have otherwise avoided out of range anxiety.

The push by the cooperatives, which cover nearly half the state’s land mass, comes as North Carolina decides whether to spend $13.8 million on charging infrastructure from a settlement with Volkswagen for producing illegally-polluting vehicles.

“If each of these electric cooperatives had charging stations in their area,” said Kristie Aldridge, who works with the statewide association of co-ops, “then we could get people moving across the state and boost our state’s tourism.”

In West Jefferson, tourists can plug in for free at one of two outlets that produce a full charge in three to four hours. Meanwhile, they can peruse nearby art galleries, visit the famous Ashe County Cheese Factory, or catch a movie in the town’s historic theater.

“We really worked with the towns to find optimal locations in a downtown area,” said Jon Jacob, a marketing manager at Blue Ridge Energy, the co-op that serves the state’s northwest corner. “Shopping, restaurants, parks, movie theaters, were really important.”

Thirty miles to the south, the town of Blowing Rock met another key criterion for Jacob: close proximity to the Blue Ridge Parkway, the two-lane scenic highway that stretches nearly 470 miles across Virginia and North Carolina.

Farther south in Lenoir, a third Blue Ridge Energy station — a DC fast-charger that works in a half hour — is on U.S. Highway 321, a major thoroughfare for travelers heading to and from the Blue Ridge Mountains’ scenic peaks.

In the state’s southeast corner, Brunswick Electric has installed five chargers to cater to beachgoers. In the center of the state, the Randolph cooperative plans a charging station to serve visitors at the North Carolina Zoo.

American car-buyers can choose from nearly two-dozen models of plug-in vehicles. Yet the average electric vehicle in North Carolina travels less than 100 miles on a full charge. That works for commuters going between home and work, but for longer trips plug-in owners need assurances of regular charging stations along the way.

North Carolina’s current charging network is small for its 7,000 registered electric vehicles. Today, 476 stations offer one outlet for every seven cars; the ideal ratio is closer one in five, experts say. In addition, the majority of stations are in major metropolitan areas. Fifteen percent are only for those who own a Tesla, which makes its own brand of chargers.

“There are gaps,” said Rick Sapienza of the North Carolina Clean Energy Technology Center. “Toward the beach, out toward Asheville.”

Volkswagen plans to install as many as two dozen chargers in the Raleigh-Durham-Chapel Hill Triangle region, and DC-fast chargers on major thoroughfares: I-95, I-85, and I-40. But those plans still exclude parts of rural North Carolina eager to cash in on the state’s booming tourism industry – which generated a record $22.9 billion in spending in 2016.

“When you looked at a map of charging stations, northwest North Carolina had none,” said Jason Lingle of Blue Ridge Energy. “There was a big void.”

‘It helps you get on a map’

The nonprofit co-ops see advantages of charging infrastructure beyond tourism. Overnight charging can even out electricity demand. The money co-op members save on gas can go back into the local economy. And an increase in electric vehicles can decrease air pollution.

“It’s a very environmental area,” said Renee Whitener, communications manager at Blue Ridge Energy. “We have a good segment of our membership that really is appreciative of environmentally-focused efforts like this.”

So far, relatively few drivers have taken advantage of the co-op’s charging stations: they were used only 135 times between the spring and the end of October. (For comparison, the city of Raleigh, the state’s second-largest city, says its public chargers have been used over 9,400 times).

“Even though 10,000 aren’t directly benefiting right now,” said Lingle, “[usage] should grow exponentially as more electric vehicles come into the marketplace. And every month, it continues to grow.”

In West Jefferson, town manager Brantley Price was upbeat about the 21 times the charger had been used through October – and about having one more attraction to draw visitors.

“It helps you get on a map,” he said. Over time, “hopefully other people with these cars will find us.”