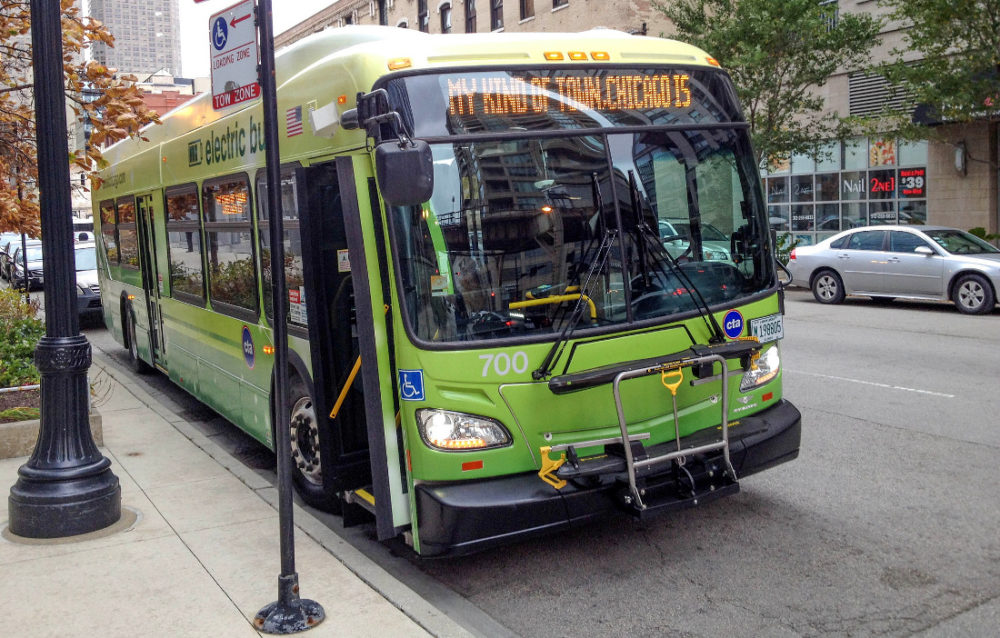 An electric bus in Chicago.

As part of Chicago’s ambitious plan to modernize its transit fleet, the city is now accepting proposals for as many as 45 new electric buses, along with the design and construction of charging systems to be installed along the routes.

Nearly two years ago, Mayor Rahm Emanuel and Dorval Carter, Jr., president of the Chicago Transit Authority, announced their intention to spend as much as $40 million on 20 to 30 electric buses over a few years.

The request for bids suggests the city could nearly double its planned expansion of electric buses—although, the request includes a base order of just 20 all-electric buses plus charging system design and construction. Tammy Chase, a CTA spokesperson, said the remaining 25 buses are a contract option and a new funding source would need to be identified.

For now, CTA officials haven’t awarded any contracts, and Chase declined to offer any details about bidders or potential bids. She did say that a contract will be awarded next year.

The mayor’s office is touting the proposal as a key piece of its plan to combat climate change. “One of the best ways to reduce our carbon emissions is by not only helping people get public transit and incentivizing and providing pathways for walking and biking but also cleaning our fleet at the same time,” said Chris Wheat, Chicago’s chief sustainability officer.

“Earlier this year, the Chicago Transit Authority put a request for proposals out on the street for 45 new electric buses and the charging facilities that go along with it,” Wheat said. “We think it’s really a strong first step—in addition to the two electric buses that we have now— in terms of cleaning that fleet.”

The call was put out in October, and CTA will be accepting proposals through the end of January.

Some advocates have argued that urban transit is the electric vehicle sweet spot. Here are a few benefits: They produce almost no greenhouse gas emission. They are far cheaper to operate than buses powered by diesel fuel or natural gas, and they are much quieter and roomier than more traditional public buses.

Chicago officials estimate that a single electric bus in an average year will save the city $25,000 on fuel and $55,000 on estimated health care costs.

Still, the upfront cost for an electric bus can be expensive—up to $300,000 more than for a diesel-powered one.

Chicago currently has two fully electric 40-foot-long buses, which were made by New Flyer Industries Inc. and are powered by lithium-ion batteries. The two buses have traveled more than 25,000 miles while carrying 100,000 passengers on 13 different routes.

The buses first hit the streets in October of 2014, and CTA officials say they can travel 80 miles on a single charge. Electric bus battery technology has evolved significantly in the last few years, and the potential range of new vehicles has expanded greatly.

Electric bus sales have flourished in the last couple of years, thanks in part to the cost of batteries, motors and other electronic features declining with an increase in the volume of sales.

Analysts at Navigant Research found that electric bus sales increased by 40 percent from 2016 to 2017. Lisa Jerram, principal research analyst, said: “New orders for electric buses are growing rapidly, although the transition to battery electric buses will take many years, as agencies test the technology and bus manufacturers ramp up production.”

When he announced the decision to purchase electric buses in 2016, Mayor Emanuel said: “Expanding the CTA’s electric bus fleet provides customers with dependable service while continuing my commitment to making Chicago the greenest city in the world and protecting the environment for future generations.”