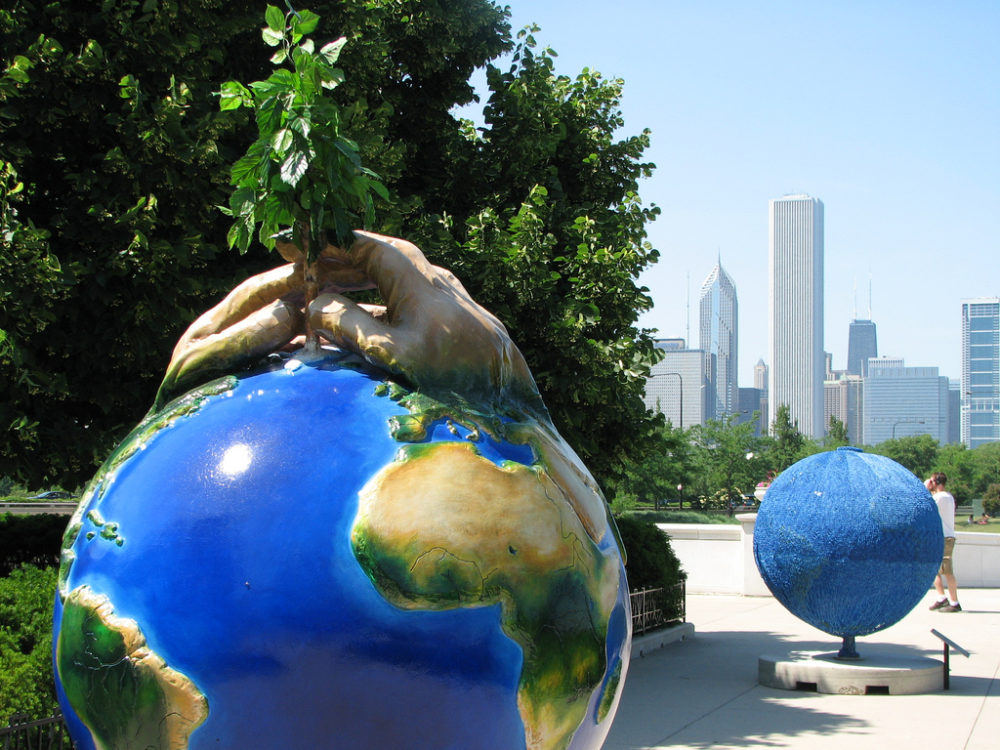 Each fall, Chicago throws a Humanities Festival to promote “the lifelong exploration of what it means to be human,” attracting thoughtful authors and expressive performers. Two lectures on a recent Saturday afternoon provided fresh perspectives on how environmentalists combat pollution and envision a healthier planet.

For me, those discussions revealed how we can tap different threads — specifically faith and literature — to make our cases more effectively.

Dick Munson is the director of Midwest clean energy for the Environmental Defense Fund.

Al Gore, as you might expect, spoke eloquently about climate science and the threats facing creatures and ecosystems. Yet it was his answers to the interviewer’s questions about faith that were most revealing – and engaging. The former vice president seemed hesitant initially, perhaps thrown off from his regular pitch about climate change, yet he slowly became passionate about the “ungodly environmental crisis” we’ve created, and he acknowledged attending Vanderbilt University Divinity School in order to explore “spiritual issues.”

Gore admitted being uncomfortable putting “religion on his sleeve,” yet he increasingly revealed how his faith served as the foundation for his environmental activism. He discussed our ethical “responsibility” to the planet and future generations. He described clean air and clean water as guideposts by which we must determine the difference between right and wrong.

What struck me is how faith and morality are, to a large extent, foreign to the modern environmentalist’s lexicon. Gore’s own book, Truth to Power, calls the climate movement a “great moral cause,” yet it rarely mentions the role of religion or spiritualism. His publications and prepared remarks instead focus on science and political activism, with step-by-step recommendations for how to win climate arguments. That approach is common among clean-energy advocates, but it also is sterile, a somewhat passion-less connecting of the dots to explain evidence or lobby lawmakers.

No doubt religious leaders speak passionately about the environment. Pope Francis in June 2015 issued an encyclical on ecology in which he observed: “Never have we so hurt and mistreated our common home as we have in the last two hundred years.” While discussing the more abstract problems associated with climate change, he highlighted how pesticides now contaminate farmers’ soil, air pollution poisons cities, deforestation kills entire species of animals, and man-made wastes foul drinking water. The Pope called on faith to guide us: “The entire material universe speaks of God’s love, his boundless affection for us. Soil, water, mountains—everything is, as it were, a caress of God.” Similar urgent pleas have been issued by Jewish, Muslim, and other spiritual leaders.

While environmentalists applaud such messages, they tend to shy away from making them. Part of that reluctance results from the political polarization of climate change debates, with a segment of evangelicals denouncing human efforts to address pollution. Rep. Tim Walberg (R-MI), a graduate of evangelical schools, argues, “If there’s a real problem, (God) can take care of it.” Environmentalists may not want to be aligned with the other political views of such evangelists, yet they can’t cede to them the moral argument against pollution. Even politically focused environmentalists should recognize that three-quarters of Americans belong to a religious group and many understand the world through a religious lens.

Although it wasn’t her intention, the second speaker that Saturday afternoon in Chicago, Claire Vaye Watkins, revealed another way in which environmentalists need to expand their vocabulary. In this case, the author suggested literature, too, can help defend the planet. Her novel, Gold Fame Citrus, uses a global-warming-induced drought in Southern California to frame her story about hope and cherished relationships. Hers is a surreal landscape, an ocean of sand that reflects a world broken by environmental disaster. Into this nightmare she describes how families cope, introduces a tender humanity, and conveys a nostalgia for the living world.

Watkins, after her presentation, suggested that environmental advocates can take better advantage of imagination. Humans, she said, love stories and activists must use them to reveal threats and offer hope.

Watkins is not alone in setting novels and short stories where the climate is stressed. An entire genre, in fact, is developing, what some call climate fiction, or “cli-fi” for short. It focuses on a dystopian present in contrast to the dystopian futures highlighted in conventional science fiction.

This cli-fi genre serve two key purposes, one for writers and one for environmentalists. “I think we need a new type of novel to address a new type of reality,” said Nathaniel Rich, author of Odds Against Tomorrow. “And it’s the novelist’s job to try to understand, what is that doing to us?”

Environmentalists, moreover, need to appreciate that novelists can reach people in ways scientists and political activists cannot, that fiction, in fact, may be the best untapped means to deliver information and messages. We can learn from Barbara Kingsolver, winner of the National Humanities Medal and author of Flight Behavior, who asked: how is it “possible to begin a conversation across some of these divides, between scientists and nonscientists, between rural and urban, between progressive and conservative—that when it comes to understanding the scientific truths about the world, there must be another way to bring information to people … that’s beyond simply condescending and saying, ‘Well, if only you had the fact. If only you knew what I did, then you would be a smart person.’ That gets you nowhere.”

Environmentalists, in their effort to combat climate change, have turned increasingly toward science and rationality. Those languages, of course, are valuable and necessary. Yet Gore and Watkins reveal that we also must embrace faith and stories. To be effective, we need to expand our cultural vocabulary.

Dick Munson is the director of Midwest clean energy for the Environmental Defense Fund.

One thought on “Commentary: To fight climate change, we must change our vocabulary”